It's been a long time since I posted last- I've had a lot going on and not much to show for it.

Let's see- I've been looking for work.  Jobs are scarce as hen's teeth these days, but you still have to have something to show the unemployment folks every week if you want to continue to collect unemployment.  And now I have to go to some 'reemployment workshop' in January, which is mandatory. *Sigh*.

I knit Steve another hat and he liked that one fine.  Then I knit my niece a hat for Christmas and was really gratified that she loved it. She wore it all the rest of the day, even though we were in the house.  She's a teenager, so I was afraid of not being able to please her but I managed, so yay!  We also played poker Christmas evening and you'll be relieved to hear that as the only woman at the table, I had the most chips until I just couldn't stay up any longer at which point all the guys said that it was past their bedtime too.  So I won. Yay!

I have a spreadsheet put together for my crop schedule.  It will take the frost dates and planting dates, factor in the days to maturity and give me the harvest dates.  Yesterday I got most of my seeds ordered from two different outfits- Territorial Seed, which is here in Oregon, and Peaceful Valley Farm, which is in California- they specialize in organic seed and have been doing so since '76. I tried to order my seed potatoes from Seed Savers Exchange, but after their website led me through a couple of hoops it came back and said their website was closed for ordering once I'd hit the submit button.  So I will try them again on Monday.

Which reminds me that I need to contact Burnt Ridge Nursery in Washington to find out if I can add some fig trees to my tree order.  Steve and I decided to plant fig trees in strategic places instead of building an arbor across the back of the house.  It would be much, much cheaper, although it may take awhile for them to get large enough.  I'm thinking of growing our hops along the side of the house so that we can have some fast shade for the west side of our dark brown house, because last summer was brutal.  We had two days where the temperature was 106F and one at 105F, and we have no air conditioning and don't plan any.  It wouldn't have been quite so awful, but it never cooled off those nights like it usually does, so it was still in the eighties in the morning.  And who says there's no such thing as global warming?

Speaking of which, I'm really disgusted with our world leaders that they didn't get a climate treaty signed in Copenhagen in December.  It looks like if we're to save the planet, it's up to the various people of the world to do the leading, take the initiative, and change their lifestyles and habits to try to ameliorate what's going on here.  There are several arguments out there that dispute the fact that mankind caused global warming, and it is possible that this is a natural occurrence.  There is also the recent news that some of the numbers may have been skewed and global temperatures are on the decline.  It's certainly getting colder here in the Portland area of Oregon- we just had two and a half inches of snow here- not nearly as bad as last year's storm, but hey! It's still early in winter yet.  What cannot be argued is the fact that glaciers all over the world, not just at the poles, are melting and receding, and the permafrost is also melting.  It's not supposed to- that's why they call it permafrost.  So even if you don't believe in global warming, it would probably behoove us all to get our heads out of the sand or wherever it is we keep them and start doing our individual bits to make changes that will help.  If our leaders can't agree because China doesn't want to disadvantage themselves, or the developing countries don't think it's fair they don't have the opportunity to pollute as they grow their economies, I say tough. I won't buy anything from China, if I can consciously avoid it because I don't like their trading tactics, or human rights record, and I don't want to be responsible for the embodied carbon in their products or the carbon it takes to get them here.

I wish I could quickly come up with more concrete things to do- I already use public transportation for commuting (biking is out due to health and distance), and I'm working on my own self-sufficiency, but I think the time for a global grassroots movement is now, because our so called leaders are failing us.

We need to bite the bullet now and think and act for the long term, or else there won't be one.

Bits and Pieces and a Hat to Boot 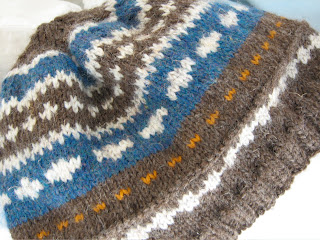 
Well, I finished it, but I'm not 100 percent happy with it.  I did learn a lot making it though!  I've already started the next one, but am knitting crown-down instead of brim-up.  This one doesn't quite fit Steve's big cabbage either, even though I measured both his head and the hat.  So I'll wear this one and make him a better one.

It is cold- this morning was 14, which for the Portland metro area is pretty darn cold.  It's super-dry as well.  Today we are having a ton, AKA a pallet, of Bear Mountain bricks delivered to stretch the firewood, through which we are blowing like there's no tomorrow.  I have a stash set aside for power failures, because if we ran out of wood, really, we can turn on our gas furnace.  But during a power failure that's not an option because it runs on electricity. Burns gas, but runs on electricity. So no heat in a power failure.  We're supposed to get freezing rain this weekend, so we'll see.   In the meantime, I have to suit up and go clean and rearrange the garage so we can fit a pallet of bricks in there.

I also want to move the workbench under the window in the garage, and rehang a couple of fluorescent lights that are out there, with the intention of starting seeds on it. I find that I am more comfortable working wood on my sawhorses, which are a better height for me than the bench, which is darn hard to lean over and grab a tool from the hanging cupboard.  I was pretty stoked when we bought the place that the workbenches and tool storage were staying, but they don't exactly fit me. I am, how you say, vertically challenged.  So the bench may as well be a seed starting table. Which reminds me that I need to get my crop schedule done.

This week has so far been spent researching unemployment insurance, and finding out that just looking on Craigslist for a job doesn't count.  I have to apply or send my resume and talk to somebody, which is really hard when what I do is kind of specialized, and there's not a lot of call for it. Plus-  most of the jobs listed are for management, and I am seriously unqualified for them. They want six years' experience, I have three.  They want a college degree, and I don't have one of those.  I learned from one place I worked that my lack of degree didn't really matter because I could out-think and out-write most of the folks I worked with, most, if not all of whom had degrees.  But employers want to see the sheepskin, and I can't produce one. And would never in a million years lie about it, either.  However, something will turn up- it always does.

But now to the kitchen, and then to the garage!  And I know exactly which hat to wear, even if I don't have a sheepskin.

The Cat Wants A New Hat

We are having a gorgeous day here- thirty-six Fahrenheit and super clear. Once of those crisp, late-autumn days that you have to be dead to not enjoy.

Ever since getting home from Thanksgiving away, I feel like I've been behind the eight ball. I haven't been able to get to start on the hutch, and now his lordship wants a new hat for Christmas, which he really needs.  He has some cheap, black watch cap that is looking very tatty and since he's balding, I'm concerned that his head is cold.  So I am in the process of knitting him one, which will be a challenge because I've never knit a cap before.  He also wants some color variation in it, which will also be a trick because I've never done that before either.   However, if he doesn't like it, I'll wear it.  I spent several months knitting him a Guernsey-style sweater, which was the first sweater I ever attempted. I had to adjust it, because of the whole gauge thing, and because Steve is very long.  Anyway- he tried it on when I was done with it, but won't wear it because it makes him "feel like a serf".  It's way too big for me to wear, but I can probably wear the hat when it's done.

Now all I have to do is find a number five circular needle that's sixteen inches long.
Posted by Paula at 10:25 AM No comments: