I promised I'd tell you about my new freezer, which was delivered last Thursday.  The reason I want to tell you about it is not to blow my horn, but to persuade women out there to do more for themselves when it comes to getting a deal.  It all boils down to the first piece of advice, and that is....

If you want a deal, you have to ask for one.  The worst that could happen is that they'll say no.  The other side of the coin is, you could get a deal.  There have been countless times I get a deal simply because I ask for one.  When the cider press and crusher combination Steve found for me at the garage sale was marked $45, I got it for $40, simply because I said to the woman, "I don't suppose you could let me have it for forty?"  And she said yes.

Here is my freezer illustration:  The same freezer that Steve looked at online the week before I did was a 16.7 cf Frigidaire at Best Buy.  It was $549.  When I found it online the following Saturday, it was on sale for $494.99.  I called the local Best Buy to find out if they deliver to my city and how much.  The fellow I talked to said yes, and that delivery was $29.99.  So I printed the online special and Steve and I set off for the store.

When we got there, we found the freezer, but the sign didn't say anything about the online price, so I showed the salesman my screen print and asked about it.  Sure- they'll match the price.  We went to go ring it up but he had trouble with their system taking the SKU.  So he calls over the system expert.  She has trouble, so she calls over the manager. She has trouble, so they try it in on a different terminal.  Still won't take.  She looks for another freezer in their system.  There aren't any in the warehouse, and there aren't any in any of the other Best Buys in the Pacific Northwest.  So this is where I just got lucky.

She tells me she can give me an open box price if I want to take the floor model.  So I say sure, because I remember only a couple of smudges on the inside of the freezer- those could be washed off later.  While she's working on ringing it up (they're still having trouble with this system, which was evidently only a couple of weeks old), Steve and I go back and pore over the freezer, just to make sure.  Everything looks good. 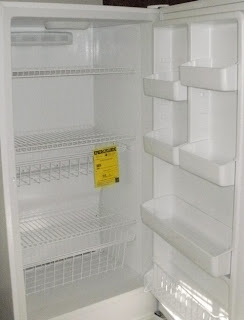 The inside of my new freezer
In the state of Oregon we have this organization called The Energy Trust. I guess they exist to get people to use less energy because they have all kinds of deals for buying Energy Star appliances.  They will also give you thirty bucks for having someone they approve of haul away your old fridge, in order to get it recycled properly.  Well, I didn't have an old freezer to recycle, but the new freezer qualified for a $50 check from them.  I filled out the online application, and sent them a copy of the receipt.  So I got the freezer for $425.

This freezer is pretty cool, too.  This freezer uses 615 kwh per year, so they estimate it'll cost $65 a year to run. Well, we all know that as energy prices rise, so will this, but at least it's way on the low end of energy use.  It has some pretty cool features, too.  The control for it is in the front of the door, rather than on the inside, so you don't have to open the door to change something.  It has an Extreme Freeze feature, to quickly freeze something down, a door ajar alarm, a control lockout to prevent someone from accidentally changing the temperature. It has a temperature alarm, to let you know if the interior is getting too warm, and a power failure indicator to let you know that happened if you didn't happen to be around when it did.  I think my favorite feature on this thing is the Sabbath mode, which disables all lights and other electrical activity , with the exception of the compressor of course, which continues to keep everything cold. This is cool to me, because no phantom load.  Of course, if you leave this on, then none of your other alarms or bells and whistles work.  But it's still cool to me.

So I think I did pretty good.

If you're not used to negotiating, just remember a few things.  Ask for a deal. The worst that could happen is that they say no.  Don't get outrageous about it- if you low ball, you'll risk insulting them, and that is the end of your negotiation.  Be pleasant through the whole thing, so they want to play too.  And remember that in a negotiation, try to come up with an offer where everybody wins. Know where your limit is, and don't go over it.  Also, be willing to settle, but start with more so you can give up only to the point where you want to stop.

And if there's only one thing you can remember, it's ask.
Posted by Paula at 8:49 PM

That's great advice, and something we've been learning as we do so much shopping for lumber, and tools, and bathroom vanities. One thing we've discovered is that if Home Depot is out of a certain product, they'll give you the next cheapest model or brand, with comparable features, for the lower price. We discovered this by accident while toilet shopping (we got two $239 toilets for $89 each) but have taken advantage of it a couple of times since then, saving us a few hundred dollars. They never volunteer this information - you have to know about the policy and not be afraid to ask, just as you advise!

I'm new to your blog and really enjoy it! A question...Who or what is Godot?

Hi Chris, and welcome aboard!

The title of my blog is a play on words of the title of the play 'Waiting for Godot', by Samuel Beckett. There are lots of different interpretations of the meaning of the play, ad nauseum, but essential what happens in the play is that the two characters, Vladimir and Estragon, have a long conversation while waiting for a guy named Godot, who never shows up.

I figure weeding for Godot, or anyone, is just as futile because the darn things keep coming back!

Paula -- I know you're right, but I just hate to ask. I hate it. I have friends who thrive on the art of negotiating a deal, but I always feel like a cheapskate. Although, if the shoe fits ...

By the way, I love your hair.

Love good idea #1,2, and 3! I have to agree that we've become a very disposable society and have forgotten how to be resourceful. I've always tried to practice the three "R"'s - reduce, re-use, recycle, but , even I have had my disposable moments.
The hubsters and I have to go freezer shopping very soon. I'm going to have to employ some of your tactics!
Your garden is looking great!!

I'm glad you mentioned this post because I had to come read it. Great deal! And some good tips as well. Most of us are so conditioned to pay the sticker price that we never dream of getting an item for any less.

Glad to know who Godot is.

And scrolling through your archives revealed very intriguing blog titles. I lament not having more time to read. :(

As we walk our guests through our new house, I love to point out all the things we bought on Craigslist and saved money. Sometimes when sellers price things way below their value, try offering them MORE when you reply to the ad. I remember the time I listed a car too low and had a lot of remorse after seeing the flood of responses. So when I saw 10 windows for $100 in the perfect size for our sun porch, I offered $120 and who do you think they called back?