Monday and Tuesday of this week were busy, but I didn't seem to get a lot done. Things just took a lot longer than I thought they would.  I did get the new trellis for the salad cucumbers made and installed. 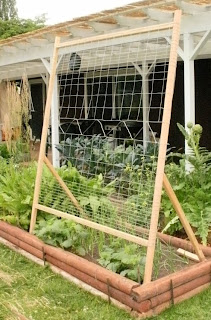 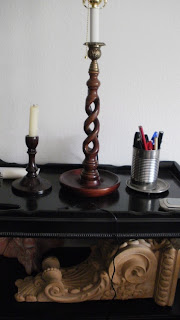 I also got the lamp built.  Back when Dave and Carl were here we hit a few second hand stores for fun, and one of the things for which I was looking was a lamp.  I didn't find one I liked, but I did find a great barley twist candle holder. Over this past weekend I bought the parts I needed, which was most of them.  The only thing I could salvage from the lamp we broke was the wiring.  Yesterday after getting the trellis done, I next tackled making the lamp.  I've rewired lots of lamps, in fact, I don't think there's a lamp in the house that I haven't rewired- all of them were purchased second hand.  But I've never made a lamp from something that wasn't already a lamp.  This one involved unscrewing the metal candle cup off the top and drilling a couple of holes for the wire, and then enlarging the hole on the top so that the threaded nipple could sit in it.  Then I basically strung and glued everything together.  The 'candle' is a piece of half-inch PVC pipe that I sanded clean.  I ordered this lamp shade in red from Pottery Barn this morning, which is kind of funny.  The candle holder cost $4.95; the lamp harp kit was $3.97; the nipples were $2.97; and the socket kit was  $4.47, so the lamp cost me $16.36, but the shade cost $49, plus $11 shipping, so sixty bucks.  But that is usually the case when building a lamp, or more in my case, refurbishing a lamp- the lamp and parts cost next to nothing and the shade always costs more.  I think that this will probably be the most expensive shade I've ever purchased, but I also think it will set off the lamp just so, i.e., I'll like it a lot.  Steve liked it too.  I'll show you what it looks like once I get it on the lamp.  I think I'll also have to change tables for it, because the shade is so darn big at seventeen inches across the bottom.  Good thing I already have just the right table for it. 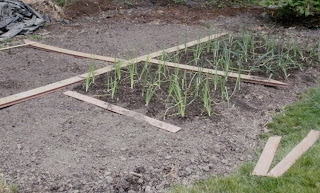 Other than that, the only other thing I got done this week was to plant some January King cabbage seeds and transplant some onions.  I have watering to do this morning, among other things, and I'll get out there just as soon as my work pants are dry.  It was so cold this morning (low fifties) that I didn't bother hanging the grubby load out- I need my pants sooner than that.

Then tonight I have a sewing class so that I can learn to use my new sewing machine.  Confession: I bought it last August, but haven't gotten around to learning how to use it.  It was the most like my old Singer that finally bit the dust after thirty years, but it's somewhat computerized, so I need to go learn its ropes.  Then, watch out. I like to sew, and there's a lot of it needed around here.

The rest of what I have are just pictures from around the place. Stuff is growing. 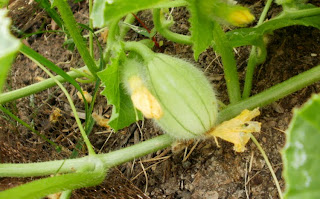 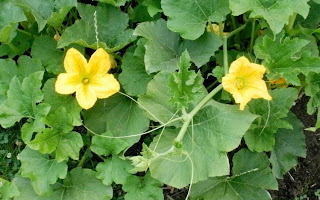 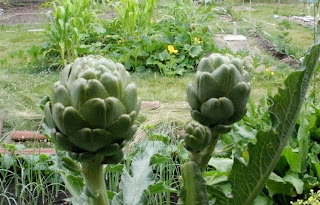 Dinner tonight (for me, anyway)- artichoke (Steve doesn't really care for them) 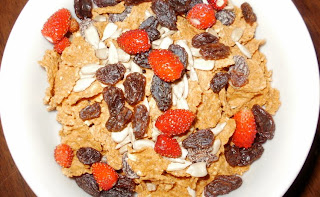 My breakfast this morning: raisin bran with added sunflower seeds and fresh alpine strawberries
Posted by Paula at 1:17 PM

I'm going to show Kim the picture of your trellis, so she can copy it exactly for next year's cucumbers. And way to go on the lamp - it already looks great!

I tried growing some melon this year - started them in the greenhouse, where they seemed happy, and then transplanted them out in June, when they promptly expired...

Cucurbits are tricky to transplant, I've read, but so far I've been having good luck with them. Mine went out in April, and then the next week I read that summer veg shouldn't go out until your night time temperatures are consistently in the fifties, so I covered them in bubble wrap with an apple wood teepee to hold the wrap off the transplants until they got bigger. Which worked like a charm. The only one that didn't get a bubble wrap blanket was the bed holding the honeydew, because I ran out of bubble wrap, so they are known to me as the Hapless Honeydew. They are not nearly as advanced as the other two melons, but they are holding their own and finally putting out flowers. I think I just really got lucky, but I learned a good lesson from it!

Nice trellis! And, I like the lamp so far, too! You're such a hard working gal...

Have fun with your sewing class. That, along with knitting and crocheting are amongst my not so talented areas! Although, I can piece a quilt on the machine. Go figure.

Me again - could you get in touch with me at mstanford@shaw.ca? I have something I'd like to send you.