Sometimes All A Guy Needs Is A Rib Dinner

Steve had a birthday recently, and he's usually hard to buy presents for.   He's the kind of guy who's happiest when eating something wonderful, and it only has to be wonderful to him.  While watching one of our favorites on on PBS, Primal Grill with Steven Raichlen, I had a flash of an idea for his birthday: rib barbecuing accessories!  I got the briquette baskets, rib rack, a package of drip pans and a bag of mesquite chips.  Dave and Carl got him a thermometer, which I later installed in the Weber.

The plan was to barbecue the ribs today, so last night while looking around for more rub recipes, I stumbled across AmazingRibs.com, which I spent quite a bit of time exploring.  Not only does Meathead have great information for ribs, but now I want to try his method for steaks and some of his other recipes, particularly the one for Grownup Mustard Sauce.   I'm partial to mustard-based barbecue sauce, and this one sounds really good.

So long story short- I made his Meathead's Memphis Dust, only changing it a little bit, and pretty much followed his barbecuing directions.  Instead of putting the pan and ribs in the middle with two baskets of coals on either side like Raichlen does, we did one pile of coals on one side, with the pan on the other and the ribs above it like Meathead suggested.  We used apple wood from the neighbor's prunings, which I saved for this purpose.  Raichlen says that he cooks ribs at 350 degrees and that if you cook ribs at too low a temperature, they can become mushy.  Meathead likes to cook his long and slow, somewhere between 225 and 250.  We put them in when the thermometer was still reading 500 and then shut the barbecue down almost all the way to slow the fire and lower the temperature.  It remained pretty hot for most of the time that we had the ribs in, so now we're thinking maybe it isn't so accurate.   I'll be honest- I thought the fire was so hot so long that the ribs were going to be tough and dried out.  They weren't. 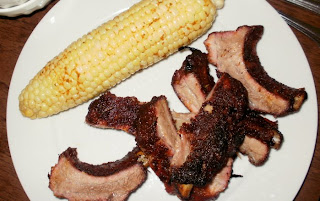 They were incredibly good.  Smoky, succulent, tender and yummy.  They stood on their own, which was a good thing because we didn't have any barbecue sauce and I didn't feel like making any.  But now that I've had them, I really want to try his other recipes.

Corn on the cob and a beet salad, made from beets from our garden, and a glass of Steve's beer rounded out the whole meal.  It was quite satisfying.  Quite.

Email ThisBlogThis!Share to TwitterShare to FacebookShare to Pinterest
Labels: Food, reviews and recommendations

I've never cooked ribs, and after reading your post I'm wondering why the heck not! It sounds like a great meal, and it makes me think we should be saving the apple wood from our prunings, too.

You should! Both save applewood and barbecue ribs. We did baby backs, and we decided that if we were going to go to all that trouble for one rack, we may as well do two. I think we both thought when we sat down that we'd each eat a whole rack by ourselves, but we didn't touch the second.

If you do save prunings, save the thickest end for the smoking- they last longer on the coals and you don't want to be messing about open the lid all the time.

Go to AmazingRibs.com- the guy really knows his stuff.

And I thought 'leftover ribs' was an oxymoron.

Did you exercise iron-willed self-control, or did you just overbuy?

Unfortunately, I have bunco tonight with the ladies, which means Steve's on his own for dinner. I might not get any of the second rack after all. *sigh*