Today I had a transesophageal echocardiogram done and I am still pooped.  It's probably an effect of the anesthesia, but even after a several hour nap this afternoon, I am still really tired.  Fortunately for me, being a couch potato for the rest of the day was doctor's orders.

Steve, on the other hand, was a good, busy boy.  While I was down for the count in the hospital, he used some of the time to run over to F.H. Steinbarts for brew supplies.  We stopped at Pine State Biscuits for breakfast (which was at noon, actually) and then we came home.  And while I was sleeping off the rest of the drugs, he was being a helpful boy and brewing up another batch of pilsner.  Buying the second fermenter was a really good idea, because he's able to brew twice as much pilsner this winter than he was last winter. 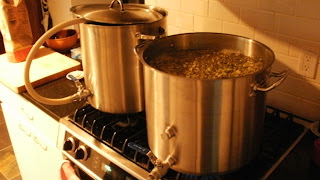 So I'm going to go catch the rest of the nightly BBC news with Mike Embly and hope that I don't fall asleep.

Tomorrow we're going to go check out the Winter Farmers Market in Corvallis and meet up with a buddy of Steve's.  You guys have a good weekend.
Posted by Paula at 6:24 PM

Email ThisBlogThis!Share to TwitterShare to FacebookShare to Pinterest
Labels: Homesteading Arts, life - as I deal with it

I think you should interpret your doctor's orders liberally and take it easy for the rest of the weekend!

And once you are feeling well enough, tuck into that homebrew! Yum.

I'm glad you listened to the doctor and did as instructed. I hope you're feeling better, and the the test is only routine.

Reading about Steve's beer making is really interesting, and it combines both science and the potential for inebriation, which I like. Enjoy your day at the farmer's market.