For JAGG: How To Grill A Steak

A reader asked me what my secret to grilling a steak to perfection is.  I'm not sure that it's a single secret, but here's how I do it:

Start with a good cut.  Our favorite is a NY strip, but T-Bones and ribs do well.  So far with our quarter grass-fed steer, they've all been great.

Leave your meat out on the counter for fifteen minutes to a half hour before grilling, so the whole thing is room temperature. I usually don't have a problem with this because it's been defrosting for better part of the day.

If you can, start seasoning your steak a couple of days ahead by salting both sides, and then wrapping it back up.  The salt first leaches a little juice out of the meat (which looks like blood, but are really proteins) and then the steak starts drawing the juice back into the center, which seasons deep within the meat.  If you can't do that, no big deal, but salt it at least fifteen minutes before it goes on the grill.  You can pepper it later at the table.

Use real charcoal, not briquets (and not gas, if you can help it). Real charcoal gives the best flavor.  We actually buy charcoal for steaks and burgers, which you grill, but briquets for slow stuff, like pulled pork shoulder and ribs, which are barbecued low and slow.

Wait until the coals are ready.  There should be no flame, and the coals should be glowing.

Clean and oil your grill grate, and then the steak goes on directly over the coals.  Don't touch it for at least 7 or 8 minutes.  If you want to give it a quarter turn at four minutes to give it fancy grill marks, that's okay, but don't turn it over!  Also, if the steak has a large hunk of fat along one side, you can place that fatty edge  along the edge of the coals to help minimize flare-ups.  At least, that's what I do.

After 7 or 8 minutes, turn the steaks over to a new space on the grill, but still over the coals.  Now watch for little beads of blood to pop up through the top of the steak.  Once that happens, you can test the steaks' doneness against your hand.

Hold your opposite hand open comfortably- not too closed, and not all the way open.

If the steak's firmness feels like the fleshy of the base of your thumb here, it's rare. 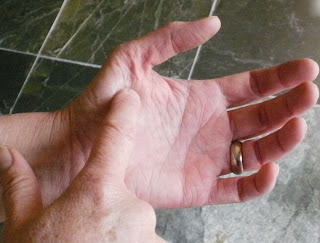 If the steak's firmness feels like the middle of your palm with your hand loosely open as for rare, then it's medium. 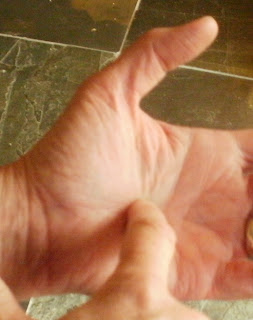 If the steak's firmness feels like the middle of your palm with your hand all the way open and your fingers flat, then it's well done.

Steaks with a bone in them like a T-Bone should be left on a little longer because they take longer to cook.

When they're done, pull the steaks off the grill and let them rest at least five minutes before cutting in.  That's usually when I holler to Steve to come pour his beer because it will take him at least five minutes to take his sweet time coming out from the back of the house, amble down the hallway into the kitchen, grab a beer glass and a beer, and pour his beer and sit down.
Posted by Paula at 11:30 AM

Email ThisBlogThis!Share to TwitterShare to FacebookShare to Pinterest
Labels: Food

I've never tried salting that far in advance, I'm more of a rub-it-on-it's-way-to-the-grill kind of guy. It's neat that it draws the juices back in, I'll definitely give it a shot. Christy and I just had some delicious NY Strip cooked hot and quick in a cast iron pan on the wood stove. 2 minutes a side, tops. Simple, wonderful and juicy. So juicy. Why'd you have to start talking about steak.....

I know...but JAGG asked. I learned the salt in advance trick from a chef. I also learned from him that the way that salt works to make things taste better (as in baking sweets- something that you want to taste better but not necessarily salty) is that it opens certain receptors on the tongue.

The cool thing about cooking a steak in a pan is that then you have fond to deglaze for a pan sauce....

Hey, where do you get your grass fed beef?

From Carman Ranch which is in Wallowa, Oregon.

Now that's a long ways away...do they deliver to the Portland area or do you take a nice little vacation and pick up?

Yeah, it is. They deliver to a central place in Portland. Actually, it was Grand Central Bakery on North Fremont. It was kind of a zoo that day because a CSA farm was delivering CSA boxes at the same time!

I've used this method for ages! There is also the face method - chin, cheek, cheekbone.

We've pretty much gave up salt because of hubster HPB. I will still add some after cooking to beef and lamb just for myself...

Wow...I'm so glad I asked. I have learned a lot and can't wait to give it a try. Thanks so much for all the details. YUMMMMMM.....