I've reached the point in Fisker's Early Retirement Extreme where he writes about replacing outsourcing ordinary life skills with the gradual insourcing of these skills.  For instance, instead of going and paying someone sixty dollars to cut your hair (the price of my last haircut), instead learning to do it yourself.  I used to cut my own hair, on the premise that I can screw it up for free, but then got out of the habit because frankly, it's hard to cut your own hair when you don't have a three-way mirror.  So I've been letting it grow, under the theory that eventually I'll find somebody whose work I like, and I should give them something with which to work.

I've also been blowing it dry while hanging upside down, trying to, you know, make it look like I have more than I have.  But lately, it's getting to the point that when I do this, I wind up looking like a White Crested Polish, you know- like this: 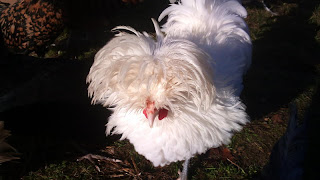 So tonight I broke down and cut my own bangs.  I won't say that it was a great success because I still have the same face beneath that hair, but at least it didn't cost me anything.

Cut your own hair, and the worst-case scenario is a hat for a while. My huband cuts mine, and I only look like the chicken when we let it go too long.

Lol. Thanks for the laugh this morning! Love the chicken picture. I get LJ to cut my hair. He wants it to stay long, and I talk him into cutting it for me by threatening to have a hairdresser cut it all off. :) Definitely less expensive to cut your own if you can.

Spurred on by Tamar' success with her own insourcing of haircutting skills (and my resentment at paying £45 to have it done at the salon), I've cut my own hair the last two times. It helps that I haven't got a style to speak of, and once it's in a ponytail, you can't tell that if ends are uneven.

I cut Mike's hair as well, though he wasn't as impressed with my styling skills. Thankfully I can knit, and he's got a selection of hats to choose from until it grows out. I think it looks fine and I tell that it's me that has to look at him, so suck it up.

Even if I cut my hair twice myself, and pay for a tidy up the third time, that saves quite a bit.

Looking at the Polish crested....I think that was done with a Flowbee.

Tamar and Rae- I would seriously love to entrust my haircuts to Steve, but he's the kind of kind who does a less than half-assed job at something if it's something he doesn't want to do. I've been calling him Half-assed Garner for a long time now. So I'm kind of stuck with it myself. Never mind that I've been cutting his hair and doing a darn good job of it since we got married...he'd still find a way to fix me good.

Jennifer- I think you are right about that Flowbee.