Getting Back Into The Homesteading Groove 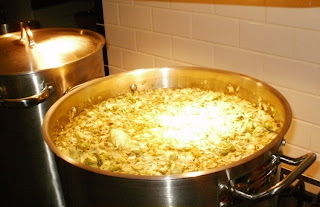 Today is a brew day for Steve, so we headed into Portland so that he could get his supplies.  This batch will be a Vienna lager, which is sort of like a Mexican amber, but lighter in color. I hope that it has roughly the same flavor profile as the Mexican he made, which was really good.  We tasted the Alt on Friday- I think it might be a little over-hopped, but we'll see what a few more weeks in the bottle will do for it.  Since we got up late, we were much later to F. H. Steinbart's in Portland (one of our Portland meccas) than usual. I went in with Steve, and it was so full of furry men, that I told Steve this place is haired over, to use a Jenni-ism, which means it's too crowded, but in this case it was fairly literal, what with all the facial hair and all, so I went to go wait for him in the car.  While I was waiting, I watched the tall, burly macho man in the canvas work kilt that I espied in the store came out with his cohort and walk across the street with his brewables.  Picture, if you will, a tall burly man in heavy steel-toed work boots, gray knee socks (it was thirty-six out, after all), a beige canvas work kilt, heavy jacket, U. of O. scarf, and snap-brim hat.  He opened the back of his Subaru, chucked the bag of brew supplies into the back, walked around to the driver's side of the car, opened it, and then tucked his skirt under his derriere and sat down on the edge of the seat, backed in and swung his knees around to the front like a prim little school girl.  I couldn't help myself- I covered my face laughing and said into my hands, "this is just not working for me."  For some reason, the dichotomy of a guy machismo enough to wear a skirt that's obviously seen some time on the job and heavy work boots, and then him getting into a car in the most lady-like way imaginable was good for a giggle.  You don't see this kind of thing everyday.  Well, maybe you do in Portland, but I'm not in Portland every day.
As part of my goal to reduce our natural gas and electricity use by twenty-five percent, which I'm frankly not real sure we can do, since we are already on the low side, I've gone back to heating my washing up water on the wood stove, and have hit on the ideal method for eking out the hot water.  The idea is to use the heat that we have coming off the stove, and not force the water heater to cycle back on.  I've found that starting my wash water in my dish pan cold and then adding hot water from the big pot off the wood stove is a better way to regulate the water temp and not waste so much of it.  So far, it's working.  And since today is a brew day, Steve is heating as much of the water for the beer as he can on the wood stove as well.  Brewing takes a lot of energy.  Unfortunately, the mash tun won't fit on the wood stove- it's too wide for it- and this is unfortunate because it has the most volume and takes the most gas to get to temperature.  But starting the others on the wood stove is better than doing the whole thing on the gas stove, or worse yet, on an electric stove, so we do what we can. 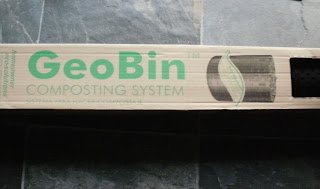 My purchase in Portland was at the Urban Farm Store (another mecca) to get a Presto GeoBin composting system.   The Presto system was rated the best out of nine in a comparison test run by the UC California Cooperative Extension.  I mentioned in an earlier post that I really struggle with compost.  I can't get the temperature up where I need it and it seems to take forever to get a batch of compost made.  I'm going to try this method and see if it works better, and I'll report back.  I could probably stand to have a compost thermometer, but they're expensive, so it will have to wait. Interestingly, the compared system was the Presto Hoop Companion, which I gather is their earlier model.  The GeoBin received very mixed reviews on Amazon, but folks have found that the bins also make great growing bins for things like potatoes.  So even if it doesn't work for composting, I can use it elsewhere in the garden.  It better work though- it was forty bucks!  Like I said, I'll report back on it. 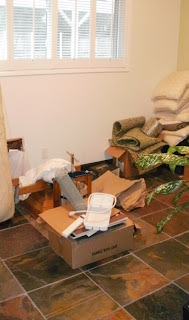 And finally, I'm happy to report that by doing a little every day, I'm making real progress on the Room of Pending Stuff (see pic).  It still has a lot of stuff in it that needs sorting, but you can actually see most of the floor now, so I feel a whole lot better about it.  Thanks to all for your continued support.
Posted by Paula at 4:20 PM

It looks like Paula's groove is finding its way home!

My big problem with compost is we have so darn much of it because of all our perennial beds. I created a 20 foot long caterpillar, about 3 feet wide and 2 feet high, with all the debris from the summer and fall. Jeez Louise! How long will THAT take to turn into compost?! I'm going to get great arm muscles from all that pitchfork turning-over work.

(BTW, that's a great looking floor in your Room of Pending Stuff!)

Miriam- sounds like you could use a little tractor to help you with that- that's what the big outfits use. (And thank you, ma'am!)

We, too, try to make maximum use out of our wood stove, but found that there are limits. We make sea salt on the top of ours, using a big enameled cast-iron pan that covers maybe a third of the top's surface. When we tried to double production, though, it sucked up too much of the heat and our house didn't get warm. We went back to the one pan.

I've always wanted to try cooking things inside the stove itself -- even if it's just potatoes wrapped in foil -- but I'm inexplicably leery of putting food in there.

As an aside, I should mention that the chickens you're going to get will love the spent grain from the mash tun.

That IS a great looking floor! Good on ya'! Little by little and you'll be done before you know it!

I find the less attention I pay to my compost the better it does. This makes me happy because it's one less thing for me to worry about!

Tamar- I've been thinking of trying a pizza in ours, 'cause I think I'd have the room, but also think the logistics would be a serious pain. I didn't think of foil-wrapped 'taters- that's a great idea. I'll try it sometime and report back.

Thank you, Toni. You are probably right about leaving it alone, except that I need a lot of compost quick! I have the nastiest, heaviest, stickiest clay soil, and need to amend it with compost. Which I'm hoping will be much easier to get done quickly with the new composter and the addition of clucky friends.