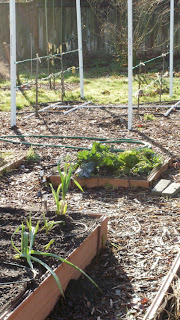 It was so pretty this morning I had to take a picture.  You can see my espaliers in the background, and the fluffy green stuff in the midground are January King and Melissa cabbages, and then the transplanted leeks.

We put away the last of the blended soil today, and had just enough for the large boxes.  The smaller boxes, like the one with the winter cabbages, will have to wait until I get in soil for the potato barrels, which I'm going to have to do.

I discovered French sorrel growing under its on volition in the hoop-de-don't today.  It was generating from roots that I'd inadvertently left in the bed.  I dug them out as best I could, and plucked the one growing in the compost pile as well.  I have a feeling that I'm going to be very sorry about growing French sorrel.  It made nice soup but it wasn't all that good.

However, it did survive the heat of summer, even when I didn't water it, so maybe someday it'll be the weed that saves us.
Posted by Paula at 11:04 PM

Email ThisBlogThis!Share to TwitterShare to FacebookShare to Pinterest
Labels: It's a Gift

I plan to sow January King cabbage seeds this year and plant them on my new allotment. Are they easy to grow?

Yes, they are- very easy. Mine are tiny because I started them so late, but I'm expecting Homegrown Harvest to help me with my timing this year.

Good morning! Saturday was gorgeous, wasn't it? I fully expected it to be the same on Sunday and was more than a little disappointed!
You've mentioned a few times that you're getting chickens this spring (or did you say this year?) and I was wondering how your preparations for that are coming along?
Have you decided on your breed(s) yet?

My prep for chickens is to do a lot of thinking about it, and take steps to get the beehive built first. The bees are on order and paid for, and I need to have a hive ready for when they get here, which is April, I think. I want to have it built much earlier than that because they might come earlier, but mostly because every time I mention chickens, Steve has a cow because the bees are on order. So I'm learning not to think out loud.

But I am thinking about them. I have a lot of leftover materials lying around the yard and leaning against stuff in the garage. I also have quite the stash of apple prunings from my neighbor last year, plus it's almost apple pruning time for him again. Plus, I have a lot of clay. And I have a lot of slate leftover from when we had the floors redone. So I'm considering making the coop out of wattle and daub with a slate roof, and have ordered a book on wattle and daub from Amazon, so that I can further research it. If I do it, I'll document it of course, but I still have to commit myself.

As far as breeds go, no, I haven't decided. I also haven't decided on where I'm going to get said chicks, but I'm trying to talk some neighbors into ordering with me. So far, nobody's biting.

But yeah- this spring. Chickens.