Yesterday was forecast for rain, but we had a fair amount of sun so Steve gave me a hand and we finally got the citrus put to bed in their new pots. 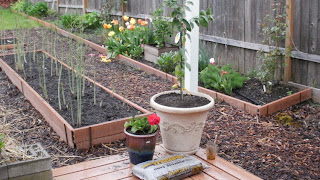 Now we have a Lisbon lemon on one end of the deck and a Bearss lime on the other end.  Last night's dinner included asparagus from the bed you see just beyond there and salad (which included chive blossoms from the herb bed and Moroccan mint from the deck- dressed in grape seed oil, wine vinegar and salt and pepper- it was divine!) 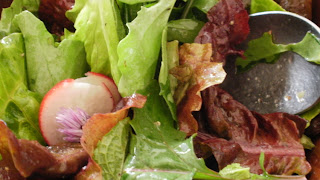 from this bed here. 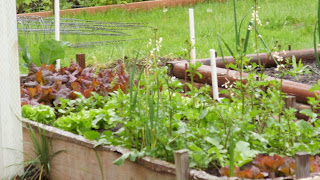 I also got some of the spuds planted in home made grow bags, and since today is rainy I'll work on sewing more of them.  I only planted the chitted seed potatoes that had the most vigorous sprouts on them, but it will soon be time to plant the rest of the potatoes, so I need a lot more bags. 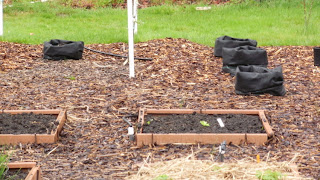 The spuds were planted in compost from the garden, and as they grow, I'll hill them up with chopped straw and cover them with the edges of the bag.  I've never done this before, so I don't know how well they will do or how this will turn out.  And here are the other two beds that are doing fairly well in the garden. 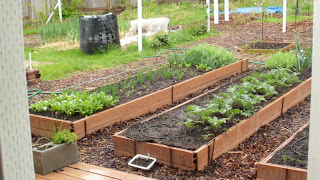 The bed closer has Red Russian kale in it, which is ready; we've been eating it in our favorite pasta dish for a little while now.  There are a few leeks from last year at the end, and Maestro peas next to the leeks.  The far bed has sprouting radish greens in the close end, then little tiny celery plants on this side of the shallots, which are the spikey plants, carrots on the other, and at the far end of the bed are the Serge peas.  The peas have me a bit concerned because they still haven't produced flowers, much less peas, and seem to be growing very, very slowly.  They are sitting where I want to plant the summer squash for this year, and I'll need to get seed for them sown soon.
I'm not so sure about this year's garden.  Last year I started seeds mid-February and some things seemed to take forever to finally start bearing (like the tomatoes).  So I figured that I started too soon last year and decided to wait a little to start this year.  Now I'm wondering if I've waited too long.  The peas went in and I had to worry about them rotting.  It's all topsy turvy, and I don't really know what to expect.  I will say that maybe it's a good thing that I'm trying to learn how to do this at the beginning of the thirty-year cool spell that the Pacific Decadal Oscillation is auguring in.  I think it's better to learn it now, while I'm still really learning, than having to re-train myself after years of knowing what I was doing.
At least, that's what I'm telling myself.
Posted by Paula at 9:25 AM

I'm so glad you showed pictures of your garden. What are the potatoe grow bags made of? Are they plastic garbage bags or some kind of fabric?

Hi Paula, have you startedthe Homesteading book yet? I'm interested in how you like it. I've thought about buying it but would like to know what you think about it...before I spend my money... Have a super week...

They're made of weed stop fabric Rachel. I posted more about them tonight.

I have Dawn, and finished it. Honestly, I was a little disappointed, although I still think it's a good book. I've been waiting for a copy of the original to become available so that I could make a good comparison of the second edition (which is what this is under a different name) to the first.

Don't spend your money yet. If you can borrow it, do, but I promise I'll review it. I want to do it justice, and not just be critical because it's still a good book. I just think there were areas they could have improved but didn't. However, she still covers a lot of ground that other homesteading books don't, so in my view it's still a good book.

Thanks Toni. I think it looks bare. I seem to remember having a lot more under cultivation this time last year. Honestly, I'm a little worried, but I hope I can fix it.