Things have been pretty quiet on the homesteading front lately, which is primarily due to the weather being strangely cold and dry for these parts right in the middle of the rainy season, and my working an average of fifty-plus hours every week, which doesn't include the commute. It's cold and dark when I leave in the morning and cold and dark when I get home, and I'm pretty wiped out by then anyway, so not a whole lot is getting done around the homestead. I have been working on the dining nook on and off, and have the back panels done. I probably won't pick that up again until after the holidays. 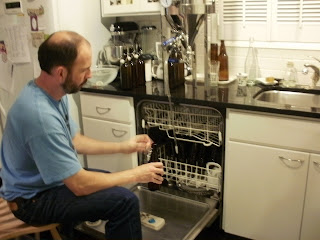 Tonight Steve bottled the Apfelwein he brewed four weeks ago using Ed Wort's Apfelwein recipe.  We bought six gallons of Tree Top apple juice cheaply at Costco just for the purpose of brewing them into a potent potable. The wine should be ready in about three weeks, maybe a little longer with these cold temperatures. I'll let you know how that goes.

In other news, this month's electrical bill showed that we used 6.3 therms in December of 2011, partly because we're not using the dryer, and partly because the solar panels have been producing more energy than we anticipated for this time of year because of all the sunny days we've been having.  I should say we used only 6.3 therms, because last year we used 12.7 therms, so this December's use was slightly less than half of last December's use.  Pretty good.