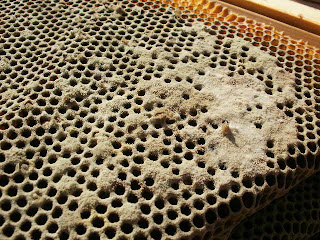 It was obviously a very bad design on my part.  From the appearance of the top bars, it looked as though bad ventilation was the culprit. I learned a lot from the video seen here on top bar hives and being a bee guardian, even though it's merely an excerpt of their full length DVD (which I am going to buy).  Last year, I fretted every time I got into the hive because try as I might, I could not avoid crushing bees. It was also really hard to get into the hive; I had it up on a high stand in case of skunks, who are notorious bee eaters and who have also been known to traverse the yard.  This necessitated climbing up on a step ladder, which made getting into the hive a little precarious, which only added to my stress levels.

This year will be different:  I put a solid bottom in the new hive, with a large entrance at the bottom, and a very large landing board.  I plan on feeding them on the landing board, which I've seen done in videos with conventional Langstroth hives.  It also looked like they did that in the Backyardhives.com video. 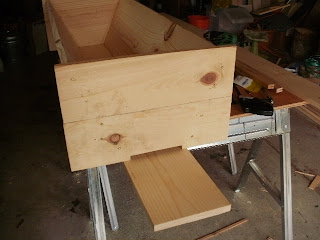 I'm also putting in a window, so I can see what's going on in the hive without opening it up. I got really lucky in this department because I had leftover plexiglass from making chicken coop windows, and I found some channeled wood from a previous owner in the garage, which I used for the frame.  I'll still need to get into the hive to check on the queen periodically, but I'll be able to see the bees' progress without disturbing them.  The new hive body is nearly done- I just need to cut some ventilation in the sides near the top.  I also plan on coating both the inside and the outside with melted beeswax- the outside will have some raw linseed oil or salad oil mixed in it. 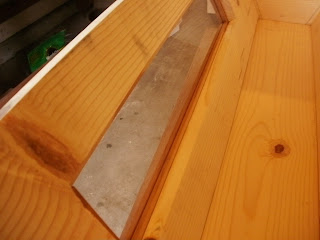 Next weekend I make the top bars and affix the last corrugated panel I have to the roof of the old hive, which I'm reusing.  Then the hive can go on some stacked up concrete pavers in the back yard where I can keep the girls a little cooler during the summer and I'll keep it low enough that I can check it out sitting down.

It's too bad that the first colony had to die to teach me all this. Hopefully, this year things will be different and they'll do a LOT better.
Posted by Paula at 8:39 PM 5 comments:

This is an open letter of thanks to Lloyd Kahn for writing and publishing the book Tiny Homes Simple Shelter: Scaling Back in the 21st Century:

I recently purchased your very fine book Tiny Homes and want to thank you from the bottom of my heart for it because it has changed my life.  That obviously sounds unbelievable but let me explain. I, like lots of people, have always wanted to live in the country, but gave up hope of ever doing that when I married my confirmed city-boy husband.  Four years ago we moved to a quarter-acre suburban lot as a compromise between living in the city for him, and living in the country for me.  In that four years, I built a garden and a chicken coop and learned to can; he had our asphalt roof replaced this summer with a metal roof so that we can harvest rainwater from it, and had a 4.5Kw solar PV system and a solar water heater installed. He also taught himself to brew beer.  I was surprised but still didn't have a lot of hope when he mentioned during our trip south to the Bay Area for Christmas that the only way we could move to the country is if we won the lottery and could do it right.  Well, that's just great, I thought; all we have to do is win the lottery, which isn't going to happen. The change here is that instead of saying absolutely no way to country living, he was at least considering how it could be done.  And that he was amenable to it it, to a degree.

Then about two weeks ago I bought Tiny Homes.  I enjoyed it immensely, and left it in my favorite reading spot.  I asked Steve to take a look at it because it has some really clever solutions in it, plus it's just a really enjoyable book. He did look at it, over the course of the last two weeks. We've both been picking it up and thumbing through it. Then I started saying things, like, if we did this then we could do this, and he'd think about that. Then I noticed that he was engaging in this conversation, and not closing up to it.  I think it was the stories on the cob houses that did it, partly because they are hobbity, and that would appeal to him anyway, and partly because they are so incredibly cheap to build, but eventually I pointed out that he seemed to be thinking about this, and was he thinking maybe we could move to the country.  I asked him what his thinking was, and he thinks that after buying a property and building a house on it for cash, that it would be a good thing to provide our own water, our own power, and our own heat, and most of our calories with a garden.  The short of it is this: we are now planning a move to the country, and I couldn't be more stoked about it.  We want to pay off the mortgage on this place first, which we figure we can do in a couple of years, and we still have educate ourselves on buying a piece of land, and we still need to figure out where we're going to go, but we have a new goal in mind and are pursuing it.  This changes everything; there are projects that I have planned for this place that won't take place now, because I don't need to spend the time and money on them (or energy).  It also means that because we're planning a much smaller house, I need to start getting rid of a lot of possessions, and I'm totally okay with this. We have a lot of driving around to do, and a lot of thinking and a lot of planning.  But we are going to do it, and I have only you to thank for this change.   That's how good your book was, and I am sincerely grateful that you took two years of your life to put it together, because in two short weeks it's changed mine.

Where I couldn't convince him that this was possible, you did with your book, and I will be forever grateful for that.
Posted by Paula at 10:27 AM 8 comments:

Email ThisBlogThis!Share to TwitterShare to FacebookShare to Pinterest
Labels: frugal living, Homesteading Update, life - as I deal with it, Self-sufficiency

This past weekend I made about five gallons of laundry detergent for less than four bucks.  I got the  recipe from the Urban Farming Guys at the site here. She uses one cup of detergent per load; my HE washer, combined with the naturally soft water we have coming out of the taps, uses only a couple of tablespoons of regular detergent per load.  So I didn't mix it with another five gallons of water and had an interesting surprise.

It gelled enough that I had to force it through my spider to get it broken up enough to bottle it. But it stayed liquid so I'm satisfied with it.  I think I will have use more than a couple of tablespoons, though, even with the HE washer and soft water.  But, you can't beat the price.  I think the last time we bought that enormous bottle of detergent from Costco we paid about fifteen dollars for it.

Here's the recipe, if you prefer to work that way:


Grate the bar of Fels Naptha soap into the old saucepan and add around a quart of water.

Heat on medium low heat until it's melted.  Pour into a 5-gallon bucket.

Add the half cup of washing soda and cup of borax and stir until they are dissolved.

Fill the bucket with hot water and stir to mix.  Cover and leave overnight.

The next day, stir the soap to break up the globs.

Add enough hot water to both and stir to mix.  Bottle it up.

So there you have it- really cheap liquid laundry soap.  Would I do it again?

Probably.  I have five more bars of Fels Naptha soap in the cupboard.

Email ThisBlogThis!Share to TwitterShare to FacebookShare to Pinterest
Labels: frugal living, getting ready, Homesteading Arts, how to

On one of the blogs I follow, the writer lamented her inexperience with making cushion covers with zippers.  For some reason, and I don't know why, I can't post comments to a lot of the blogs I follow- it's very hit and miss (does anyone else have that problem?), so I thought I'd give her advice here, in case it's helpful to anyone else.

I'm a long time cushion maker.  I made the cushion for this bench, from tracing out the shape on an opened paper grocery bag (which I still have, case I need to make one again), to cutting out the foam in the shape of the bench deck, to wrapping the foam in poly quilt filler, to sewing the whole thing up. 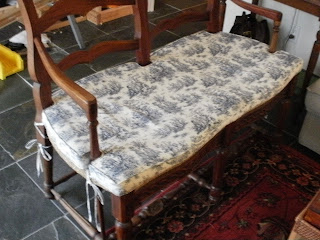 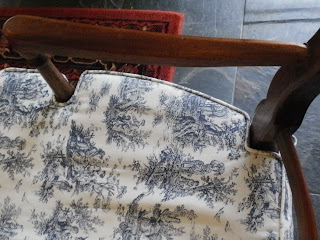 The advice that I would give Julia, is that when you're making a zippered cushion, sew the zipper in first, just like you would put a zipper in a garment piece.  Then pin the sides together with the zipper closed and stitch those seams.  Then unzip the zipper and finish the rest of your seams. Once all the seams are sewn together, pull the cover right side out through the open zipper, and voila! 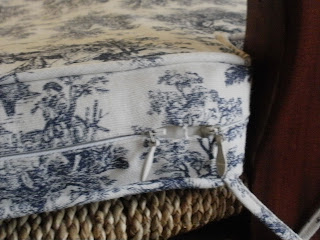 For this cushion, I used two invisible zippers, but I needed them to run along the entire back of the cushion for ease of stuffing.  They didn't quite make it, so I left the gap, which I tacked closed once I got the cover on the cushion.  You only see it if you're looking really closely at it; otherwise it disappears. 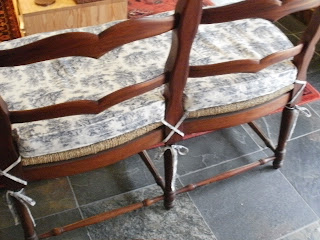 I hope this information helps anyone out there thinking about making their own cushions - it's really not that hard.