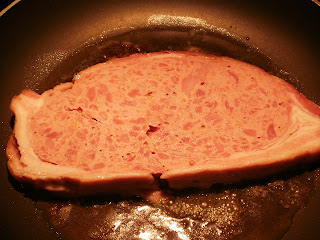 This is a Schweinebauch (shwy-nuh-boughk) from Edelweiss Deli in Portland.  It's essentially a big sausage stuffed in a pork belly that's been split to make a pocket. 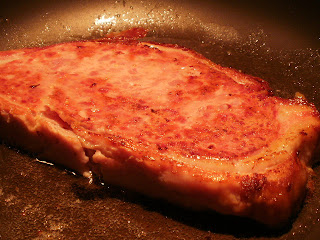 We always ask them to cut one slice three quarters of an inch thick, which we take home and fry up! 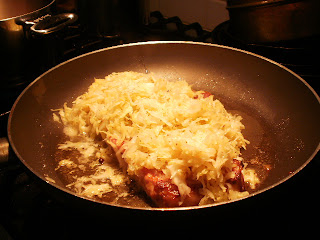 Once the one side was nice and brown, I threw the sauerkraut on top and put a lid on it to heat up the kraut while the other side was browning.

It sure was good with the beer!
Posted by Paula at 9:24 PM 3 comments:

Work takes up most of my time, and is promising to take up more, but what do you do? 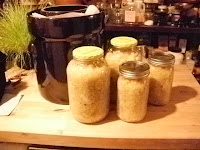 Finish the sauerkraut and put it (raw) in the fridge.  This should last until next fall when it will be cool enough to ferment some more sauerkraut.  This turned out so much better than last year's that I have to attribute it to the cooler weather.  Well, maybe the Fermentation King had something to do with its success. 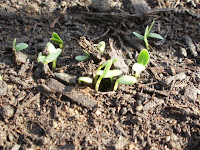 You also get the cucumber and green bean seeds into the ground.  The cukes are up; I expect the beans to be up over the weekend because they are just starting to break the soil surface.


The corn went in and it has still to come up. 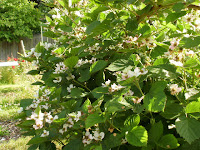 This year I expect to have a bumper crop of boysenberries.  I'm not sure if this picture conveys how incredibly covered with flowers and berries, and flower buds coming up still.


This weekend is going to be partly cloudy and warm, so perfect for spending the whole weekend in the garden.  And I have lots of stuff to get into the ground.  However, the Gardening by the Moon section of the Farmer's Almanac says that the fourteenth and fifteenth are barren days, but that the sixteenth and seventeenth are good days for planting root crops, which is just fine, since it's time for planting winter stuff.  Need to get carrots and more parsnips in.  It's also good for getting transplants in, which is also good because it's high time to get the tomatoes moved.  I'm not willing to turn over the peppers and eggplants yet, because of the slugs, but soon. 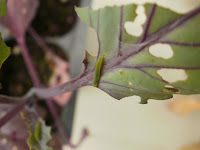 The kale and cabbages I carefully seeded were pretty well massacred by cabbage worms while we were in Puyallup, so I'll try putting them in but I don't have a lot of hope for kale or cabbage this summer. But I'll work at getting winter coles in later, like on the twentieth and twenty-first.  I don't even  know if that's a weekend or not, but it's the right time for any above ground crops.

In the meantime, I'm praying for Syrian patriots.
Posted by Paula at 10:45 PM 3 comments:

Back From the Mother Earth News Fair, Part 2

More from the MEN Fair from this weekend:  I saw Ed Begley Jr., in person- he looks like someone's history professor.  I also managed to find Lloyd Kahn, tell him my story of his book's influence on our future plans, and thank him for it.  He looked genuinely pleased.

The above is a slide from the micro-hydro talk, which was not this hands-on, but still very informative and we learned a lot.  When we sat down for this one, Steve said, "which one's this one?", and I said, "microhydro," and he said, "oh cool," which surprised me, actually.  I like microhydro because if you get the right setting it can be a constant source of electricity, rather than just when the sun shines, or just when the wind blows, and it's way less expensive than either.  It's one of the reasons I want to find a property with running water on it, preferably with a drop. 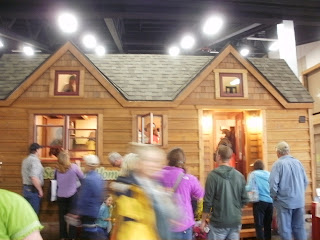 This is one of those Tiny Houses you read about. It was quite nice inside.  It was also $60,000. No kidding.

An example of my beloved wattle and daub.  I will probably make my barn out of this someday.  I just really want to build something with it. 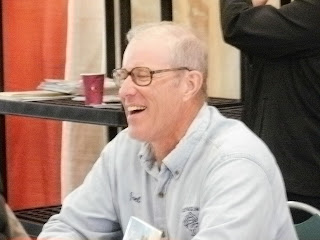 If this looks like Joel Salatin, it's because it is.  I did not sit in on any of the big name (Joel Salatin, Temple Grandin, Ed Begley Jr, Paul Stamets to name a few) talks because I'm already part of the choir and I had other more important stuff to sit in on. 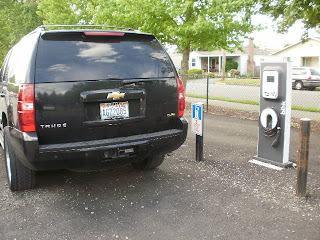 And of course, even though this was a fair for sustainable culture, there has to be at least one moron that doesn't get it.  This guy parked his whoop-de-do flex fuel SUV right in front of the electric vehicle charging station.  The sign even says what that space is for.

What did I sit in on?  Learn to Make Tofu and Tempeh (which I wanted to see for the soy milk making- this I think I could have picked up with a Google search), Choosing Organic Fertilizers and Building Soil Fertility (not much I didn't already know, unfortunately), Home Cheese-making: Alpine pressed cheeses (this guy, unfortunately put several of us to sleep- I actually dropped my pen- but his subject was interesting and we still want to try making cheese some day), Straw Bale Construction for the Pacific Northwest (the jury is in- yes, you can build with straw bale in the PNW and property variables notwithstanding, this is probably the medium in which we'll build), Bokashi Composting (learned a ton here but want to do some experimenting with it, like using spent malted grain instead of making the bran for it), If I Knew Then What I Know Now About Microhydro (Scott Davis is an old hippie who's very knowledgeable and very funny and we learned a lot from him- when the time comes  we'll probably buy his book but in the meantime I need to look for Microhydro: Clean Power From Water at the library).  Then Steve and I split up- he went and sat in on Straw Bales Homes in the Northwest: Myths and Rumors, to compare and contrast to the one we saw together previously and he learned more and took notes, so that was good.  I sat in on Planting for Year-Round Harvests on the Pacific Northwest Coast- now this was interesting on a couple of points: one was that this was the most attended talk that I attended- standing room only and people sitting on the floor in the aisles.  The second interesting thing was that she explained several key points about growing food for the winter that gave you a ha! moments and made tons of sense: you need to plant in time for your plants to come to maturity in October, because they aren't going to grow anymore than that (provided of course that you live in the Northern Hemisphere). It's all based on day length and light.  And because they aren't going to grow anymore, if they wind up in an area of your yard that doesn't get sun in the winter, so what? As long as they get sun during the growing season, they'll be okay.  And since you're planning for fall and winter harvests, and because they don't grow anymore, you have to plant five times as much as you would for summer eating.  She just made so much sense, and listed great varieties for winter hardiness that I am going to get her book Backyard Bounty, by Linda Gilkeson, Ph.D.  Then the last thing we sat in on was Biochar, which was another one of those subjects that I've already researched a lot and know to be really useful, but still learned a lot from the talk.  Learned about a little stove that I have to find online and then I'll bring that to you as well.

All in all I've lots to digest, and we will attend more of these if we're able.  You should too, if any of this interests you.  The next one this year will be over three days in early fall: September 21-23 in Seven Springs, Pennsylvania.

The Mother Earth News Fair did not disappoint!  Far from it: it was better than Cats. I'd see it again and again.
Posted by Paula at 10:49 PM 8 comments:

Back From the Mother Earth News Fair, Part 1

Steve and I are back from the MEN (Mother Earth News) Fair in Puyallup (Pew-all-up), Washington.  Wow! What a great use of time and money- we learned tons!  I took a bunch of notes and I'll relate a bunch of stuff over the next several posts- some things I want to either try myself before I report (making soy milk) or do more investigating (bokashi composting) before I report anything to you.  We both feel this was really well worth attending and are thinking about next year's fair, provided it's in as easy and close a location as this year's, which was two and a half hours away by car.  I have a file folder of various bits and pieces of information to paw through and read; some of it is for now (like gardening stuff and the like) and some of it is for when we build the new place out in the country- here are some of the things I picked up in no particular order: Envirolet (composting toilets), The Ploughshare Institute for Sustainable Culture schedule of Homestead Crafts & Skills Workshops & Seminars 2012 (really cool stuff!), Grit Guide to Backyard Rabbits (this I paid for because it looked like it would nicely supplement my Storey guide), various handouts from Peaceful Valley Farm & Garden Supply, The Clockhouse flyer from Eagle Log Cabins (Vicky described all their cabins as being made from Siberian pine and the general price and clever interlocking design of both solid and two-skin walls leads me to think they may be imported Russian dachas, but this is a guess), a flyer from Granite Transformations which uses 100% recycled glass for making counter tops (they are really pretty), flyer from the American Livestock Breeds Conservancy, Tulikivi masonry heaters, Kinder Goats, Fungi Perfecti catalog, SunWorks solar food dryer, and Living Shelter Design Architects (straw bale construction).

It was interesting to see the diversity of different types of people that attended; there were old hippies and young hippies, of course, but seriously elderly couples barely getting around, to this woman: 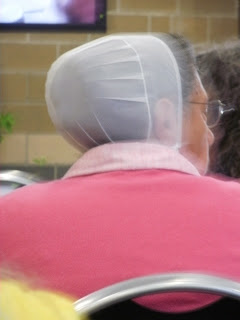 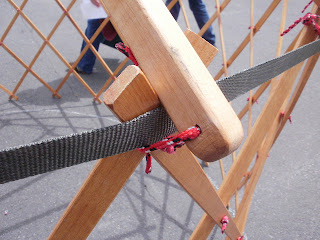