With the exception of one little patch of welded wire to put up in the west side tree trunks, I am done with the wiring and roof for the new Hensdeep.  All I have left for perimeter security is to dig down along the fence line and bury some welded wire to keep digging bastard raccoons out.  I also need to frame and then pour a concrete sill for the door.  I am going to be seriously annoyed, if after all this effort, I lose a hen. 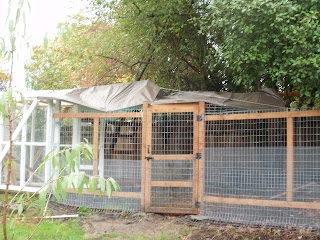 Then all I have left to do after finishing the perimeter is to assemble and install the waterer and finish up the feeders, but the good news is that with the tarps up, I can work out there in the rain. In fact, I kind of wish it would rain while I'm out there so I could see how well or badly it's all working.

I know it looks like butt, but it was cheap.  The tarps cost all of twenty bucks for the two of them and they're not a ridiculous shade of blue, which would look truly awful.  At least they somewhat disappear into the background.  Steve says that they are a good camouflage in case my egg production facility is hit by an Allied bombing raid. Speaking of Allied bombing raids, I didn't consider what they were going to look like with bird shit all over them, because they are still under the trees after all.  Oh well.

They also cover roughly half of the space which is punctured by tree trunks and makes roofing a tricky proposition.  Actually, I think the Photinia are technically shrubs or bushes, but they got left to go to the dogs long before we ever showed up, and since they provide the only shade in the yard, they won a reprieve from any hard pruning (read: cutting down).  At any rate, they were incorporated into the roof structure when I lag bolted a two-by-four to them and then attached everything else to that.

Today is Sunday, so I've another day to work on this.  I'm hoping to have it all together in the next couple of weeks.

But I'm very nearly there.

This does NOT look like butt - far from it! And you can trust that I know, because I have been on many chicken-related field trips with Kim to local farms and I have seen a huge variety of poultry accommodations. Compared to most of those, yours looks trim and well built and practical - just as I would expect!

I can't wait for your post that announces the arrival of the first residents!

Thanks for your kind words, Miriam. I just want it to work!

If that looks like butt to you, I'd shudder to think what you'd think of the monstrosity that was my coop! No chickens currently, but before we do get layers again, I *will* have a new coop - one closer to the house instead of stuffed away in the far reaches of the barn, one with power and water nearby, too!

Allied bombing raids? Why the allies? Don't you need some anti-aircraft guns?

My guess is that hawks would be the greater concern than predator drones.

I think it looks pretty dang good. Hope it keeps the 'coons at bay...

Power and water would be good Amy L, but it's hotter'n hell closer to the house and we shall fry no bird before its time, to paraphrase an old Almaden Vineyards commercial.

Allied bombing raids was probably chosen for its ridiculousness. Or that we are on the same general latitude as Normandy, rather than somewhere in the Middle East. The greatest concern would be the raccoons that proliferate my neighborhood, thanks to Dick Knofle and his three, yes 3, giant raccoon feeding stations in his backyard.

Actually I think it's looking really good. You should see ours!!!