I Did It My Way


I guess the first thing to tell you about my automatic chicken waterer is that it was born of sheer laziness. The chicken waterer had to be relatively low cost and low maintenance, and dare I say it, automatic.

So down to the box store I went. Now that I've written that, I'm not so sure that hiding Home Depot's identity in this tale serves anybody well, because I have certainly had some seriously bum steers at Home Depot.  But this time, I was ably assisted by a plumbing clerk who also happened to be a woman, which was helpful.  A woman helping a woman with a project is going to be a LOT more helpful than a man helping a woman with a project, because she'll be more supportive.  I cannot tell you how many times I've been brushed off by men who have either told me the wrong thing or an out-and-out lie (yes, there is so such a thing as an offset ratcheting screwdriver and it's right behind you, asshole) or worse, patronized me which irritates and annoys me beyond expression.  Maybe it's because I've had a little experience with plumbing and a lot with other projects and thus exuded some confidence or maybe I'll never know, but the clerk I asked help of had never advised anyone on building an automatic chicken before, but she was game to try and we figured it out together. 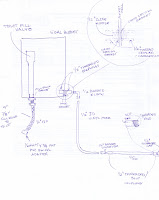 I've included a fleshed out diagram of what I did. I did not take blow by blow pictures of how I put it together because I didn't know as I was putting it together if it would work, but because it did, I'm listing the instructions for it below.

Here's your BOM (bill of materials*):

You will also need some PVC primer and glue, and teflon tape, and a ⅞" spade bit and a ¾" spade bite.  You also need to decide if you will hang the bucket or set it on something.  If you set it on something you will need to make sure there is a big enough hole for the supply line.  If you hang it, remember that water weighs approximately eight pounds per gallon, so you need to support approximately forty pounds. I chose chain that tested at fifty pounds.

Couple of things: the ⅞" spade bit is for drilling a hole in the bottom of the bucket, so it should match the bottom end of the toilet fill valve. In my experience, a ⅞" hole was exactly the size of the core of the outside of the fill valve, so it screwed in perfectly. In fact I had to shave off the lip of the gasket that comes with the valve that normally goes through the hole in the toilet tank.  I used the large piece on the inside of the bucket and the cut off piece on the outside between the toilet fill valve locknut and the bucket.   The ¾" spade bit is for drilling a hole in the side of the bucket for the line leading to the watering valves- this size is just large enough through which to thread a ½" close nipple*.

To assemble the waterer:
The next step is to attach the hose and then fill it, so either hang it where you want it or set it on whatever it is you want it on.  Then screw in the Gamma lid.

Wrap some teflon tape on the threads of the male end of a garden hose.  Screw that into the ½" MNPT x ¾ FHT PVC swivel adapter on the end of your supply line.  Get it good and tight. 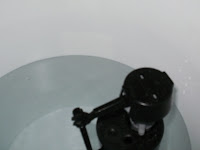 Now go turn on your hose on low and fill your bucket. Once the bucket is full, the toilet fill valve will stop the proceedings. Check over everything and make sure it isn't leaking anywhere. Once you've determined that you did a good job, turn off the hose, remove the cap from the end of the pipe and drain the system. 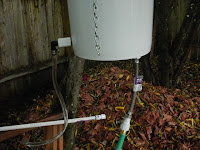 Now you can drill 11/32" holes in the pipe and screw in the chicken watering valves, and then hang the pipe for the chickens. You may need to seal these with a little silicone sealer, depending on your skill and the valves you purchased.   I haven't read this anywhere, so I can't verify it, but it seems to me that you want to hang the pipe along a wall so the chickens can't roost on it, or they will.

But that is pretty much all there is to know about building an automatic chicken waterer my way.

I'm thinking the automatic pop-hole opener is next (or maybe I'll just buy one). 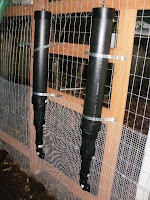 A couple of weekends ago I got the feeders finished and in. 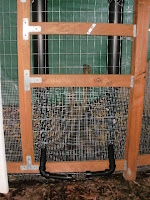 The ends are not glued on so that I can take them off and clean out the feeders. 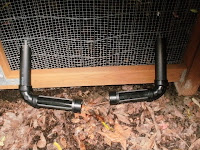 Today I got the automatic waterer put together and the only place - the only place-  where it leaked was where the hose connected in.  Some teflon tape on the hose threads fixed that, and it's holding just fine.  It worked!!  I got really good help from a clerk at Home Depot figuring out what I needed to do, but managed to miss a couple of  items on the first trip so today we got the few remaining pieces.  I drew a diagram of the whole thing which I'll post later if anyone is interested. 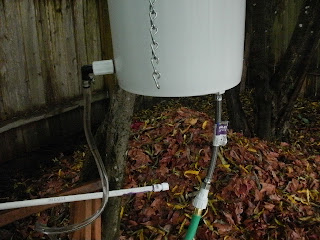 I haven't tapped holes for the watering valves yet because I need figure out where the business end of the system will go. I suspect that if I put it out somewhere in the middle of the enclosure the girls will perch on it.  I think it needs to go along a wall or something, but I'll figure that out.

After all this is done, there are only a few more things to do before I can bring home the girls: I need to dig along the fence and bury welded wire to keep critters from digging under, which I've started digging.  Having wired everything else will be all for nothing if I don't keep raccoons from digging under the fence. I've seen raccoons at three o'clock in the afternoon, so if the girls will be in the enclosure in the afternoon I have to be able to protect them.

For the same reason, I need to pour at least a concrete sill under the door, but want to pour a step as well, which means I have to frame for that, but framing won't take long.

And then finally, I need to whitewash with a lime wash the interior of the coop to make sure that it's clean and sanitary for the new residents. I'm hoping to get Steve to do that because he paints better than I do.

And now the exciting news.

This week my boss said that he had a present for me.  It turned out to be parts for a hoop house! 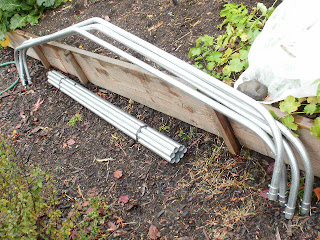 It was really hard not to get started on this but I decided that I need to get my current projects finished before starting another one.  But I'm pretty sure I know what the next project will be.

Keeping Myself In Stitches

Gor- it's been nearly a month since I last posted! It can't be because I'm so very busy doing householdy things.  Well, in one respect I have.

Work has been a nut grinder lately.  I get in to work at 6:00 a.m., usually don't take a lunch, and really try to get out of the parking lot before the gate closes at 5:00 just because it's a hassle to turn off the car and go swipe my fob across the gate keypad to open the gate again.  If I'm lucky and I can get out at 4:00 p.m., then I've only worked a ten hour day.  Then there's the traffic and another half hour before I get home, in the dark, so I'm not good for much these days.

Steve was concerned about a penchant I developed for playing solitaire on my computer.  Which is rich, given his propensity for playing video games for hours at a time, but life is all about the double standard, no?  Anyway, I thought I'd get him off my back by knitting something, but when I left bags of yarn in the living room for a couple of weeks on end it dawned on me that knitting is not what I wanted to do.

I wanted to embroider.

I used to embroider a lot as a young teen, but I don't remember making anything useful.  It has been far too many decades for me to admit to since I last embroidered but it turns out handwork is a lot like riding a bike.  You never forget.  Actually, that's only what I've read about riding a bike.  It's been several decades since I was last on a bicycle as well, so maybe the jury is still out on that one.

Since we'd just purchased a new sheet set from Costco (they have everything! Or as my brother-in-law puts it- if it doesn't come on a pallet, we don't want it), so I stitched on them. 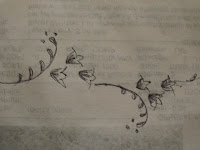 First I made a design based on some designs I copied from a book on Colonial embroidery.  (Copied as in traced them.) 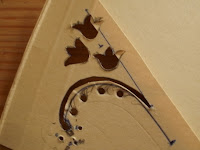 Then I made a template of the design so that I could repeat it exactly. 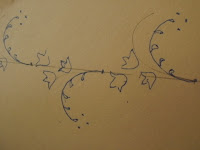 Then I repeated it along a line.

And then I cut out the template, which I used with my pounce box to leave the design along the edge of the pillowcase.  Doesn't 'pounce box' sound wonderfully colonial? 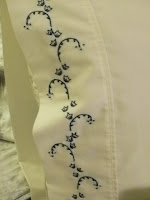 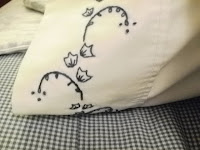 This is the finished project.

I also embroidered the second set of pillowcases and the top of the sheet with a different design in red with which I'm very pleased.

Now I'm all embroidered out, so if you'll excuse me, I've a game of solitaire on which to catch up .

*I have more to report, some of it exciting, but the pictures didn't turn out, so I'll get more pictures and then post my news.
Posted by Paula at 7:06 PM 3 comments: