It's All Going According to Plan


Well, we did it.  On Friday the 18th of January, 2013 we paid off the mortgage. Today we received the loan payoff confirmation in the mail, and somewhere in the next three months, we'll receive the title to the house in just our names without the bank listed as co-owner from the county in which we live.

As part of our cost-cutting measures, we moved banks as well. Saturday we closed the old account and took a cashiers check with the remaining balance on it over to the new bank.  There are a lot of things to remember to do when breaking up with your bank; I had to coordinate a variety of transactions to get everything cleared up before the breakup, which finally occurred this past Saturday.  A large part of the reason I wanted it coordinated carefully was that I needed to make sure we had the whole thing cleared out by the end of the month because of exorbitant bank fees if your balance falls below a certain amount.  (Okay, $25,000.  We think that holding our $25,000 hostage to save $30 a month in account fees is pretty expensive for services we no longer need.)

Then Sunday, I built The Chart.

The chart starts with January 2013, so we'll be able to see an immediate reduction in our expenses because the mortgage payment won't be part of them going forward.  This also means that seeing a further reduction in expenses is going to be harder to accomplish, but that is the next goal: paring down our monthly spend.

Steve is already looking at how to save money on the phone bill, and he had the great idea of going with Clearwire for our internet connection and losing Comcast Cable altogether, which would have saved us several hundred dollars a year.  Unfortunately we are just a few streets beyond the reach of service, due to surrounding hillsides. Darn!

My job is to do a better job of planning our grocery trips and using stuff up in the freezer and cupboards. We are going to try making better, more comprehensive grocery lists and stick to shopping only twice a month, preferably on the off weeks from the 1st and 15th of the month.  I also have to rein in my trips to Amazon, and then find other ways to pinch pennies.

I think I should set the record straight regarding our solar system costs, only because I'm not sure that everyone would be able to realize the savings we did by having one installed.

Steve is factoring in the four years of tax advantages to our state income tax, the one year tax advantage from the feds, and the rebate from the Energy Trust of Oregon.  I don't know what the current tax codes allow for solar PV and hot water installations, or if any other states or provinces or even countries have the same kind of energy entity that the state of Oregon has, but our calculations will undoubtedly be different than your calculations.

For one thing, we do have really low energy usage, but that's because we work at it. Besides the usual turning lights off and putting as many devices that pull phantom loads as we can on power strips so that we can turn off said phantom loads, we also hang-dry our clothes most of the year.  In the summer, it's all out in the backyard, but during the winter, our laundry takes up a lot of space in the living room opposite the wood stove and on the airer in the kitchen;  not everyone wants to live up close and personal with their underwear but it's something we're willing to do to save money.  Plus, it's just the two of us, working in tandem to keep our usage down.  God help you if you have teenagers in the house.

The other thing to consider is where you are in the world: if you're in Arizona or Colorado, you are going to do a lot better than we are and may be able to use more energy than we do because you're producing more but even that might be a net equation factoring in your air conditioner.  We don't have one and have decided that we'll never have one.  If you live in San Francisco where much of the summer is shrouded in fog, solar may not work for you. I don't know.  There are a lot of things to consider for your own individual situation.

I just wanted you to know that there were mitigating circumstances that made our final costs so low and that we do have freakishly low energy usage.  If you're thinking about solar, you still should still consider it- just don't expect your results to be the same as ours.

They could be not as good, but they could also be lot better.
Posted by Paula at 10:35 AM 2 comments:

There's Something Wrong With Us

I currently have a pot roast on the wood stove; Steve is finishing up baking the home made bagels, and I'm looking for a recipe for savory waffles so I can make waffles this afternoon to bring with me this week for breakfasts at work (to alternate with the bagels).  We frequently discuss what we're having for the next meal (and sometimes the one after that) while we're eating the current meal.

There's something wrong with us.
Posted by Paula at 1:40 PM 4 comments:


The numbers are in:  we are doing way better on the return from our solar PV system than we are at the bank.

Here are the results in Steve's own words:

We will not truly know if our system was sized correctly until the end of March when any excess credits are transferred to the low income assistance fund."

We could have opted for the program whereby our local utility would cut us a check for the excess of what we produce, but that would have meant a minimum of a 6 kWh system, and we would have needed a larger roof for that which would mean a bigger house, which would have resulted in a higher mortgage payment, which would have pretty much defeated the purpose.  I am just fine with what we have- we pay $10.26 a month to be hooked up to PGE, which we use as a giant battery, and any excess produced will be donated to the low income assistance fund at the end of PGE's period in March.  I doubt we would go off grid until we're out in the country (which is back on the table - Yay!) at which point we'd be working with a low-voltage system anyway.

As it is, our electricity costs for the entire year is only $123.12. If we're careful and continue to at least use the same or less electricity  than we produce, they will always be only $123.12 for the entire year, until such time as PGE sees fit to raise the cost of being connected to the grid, of course, which will reduce what goes to the low income assistance fund.

I wish I could do that well with the natural gas bill.  The only thing that makes that spike is if Steve brews beer.  Last month's gas bill was a whopping $31.13 and I'm sincere about whopping because the month previous it was in the $25 range.  In the summer we use almost zero natural gas because we don't cook indoors and that is the period when the solar water heater is rockin' the hot water. 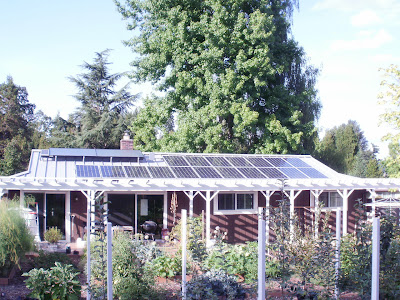 By the way, this is all happening in the Pacific Northwest, where the only thing thicker than the persistent mist that falls almost three quarters of the year is the abundant moss growing on everything.

If we can do it, you can do it, so if you're thinking about solar and can afford it, do it.  Part of what made this work for us is the fact that we saved up and paid cash for it, but if your results were the same as ours and you borrowed at 3% for it, you'd still be ahead.

It would still be a great investment.


New Year's Day is a day for resolution making for most folks, but not me.  If there is anything I've learned it's that I'm not going to change. At this point,  I don't even think I'll make goals for this year, as I find that life has a way of tripping itself up.  If you want an abject lesson in humility, try listing the so-called goals you are going to get done in a year on your blog for all to see.

I can tell you with better than reasonable certainty that I'm going to learn a lot this year.

For instance, I have already learned that the "North Dakota" trick of leaving something dripping in order to keep it from icing up does not work.

This greeted me when I went to go check on my chicken waterer: 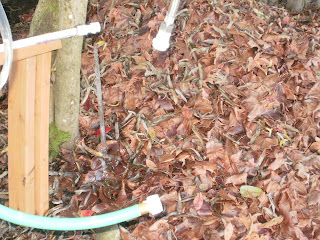 I did not uncouple the hose from the supply line.  I'm not even sure how this happened.  I can tell you  that both hoses are frozen solid.   In fact, there was a stalagmite of ice rising up from the floor of the enclosure. 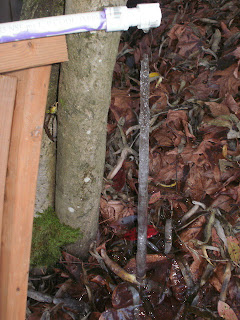 So I can also tell you with reasonable certainty that I'll have to figure something else out for watering chickens for next winter.  Maybe a heat trace system, and I'll have to get help with that, but I am pretty sure I can get help from somebody at work.

I can also tell you with reasonable certainty that the apple trees are growing a lot faster than I thought they were.  This week we got the next level of wire up for the espaliers, and I found that the trees had grown around the wires holding them to the espalier.  I have to monitor their growth much more closely this year.  This is one that I could not fix. 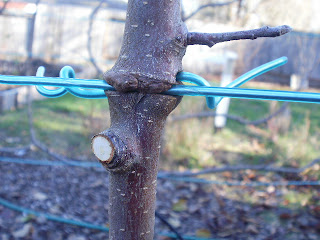 I sometime wonder if I should rename this blog "What Not to Do". Maybe if I had a Reasonable Certainty of getting fruit from them, that would be one thing, but I can't even do that if the raccoons are going to beat me to them.

But pay off the mortgage and get chickens.  I am reasonably certain that I can do that much.

Everything else is up for grabs.