My buddy Rae and her husband LJ were here Saturday and brought my chickens, who lay me three eggs yesterday.  They only lay me one today, but I think that is more a testament to their stress over the ride over here.  Thanks to LJ and Rae for finishing up the watering valves while I made dinner, and to running over to the hardware store and getting bigger pipe and fittings while I made dessert.  Thanks also to both Rae and LJ for the girls. I'm stoked- I have chickens!! 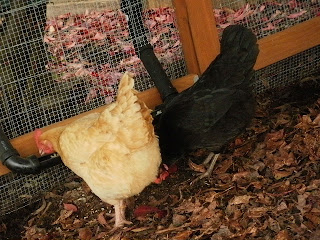 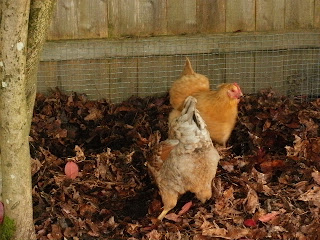 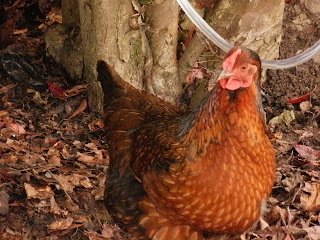 This is some sort of mix- I can't remember what. Rae is going to have to chime in here.  This one's really pretty. I also don't remember what the other mix was but the rust and gray one is a pretty bird as well. Somebody is laying olive eggs, due to a breeding experiment of Rae's. Pretty cool. 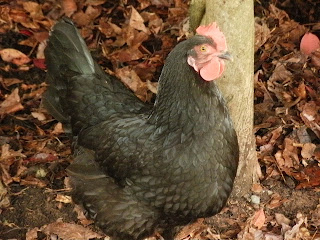 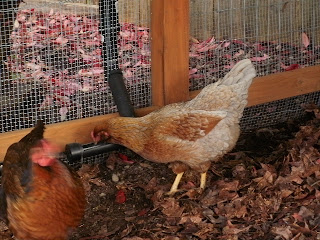 I think this rust and gray one is my favorite.  She was first up the ramp and into the coop to check it out.  She found the feeders first, and she found the waterer first. 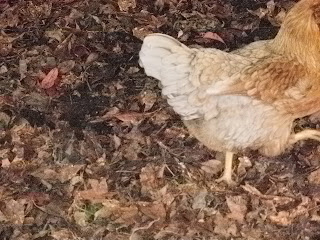 Back on the ninth I told you that I ordered my wine grapes and wondered if they would ship them or if some state agricultural edict would keep them from me.  Turns out I suspected right.

I tried to email them for a ship date and they wouldn't return my message.  So I finally called them and they said they couldn't ship to Washington, Oregon or California. So as sweetly as I could, I asked them to please refund my money (since the first thing they did was charge my credit card).  They said they would and send me an invoice as well.  I was not too pleased with Northeaster Vine Supply.  We'll see how long the refund takes or whether or not I have to write to the Office of the Vermont Attorney General.  I think they're probably pretty small and overwhelmed by their large vineyard orders, but they could at least put that information out there, or be better about responding to me. Not responding to me is one thing, but mess with my money and now you have a problem.

Now for the good news: they did recommend me to a grower here in Oregon who sells the variety that I wanted, which is Marechal Foch.  Marechal Foch is a red wine grape that does well in heavy soil, which is exactly what I have.

So sometime in May I get to go get my grape vines.

I think I'll pack a picnic.
Posted by Paula at 8:18 PM No comments:

It's All in the Name

We don't normally pay for newspapers but there was a free portion of one down at the end of the driveway, which Steve retrieved when he got the mail.  As suspected, it was largely circulars for the local food purveyors.

I sat on one side of the living room with my computer and he sat on the other.

"When are we going to go attack that ham?" he asked.

"When I'm done with this round of solitaire," I answered, dreading the chore we have ahead of us, inertia thoroughly cementing me to the seat of my comfy chair.

He picked up one of the food ads and started perusing it.

That struck me as a ridiculous name for a ham brand.

"Amish Pride," I said derisively. "I wonder what moved them to choose that name." Honestly, marketing is so dumb sometimes. Amish Pride.  Two words you would not expect to see paired together in any other setting.

"Because it sounded better than 'Rabbi Select'," he replied, and turned the page.

We've been putting it off long enough, so today we are smoking the ham.

It is part of the half pig we bought last year that has been languishing in the freezer for, oh, probably over a year.

Steve mixed up the brining solution and dumped it and the frozen pork leg in a five gallon bucket. It was such a monster that it didn't completely submerge.  Once it was defrosted, though, Steve was able to shove the whole thing under the brine's surface and it kept just fine out there out in the garage for a week and a half. 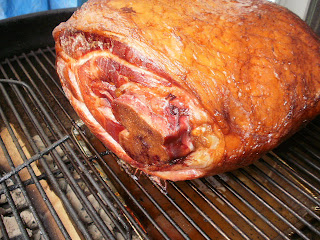 This morning he started the fire and it spent about four hours out in the kettle.  Now it's in a 250 degree oven until the thermometer reads 150 degrees.  That's Fahrenheit, for those of you in other countries.

This pork leg probably should have been cut in half- it was all I could do to carry it into the house.  However, it will feed us well, and for awhile.  I'm already thinking of all the things that I can make with it, especially the bone.

I'm not one for slices of ham for dinner or even in a sandwich so much as I like bits of ham in things, making them taste good.

Used in bits and pieces, this ham is going to feed us for a very long time.
Posted by Paula at 5:44 PM No comments:

Teaching Steve to yeast bake was the second smartest thing I've ever done, and he knows that, but honestly?

It's a double edged sword on which I'm trying not to fall. 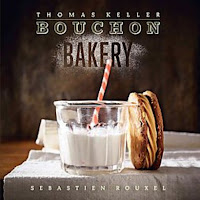 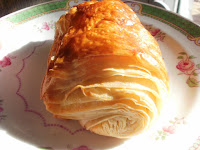 Cut to a couple of weeks later: the first thing we attempt from the book is croissant dough, so that we could make Steve's beloved Pain au Chocolat. Success!  The recipe makes eighteen, so we assembled nine and froze the other half of the dough for another weekend.

Steve has been reading the book and learning from it ever since.   His next project was a loaf of bread, which he baked in a cast iron Dutch oven a la Jim Lahey from Sullivan Street Bakery, but he used Keller's dough recipe.  It was a better tasting loaf of bread, much to my surprise.

Even though he's been making bread several years now, there is a lot of information to be gained from this book.

So much so that it's inspired him to poetry:

pâte fermentée
poolish and biga are cool
levain is a pain

Saturday was gorgeously warm and sunny for a change and would have been a great day on which to get some yard work done, and was what I wanted to do with it.  Instead, I spent the first half of the day at the eye doctor and another few hours grocery shopping.  We also bought a bag of layer ration and oyster shell and a bale of hay at the farm store, because I'm getting ready for chickens.  So not much got done on Saturday.

Sunday was overcast, but all mine, so I made good use of it. 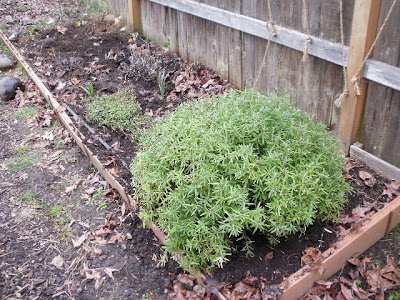 First I trimmed and moved the rosemary. I also pruned back the sage and the oregano and move those too.  All the herbs are going into the same bed with the hops.

I wanted to move the tarragon, thyme and chives, but the compost pile was in the way. 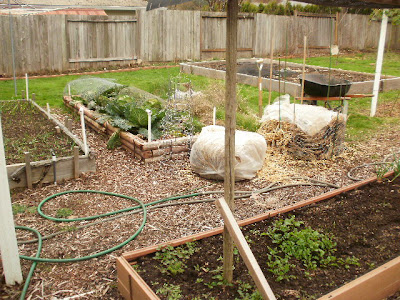 So I moved the compost pile.

I really wanted to get some things done in Hensdeep so I moved the waterer to a better location for both the birds and the eventual rabbits.  I also put another tarp over the top because I decided that the feed would get wet if I didn't.  The new tarp looks like butt and it's really dark in there now so I didn't take pictures. 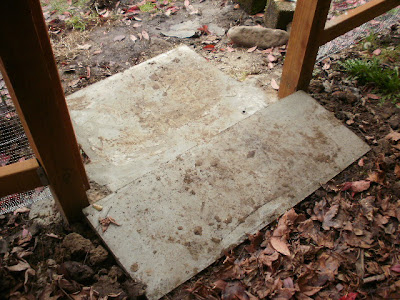 This is the new step/sill under the door.  I had to fix the side of the door which fit when I first hung it and then swelled to the point that I couldn't shut the door.  That little hole is where the cane bolt will go. 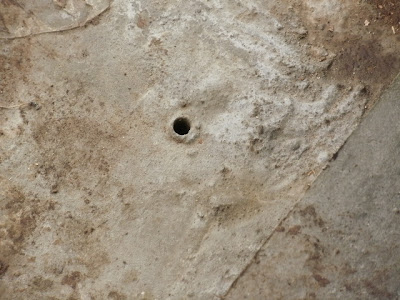 That little hole.  Yeah- it's for the cane bolt which I will install later. If I ever find it. 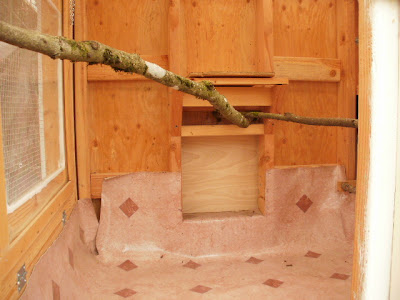 Then I fixed the doorway for the clean out doors so that they will fit better and close properly. I think I'm making the tolerance in my doors a little tight because they always just fit until they go outside when they get wet and don't fit anymore.  This is that side of the coop open with the new roosts that I just put in this weekend.

Then the last thing I did was nail up a board over the door to Hensdeep and some leftover metal from when we had the roof done.  I made the roofer leave all the leftover pieces because I figured 1) I paid for it- if there's going to be any scrap I'll take that few dollars, thank you and 2) it could be useful someday.  I think that it will come in mighty handy when I get around to rabbit hutches some day- I've read that rabbit urine gets all over a wooden hutch and makes it stink, and I need to keep my hutches odorless, if I can't keep them minty fresh. I don't need anyone complaining about my animals. 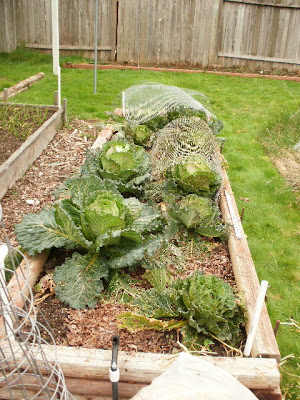 This time of year is great for the brassicas- the January King cabbage made it through the winter like champs and are getting covered with wire the closer they get to maturity.  Next weekend we'll cut it all and make sauerkraut. 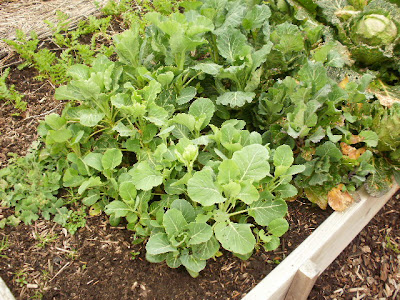 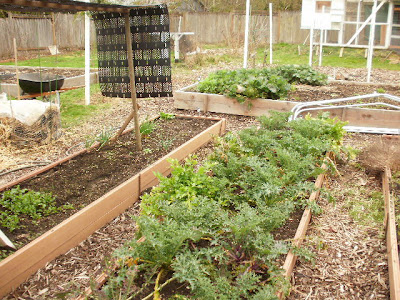 The kale (in the foreground and the bed further back) is still going strong.  I've discovered that I don't much care for the White Russian kale- it's a bit curly.  I much prefer the Red Russian kale.

I have garlic and leeks started and in the ground, but I haven't started any seeds yet. I'd better start this weekend if I hope to get it all done in time.

The hyacinths are blooming out front and the daffodils are threatening to, but the asparagus isn't up yet, so it's still not quite spring in my book.

I ordered my wine grapes today.

Since I live in a wine-producing state, it will be interesting to see whether or not they actually fill and ship my order to me, or if they claim some excuse that will be the fault of the local wine grape growers.