I have a long history of things not turning out like I'd planned.

I remember one incident where I'd purchased a sewing pattern and several yards of a lovely crepe de chine, with the intention of making myself a dress. Which was unusual in itself- I sew- I just don't wear dresses. At any rate, the dress was a soft, floaty thing, and I could have easily done it, but my friend Liz wanted to make it for me, so I let her.  The day it was finished, she brought it over for me to try on. I was a bit dubious; there seemed to be an awful lot of material in it. She helped me get into it, and my fears were realized.

"Jesus- this thing looks like a parachute," I muttered. It really did.  It was a pile of dress with me somewhere in the middle of it.

She tried a couple of times to adjust it but nothing ever worked out and we finally and collectively gave up on the project.

My latest fiasco: remember those cherries I took a picture of for you last week? Well, they're brown and shriveling on one side, and I'm going to have to go through my books to look for a picture to see if I can figure out what's wrong with them.  I hope it's something stupid, like I shouldn't have watered them (it's been hot lately), and not something hard to control, like some insect.

So it's with some trepidation that I announce my latest project: I'm going to try to select out a new strain of kale.

We eat a lot of kale, so I grow a lot of kale, and I noticed this spring when the clustered stuff in the long bed started growing again, there was one each of the white russian and red russian kale that had flatter, less curly and less indented leaves, which would make them easier to handle in the kitchen.  In fact, the white russian is so curly, I'd decided not to grow it again, until I saw this one plant with the different leaves.

I'm hoping to select for this:

This is going to take several seasons, but for starters, I left each special plant in the bed, and they'll stay there until their seeds are ready for harvesting.  I'll have to figure out a spot where I can grow their offspring to seed and keep doing it until I get seed that I can count on.  I don't even know if I'm doing it right, but I think so.  If I remember correctly what little about it Carol Deppe mentioned in The Resilient Gardener, I should be good.

And yeah, I know. There are probably varieties out there similar to what I'm selecting for.  But I want to try anyway.

I just know better than to try to name my creations at this point.

While some of the country is still reeling under the weight of freakish snow or rising waters, the Pacific Northwest has been drying out in summer temperatures and sunshine.  Weirdly hot.  Where last year, we didn't get summer until the third week of July, and it was strangely mild and spring-like, this year summer has come in the middle of spring.  This coming Sunday is forecast for 87F (or 30.5C). Last Sunday it was eighty-five.

And while I can't tell you I've been busy making hay while the sun shines, because I don't make hay (not yet anyway), I have been pretty busy.  We're only seven days in, but May is busy. 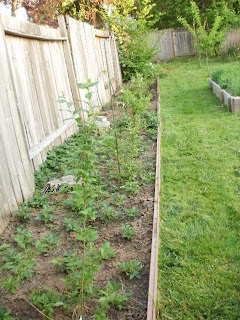 I finished transplanting all those free strawberries into the blueberry bed, so now it's just the berry bed.  And I weeded it. I'm still weeding it.  I'll probably weed it all summer.  However, it is pretty well covered in strawberries, so I won't be pulling as many weeds.  I'll also be pulling strawberries. 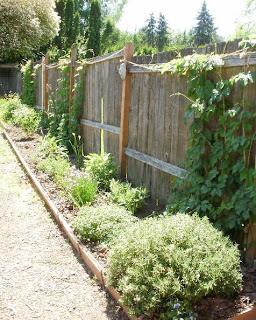 I finished moving my herbs into the hops bed, so now it's the herb and hops bed.  This bed still has a lot of weeds at the far end, but I bought some tea herbs that I've been wanting and they'll go in once I have it all cleared.  It also has a few perennial flowers in it (bachelor's buttons, columbine and my favorite, peonies), so it should be really pretty eventually.  The hard part will be staying on top of the neighbor's grass that comes from under the fence. 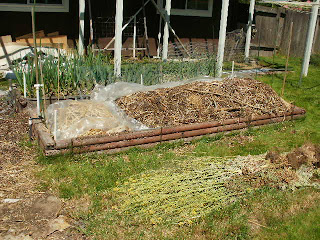 This is the compost pile for this summer, with the garlic and leek bed behind it.  This will be the last year for these beds here, because I want to move them for the oven/cistern/permanent compost pile (I'm really tired of moving it) area.  This is still a fuzzy picture in my mind, because I want to house all this under a single roof.  But that comes later. 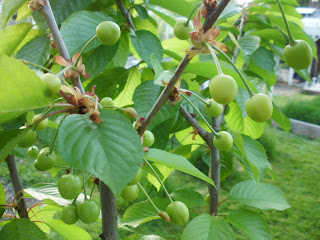 Cherries!  This is the new Lapins cherry, which I put in a year ago right after Christmas.  It came from the Dave Wilson Nursery, which is a large grower of fruit, nut, and shade trees.  It has far more cherries on it in its first year, than my first tree still does, which is going on three years old now. It's a great little tree.   I need to keep an eye on it though.  I would sure like to have some of my own cherries this year. 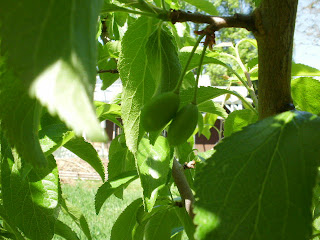 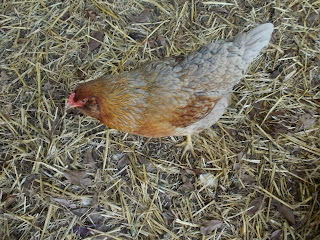 I am really enjoying having chickens. This one's Tommie, and is the only decent picture of any of the chickens that I have so far, because it's really hard to get chickens to hold still for the camera.  They're somewhat obstreperous as well.  It's really hard to get chickens to just. shut. up.  However, they make up for all that with delicious eggs.  I've read that there is no difference in the taste of store bought eggs and eggs from the backyard, and that may be true if all you feed them is commercial feed, and we both think our girls lay supremely delicious eggs, but that might be because they get a lot of greens.  Steve feeds them dandelion greens during the day, and I give them more when I get home.  It might also be because they are super fresh- can't beat that.  The chickens are also entertaining. I've enjoyed watching them and figuring out the pecking order: Buffy is the Grand Dame, and rules the roost; her buff sister Blondie is her lady in waiting; I thought the black sex link Becky was at the bottom, but I've figured out that she and Tommie are constantly vying for the middle, but Big Red is way down there in last position, which is odd, because she's nearly as big as the buffs.   I particularly love bringing them a slug (just one) to see who's going to get it.  Usually it's Red, because she may be last in the pecking order, but she makes up for it by being fast.  If I knew how much fun chicken are to keep, I would have done this sooner. Oh wait.  I did do it sooner.  That version of chickens wasn't so good.  I think it missed beta testing.  Chickens 2.0 is much better. 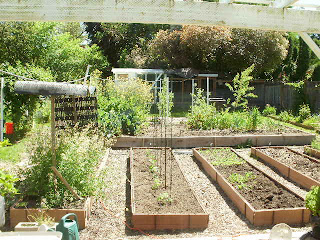 One of our beautiful days, last Saturday, when after coming home from the annual Canby Master Gardeners show, I got right to work and got those tomatoes into the ground.  I was rueing not getting my Oregon Spring and Siletz seeds started on time, but made up for it by buying starts of the same varieties.  I also put in San Marzano (two of each variety) because I'm still looking for the ultimate tomato for my backyard.  I also bought a Mortgage Lifter just to try it out, but haven't figured out where to put it.  I was interested to overhear the grower telling someone that his favorite out the forty-eight varieties he grows is Siletz. 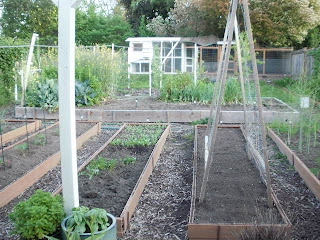 By the end of the weekend, I finished weeding the middle bed (all it has in it now are peas on the far end and some radishes, and self-sown parsley starts, which will get moved to the herb and hops bed), and I got the original strawberry cleared of strawberries, fertilized with COF (complete organic fertilizer- recipe by Steve Solomon), and tilled in. This bed is now ready for the cucurbits I'll sow this coming weekend: cucumbers and zucchini.  I fertilize because I still don't have good soil, but that's my fault.  I really need to sow cover crops this autumn. 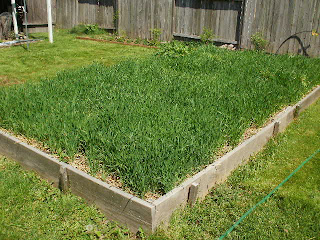 This is the wheat.  I sowed spring wheat this first time, but I am having second thoughts about spring wheat versus winter wheat and here's why: 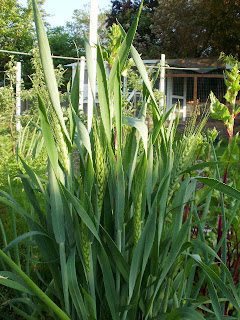 This is wheat that sowed itself from the straw I put in the long bed.  It's already making heads, so I'll be saving this for seed, depending on how well it does.  But sowing at the end of the summer sounds like the way to go.

So this little homesteading/householding experiment putters along.  And I'm always learning something.

How to Build a Bee Skep

Modern Farmer has instructions on how to build a bee skep.