This post is about my neighbor, Larry Brown, and his potato box. Larry is in his seventies now, and when he gets an idea, he thinks on it a good while and then puts it in action.

A few years ago, he put in a garden bed and planted a bunch of tomatoes.  Then last year he put in another one on the other side of the garage door, and then this spring, he built another one.  This is Larry's garden now.  It's pretty, isn't it?  If you look close, you can see his mason bee nests hanging on the upright of his patio roof over there on the left. 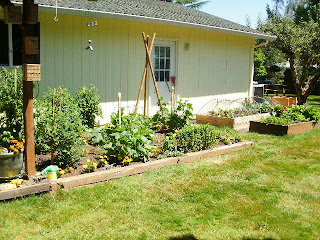 Larry got a hold of a good idea and built himself a potato box. 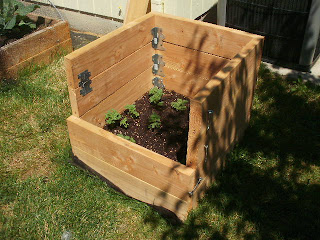 First he made a four u-shaped sides out of two-foot long pieces of 2X6; he connected them from the back using deck screws. 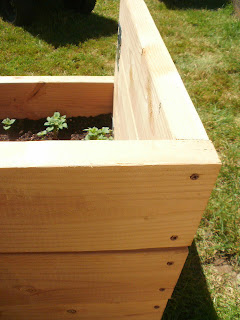 Then he stacked them one on top of the other and connected them with flat and corner plates, and toe-nailed deck screws in through the front.  The bottom level had the front piece screwed on as well. 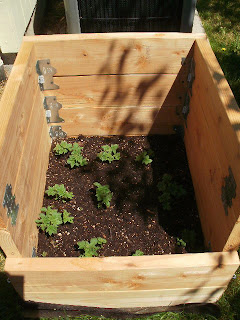 But here's where turned into a tricksy hobbit:  He installed screw eyes into the ends of the next three pieces and hooks into the sides of the potato box such that the hooks snap snugly into the screw eyes. That way, he can put the sides up as the spuds grow up and as he hills up the soil around them.  It will also let him take a piece off in the middle and reach in and harvest spuds as he needs them. 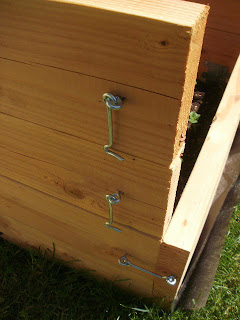 I think this is one of the best designs for growing potatoes that I've seen and I can't wait to see how it will work out.

This is something that somebody with a sunny patio or fire escape can put to use.  Pretty cool, huh? 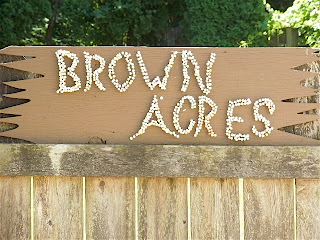 All the girls have been exhibiting broody behavior to varying degrees, but Tommie has been obnoxiously broody of late.  So much so that we had to do something.

So I built a jail for her. 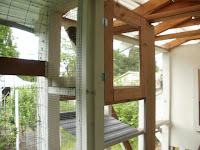 Research seems to indicate that the best way to break broodiness is to isolate the bird in a wire bottomed cage so that her underside will cool off, and once you can get her body temperature down, she'll break broodiness and stop being such a crazy little fiend.  To borrow a term from The Great Escape, Tommie is going to spend three to four days in The Cooler.  Literally.

The jail has a water and a food bowl of course, but more importantly, it has a droppings board, made out of leftover metal roofing. I want to be able to build another broody breaker underneath the first one, because Buffy has also been broody of late, but not so bad as Tommie. 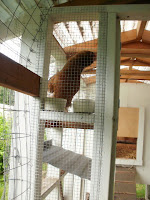 Tommie had actually taken to roosting in the nest box, and we'll have none of that.

Steve said that he came out the other day to check chickens and steal eggs and he saw only two hens in the enclosure.  When he opened the nest box door, sure enough, there were two big fat buff orpingtons and a little black sex link crammed in there.  It's only twelve by twelve. Inches. 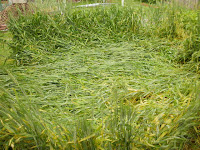 In other news, we had a bad storm blow through early this week and I was crushed to find that it had blown down 85-90% of my wheat.  The sun the rest of the week raised it a little bit, but my understanding is that once wheat is down, it's down.  So bummed, but it appears to have a case of rust anyway, so I'm not even sure it would have made it all the way to maturity.

This year I'm trying potato baskets made of welded wire.  They are wrapped around the two-foot diameter stepping stones that the previous owner left.  I'll put some soil in and then fill it full of the dark, organic stuff from the compost pile, and we'll see how they do. 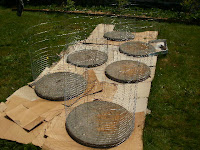 This was all I managed to do this weekend.

A post or so ago I mentioned a neat trick with peds.

When your apples get to be about the size of walnuts..... 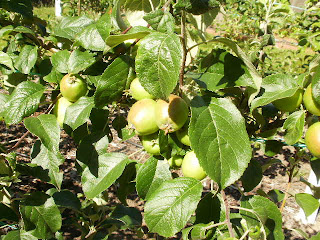 ...get yourself some peds (those little stocking things for trying on shoes) and some size 8 rubberbands.... 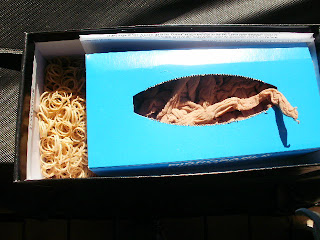 ....and swaddle the apples in the peds, enclosing it with the rubberbands. 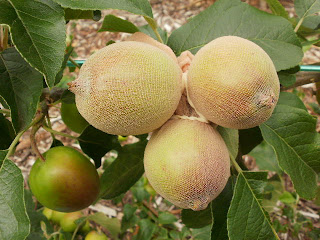 The peds keep the coddling moths off the apples, and as the apples grow they stretch out the ped, which allows more sunlight to reach the apple and ripen it.

I read about this method several years ago and have been itching to try it, which is part of the reason I espaliered the apples.  Aside from increasing yields and allowing more sun to reach the fruit, it was a good way to ensure that I could reach the apples! 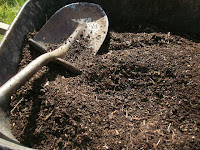 We finally had some good weather again, so this weekend I was able to muck out the chicken coop. But before I could do that, I had to move some compost around.  It's still in the same bed, but I had to re-stack it so that it would continue to rot properly.  That's when I discovered that I had compost I could harvest, so I did. 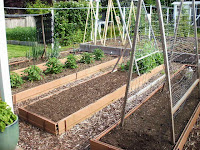 Most of it went into the middle bed there.  That was after I moved some parsley plants to the herbalicious border.  I can't call it herbaceous because that would imply that it's all flowers, which it isn't. 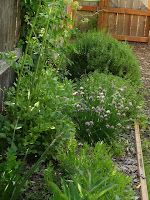 Now it's mostly herbs with a few perennials thrown in.  In order of foreground to background: French tarragon, lovage, chives, oregano, and rosemary.  Behind me are dill, lemon thyme, orange balsam thyme, German chamomile, lemon verbena, and English thyme.  Oh- and flat-leafed Italian parsley.  Quite the international border, no? 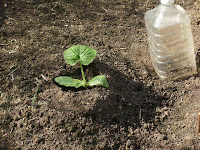 This is the zucchini I saved from the slugs by popping a cloche over it.  They managed to eat every single cucumber I had planted, so I started some more in six packs filled with compost. 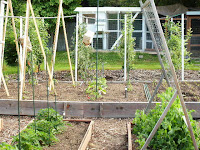 I also worked on cleaning up the orchard, which was full of all kinds of farm-type detritus: chunks of welded wire, weeds, a ten foot piece of PVC conduit, a pile of one foot rebar pieces, and six concrete stepping stones.  It was a mess, but it looks a whole lot better.  I spent a good part of the weekend weeding the pathways as well.  This year I have a pretty good head start on the weeds. 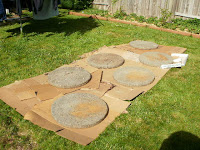 The concrete rounds got moved to a new spot over between the wheat and the laundry dryer.  This year I'm going to try making baskets from welded wire around the concrete pavers, which are two feet in diameter.  Then I'll fill them with compost and soil, and hope for the best.  I probably won't fill all of them though- I don't think I can make compost that fast. 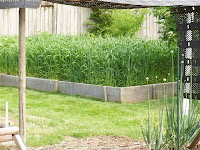 Speaking of wheat, look how high it is already!  This is spring wheat I bought in bulk at Bob's Red Mill.  I have no idea of the variety, though, although I suspect that it was grown here in the Pacific Northwest. 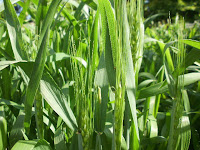 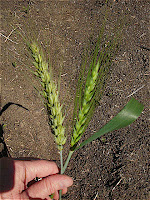 However, the seed heads are not as big as the seed heads on the volunteer winter wheat in the long bed, and by big I mean longer. The one on the right here is the spring wheat, and the one on the left is the winter wheat.  I think it's probably twice as long as the volunteer wheat from last year, which also grew from the straw I bought.  This year's volunteer has a really big head though, so I'm letting the winter wheat in the long bed grow to maturity and then I'll harvest it for seed, which I'll start this autumn for more seed.  I think it will take a few years before I have enough seed to be able to grind some of it, but by then I should have the last bed or beds built (I need to move some trees before I build the next bed, and that requires dormancy).

This is one of the two Golden Russet apples.  They are making up for being the only apples with fruit on them again this year by being covered in apples.  I have a little trick up my sleeve to show you with the apples but I'm waiting for the rubber bands to come in.  I sure wish the other apples would start bearing, though, especially the Bramley's Apple, which is vigorous and sturdy but so far not particularly fertile. 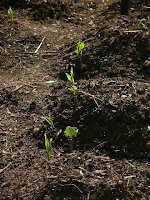 This is two of Three Sisters that I planted: Black Coco dry beans and Painted Mountain flour corn.  The third sister is Sweet Meat winter squash, which is a keeping pumpkin.  Sweat Meat is a Cucurbita maxima, which keeps very well in a cool room in the house.  I plan on feeding all seven of us this winter with it.  That is, the five chickens and Steve and me.


And that is what's been keeping me busy lately.
Posted by Paula at 10:14 PM 2 comments: