Think you can trust just about any food organization that sounds like it's looking out for your best interests?

It turns out that Big Ag is behind a lot of those so-called food advocacy groups that take out whole page ads in the New York Times reminding New Yorkers that they need a mayor, not a nanny, just because their mayor wants restaurants to stop pouring sodas down customers' throats by the gallon. But most of them are a lot more subtle than that, and a lot more insidious:  one front group is promoting its agenda to young children by making its promotional materials available to schools starting at the kindergarten level. The levels to which these groups will go is really stupefying.

"One increasingly common way industry attempts to shape the public discourse is by forming a group that appears to benefit the public.  Often these groups claim to represent farmers or consumers or some other sympathetic constituency when in fact they are funded by powerful industry players."

"Their tactics are designed to hide their true agenda and funders. For example, representatives of front groups often write op-eds or appear as experts without disclosing the conflict of interest."

"While trade groups are generally up front about who they represent, front groups are not. Front groups often have deceptive-sounding names and attempt to create a positive public impression that hides their funders’ economic motives."

Read the report for yourself here.   It explains what and why it's going on, and specifically, who's doing it.

Keep in mind the next time you head to the grocery store: Praemonitus, praemunitus- forewarned is forearmed.

What happens when you stack a compost pile correctly... 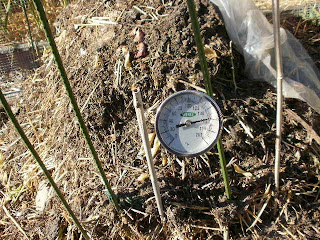 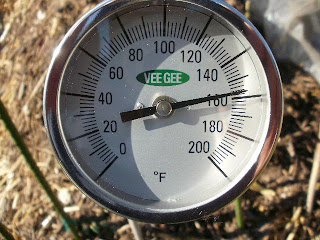 I stacked it Saturday, and today is Tuesday, so this is right on time.  I don't think I've ever had one get this hot before, though.  I layered green tomato cuttings one cutting thick, a thin layer of dirty straw and chicken poop, and a thin layer of what I didn't harvest from the compost pile, over and over and over again.

There are some folks that argue that 'cooked' compost isn't as full of bioavailable nutrients as uncooked compost, and still more evidence to suggest that the best soil is created from wood, but at this stage of the garden I'm more interested in quickly improving the soil I imported, even if it's a nominal improvement.

Maybe some day I can relax about it but right now while I'm digging in the Land of Clay, sooner is better in the tillable soil department.

Especially in the summer; dry clay soil has all the friable tilth of reinforced concrete.

* As a note, while digging through the remainder of the first pile I ran across a section of rotting grass clippings that smelled exactly like fresh horse apples, which means it was rotting anaerobically, which means it didn't get stacked right the first time.  It's really important that you have enough carbon materials scattered through your nitrogen materials to ensure this doesn't happen.  Which means next time Steve is dumping out the grass catcher I need to be there to mix it up right from the git go.
Posted by Paula at 6:05 PM 4 comments:

Per usual, the garden has been keeping me hopping.  On Independence Day, I freed the tomatoes of excess foliage, with the result that the bumblebees were better able to find the blossoms.


The garlic is nearly ready.  I won't pull them out until the end of July. I'm not sure how well this year's harvest will look, but at least they didn't get the rust that last year's garlic did.  Once they are out, I'm pulling out this bed because I need the space for something else.

The wheat is nearly ready and the boysenberries are starting to ripen.  I still have frozen boysenberries from last year in the freezer.  The wheat that fell during that one storm picked back up a little, so I will be getting less wheat than I planted, but more than I thought I would. It doesn't help that one (or more) of the neighbor's cats have been using my wheat patch to play Jungle.

This is half of the long bed.  It's planted in Kentucky Wonder green beans, assorted peppers, onions, eggplant, and three sisters which I did not photograph because it looks like a cornfield and if you've seen one cornfield, you've seen them all.  The good news is that it was a lot higher than my knee, more like my waist, on the fourth of July, so I'm keeping my fingers crossed for a good harvest this year.  The sweet meat squash planted in it are starting to put out buds, and the Black Coco beans are covered in blossoms.  I'm not sure they were the right beans to plant in there; they are not climbing the corn, so I think they are probably bush beans, which is bad on my part.  I could have checked that.

We are getting peas right now (I froze two bags on the fourth) and this bed also has onions in it.  The beets I planted are starting to sprout but the carrots haven't yet.  In another week, I'll start the next succession. To the left there you can see the zucchini; I'm getting squash off that already too. 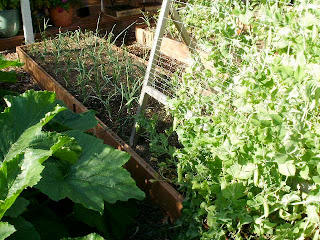 The strawberry and blueberry bed.  I got one, just one strawberry this weekend; the slugs are getting most of them, even though they are on the straw.  But we are getting all the blueberries. 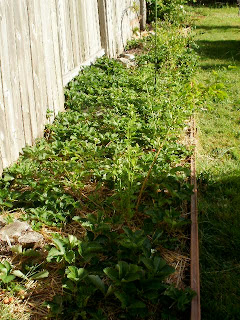 New onion transplants.  I moved those out of the first bed which is fallow, for the most part, so I decided to cover crop it.  I'll sow buckwheat into it tonight as today is an 'above ground' day by the calendar. 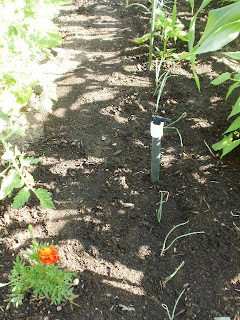 And last but not least, I made seedling boxes this weekend from pallet wood and left over firring strip scraps I had lying around.  The handles were extras left over from remodeling the kitchen five years ago. I think I'm rather late to be starting my fall and winter garden, but these are for my brassicas: pak choi (with which I've have zero luck so far), cabbages and kale.  They'll be transplanted into the big bed after I pull all the wheat and potatoes out of it. Anyway, they're getting seeded tonight as well. 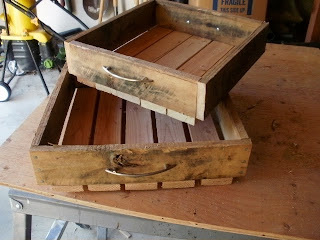 This weekend was really good and productive and all that, but we had some fun, too.  One of the neighbors set up a movie screen out of sheets, two by fours, a couple of ladders and some rigging inn their backyard because they had mounted a DVD player under the corner of the roof of their deck, and they invited folks from our street over to watch Gangster Squad out in the backyard with them.