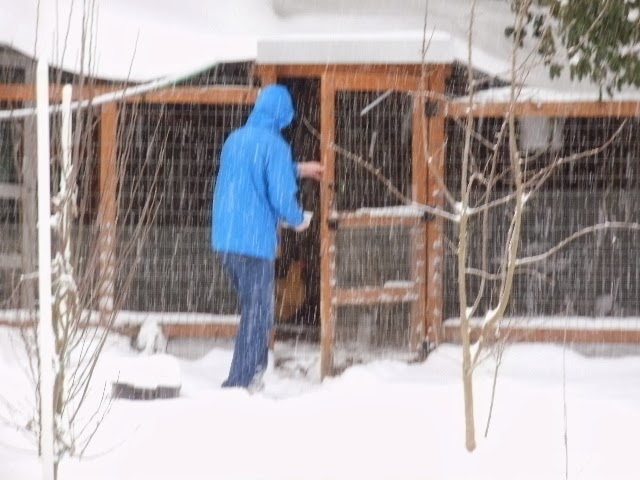 We're under about eight inches of snow this weekend, which is very unusual for the Portland, Oregon area, and it's been really cold during the day.

But the feathered females have nothing to fear because Chicken Daddy is keeping them in scratch, treats, and hot water.

Thank you Chicken Daddy!!
Posted by Paula at 5:15 PM 3 comments:

The Last of The Fruits 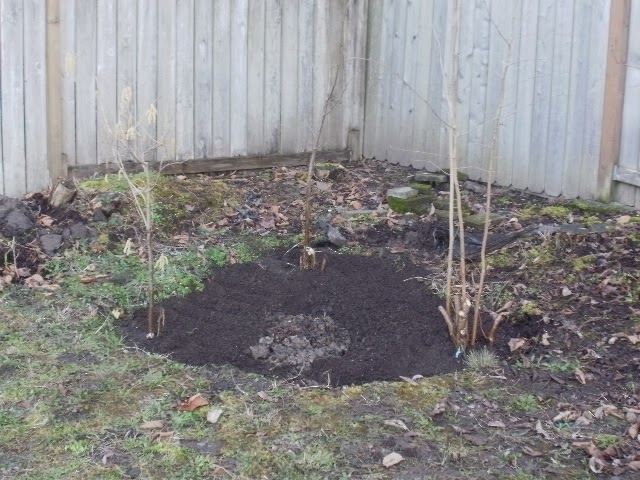 Today we got seven of twelve grape vines into the ground, and my new stone fruits in as well.

First we had to move the three hazels to the back corner.  They've been in the ground since the winter of 2009, however, they were fairly easy to move because hazels have shallow roots.  Then we got started on the grapes. 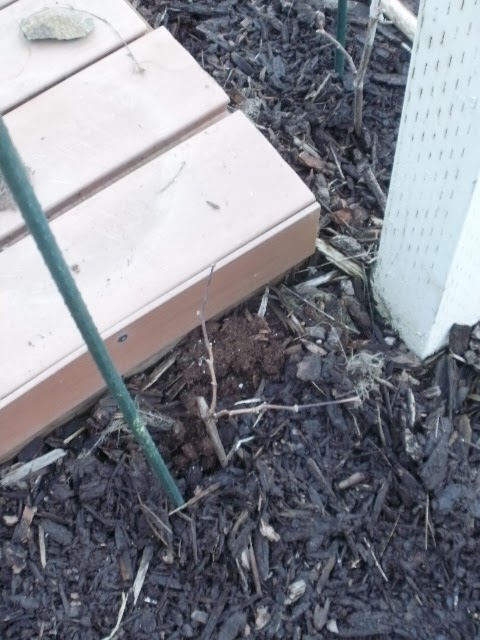 The grapes are Marechal Foch, which are a hybrid (I know) that ripen early, are resistant to fungi, and do well in clay soil. They also have smaller berries, so I may have to fight off the birds as well. I had tried to buy them from Eastern Vine Supply, but after many weeks of having taken my money and not shipping my vines (at eight bucks apiece) I was finally able to get a response from them and found out that they couldn't ship to Oregon.  Ok, can I have my money back please?  That also took several weeks, to the point that I was ready to write the Attorney General for the state of Vermont, when a refund check finally arrived in the mail. This winter they had the audacity (stupidity?) to send me a catalog.

Luckily, I found a grower within driving distance of the house, and they only wanted two and a half dollars a vine, which they would have to propagate for me. That was in March of last year, and Steve and I drove down in January to get my grapes. They are tiny little things, and it's going to be a long time before they cover my pergola. They'll probably start fruiting after the pluots do. 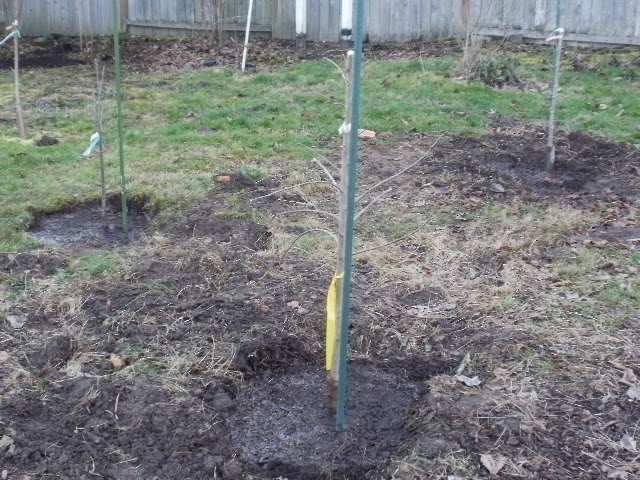 Last September we were lucky enough to catch the pluots my brother-in-law brought to my mother.  He works for the grower, and frequently has fruit on him for tastings.  The variety at Mom's was Dapple Dandy, which is curiously dappled red and pale green and was just delicious.  I'm not a big fan of either plums or apricots, but I loved this fruit. Pluots are interspecific, and wind up being sweeter than either parent species.  So I'm very excited to finally have my pluots.  The second variety is called Flavor King, and he's only there to cross-pollinate the Dapple Dandy.

The third tree we got into the ground today was the Montmorency cherry, which is a pie cherry.  I was somewhat dismayed to discover that I'd bought a standard! Cherry trees get extremely tall, so I am hoping that summer pruning will keep its growth in check.  All I want is a few cherries for a pie. Steve doesn't like cherries, so all the cherries, including the sweet Lapins, are mine.

Tomorrow we'll get the last five grapes in, and then we'll be all done with establishing fruit in the backyard.