Bricolage - The French Word For Something From Nothing

The French have a great word for small construction made from materials at hand: bricolage.  I've been wanting a chicken tractor for a long time for the girls.  Steve said a couple of weeks ago that Big Red, the most reticent of the them, rushed the door of the enclosure when he went in to give them their scratch trying to get at the succulent grass and weeds.  So it was time to get the chicken tractor made.  The problem was, I didn't want to spend any money building it.

The trickiest part was the joints. Steve pulled down a couple of painted 2X2's from the overhead in the garage for me, and coupled with another used 2X2 I had on the floor, I had plenty of lumber.  But I didn't have any hardware for holding them together.  So I made some.  My dad used to make his own hardware when he couldn't find what he wanted, so I guess the apple doesn't fall far from the tree. 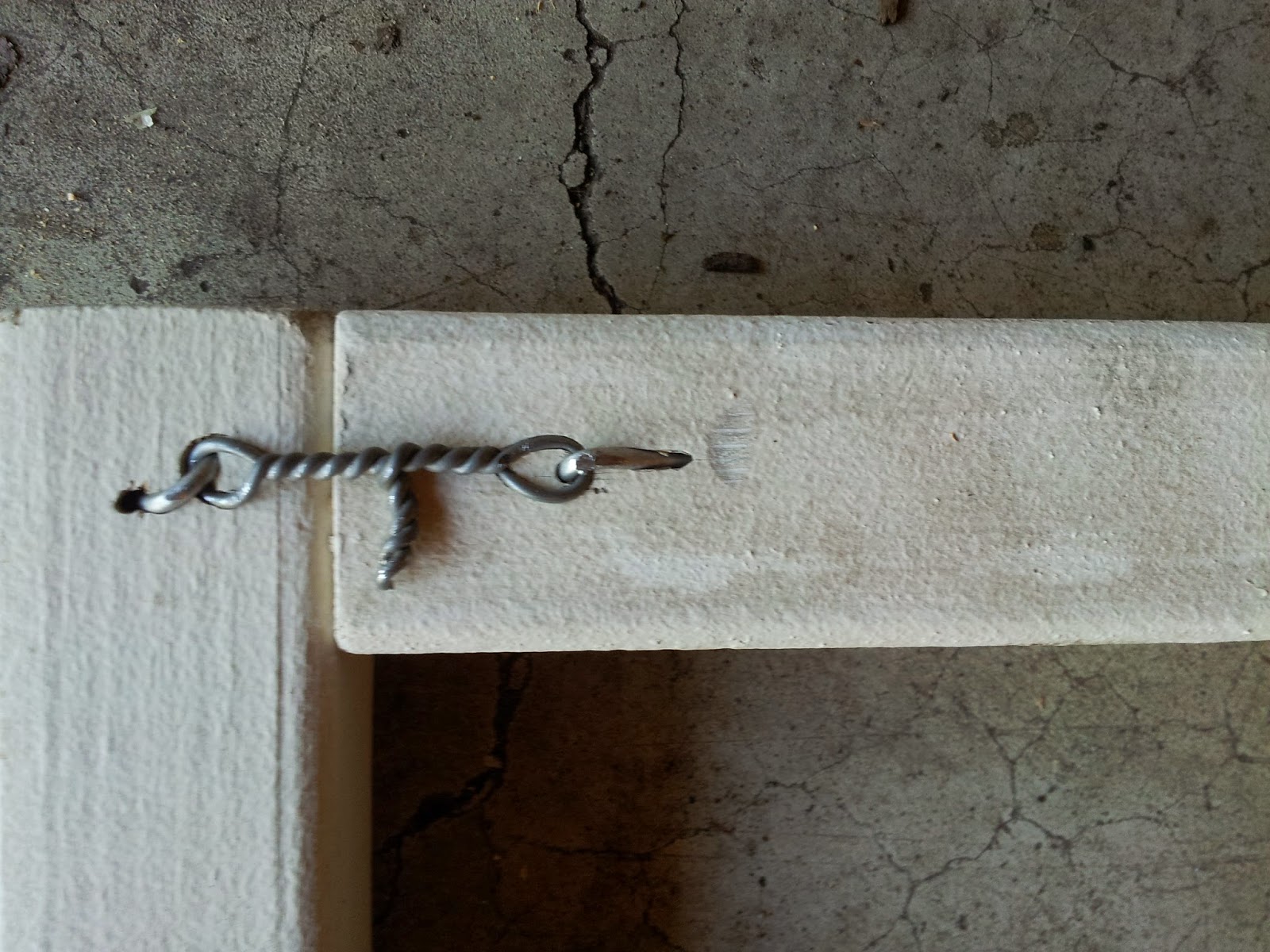 After drilling pilot holes in the 2X2's so I wouldn't split them when I nailed them, and then nailing in the biggest nails I own, I fashioned cleats from wire and nailed the joints together with fence staples. 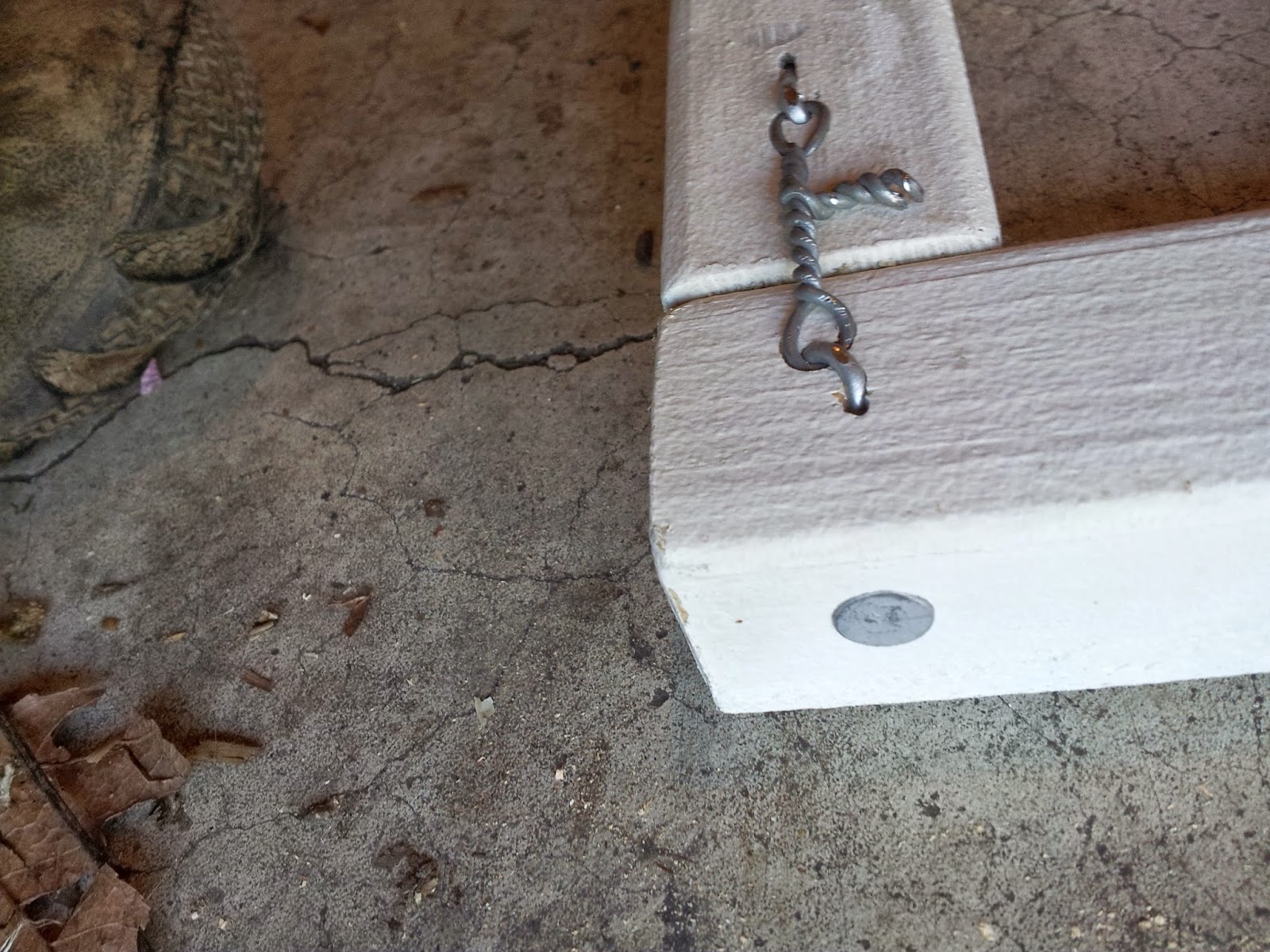 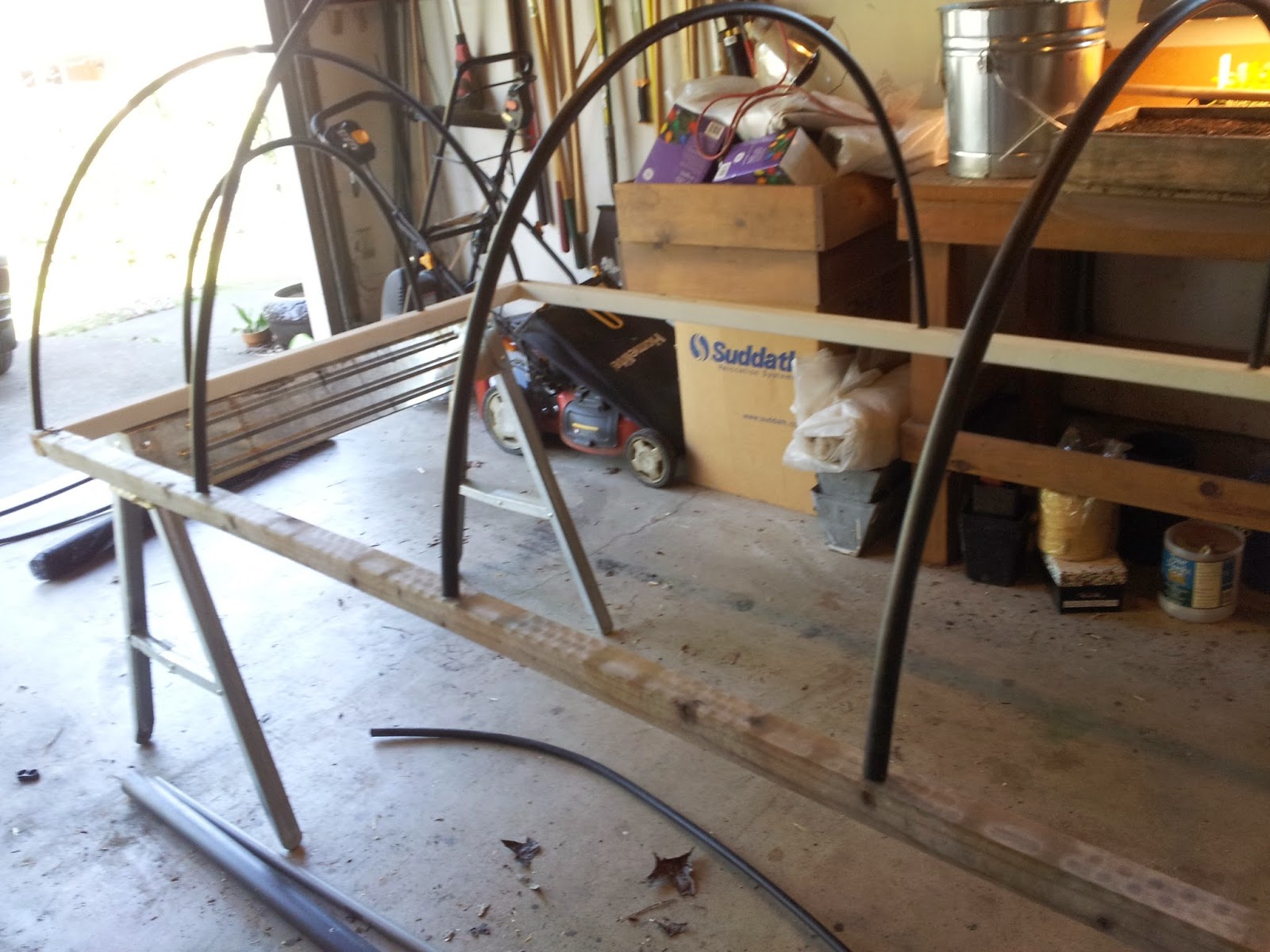 Then for the ribs I drilled short pilot holes for more of those giant nails at the corners and every nineteen inches, and then looped funny pipe over them. 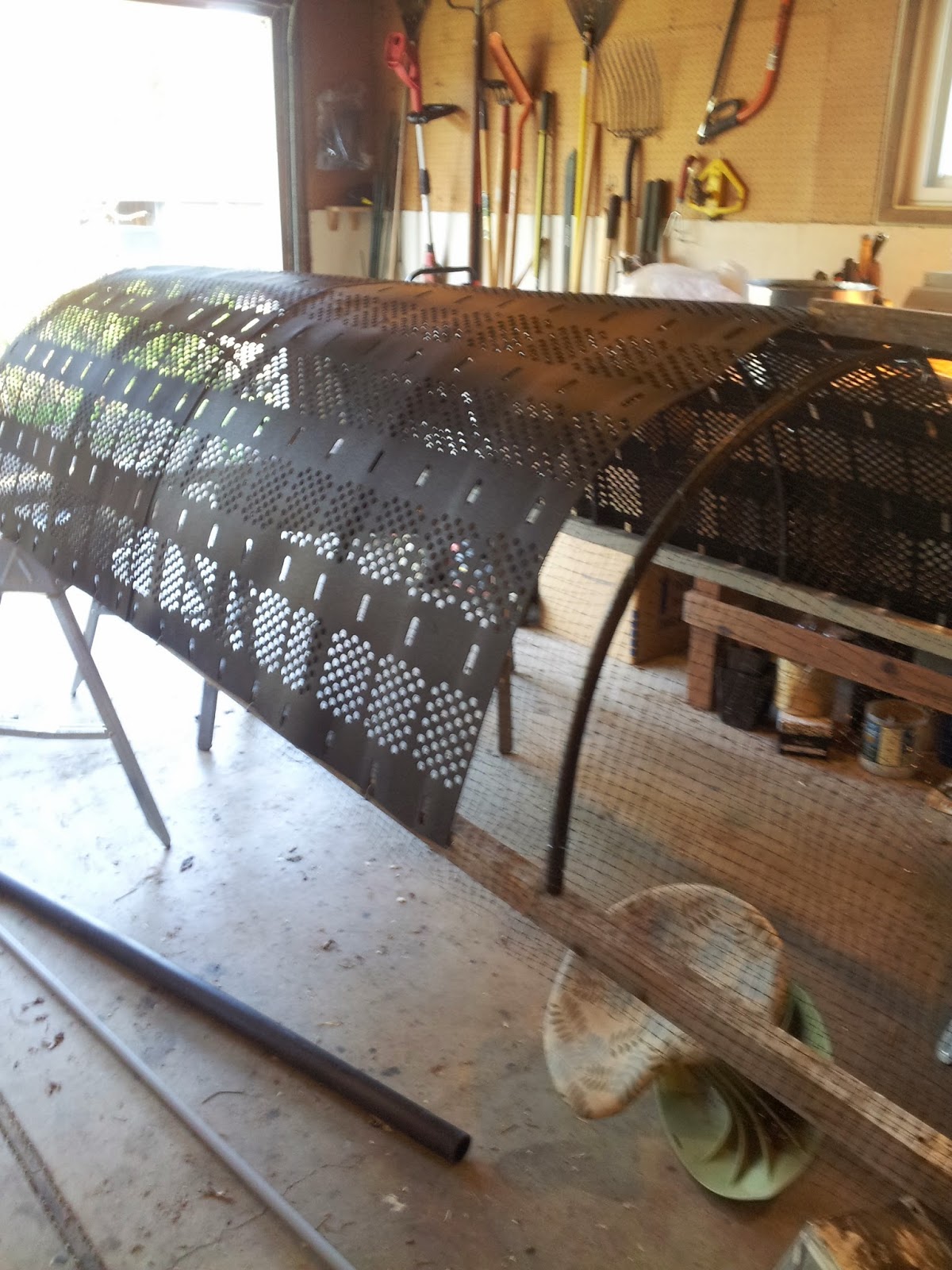 Then I covered the whole top in two thicknesses of bird netting, and then covered what I could in a plastic compost bin that wasn't cutting it for me. 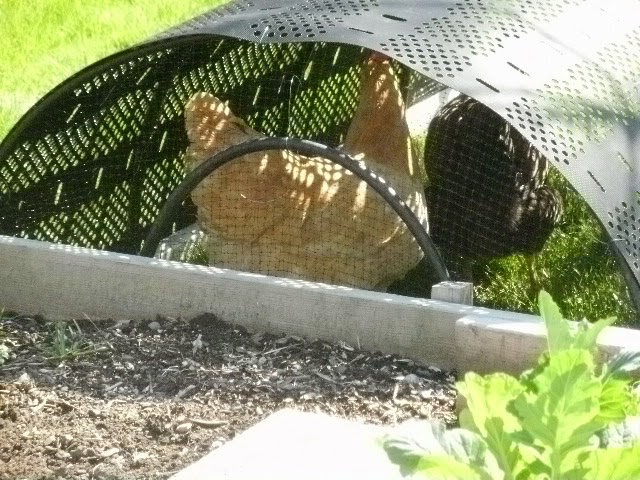 Et voila! One dee-luxe chicken tractor, to which Buffy and Big Red took right away.


Once we get some solid sunshine (which will be in mid-July. Seriously.), I'll have the girls out there supplementing their own diets with whatever they can find.  This should keep the bugs and weeds down, reduce my feed costs, and make my eggs bright yellow.

Oh- and make for some happy hens. 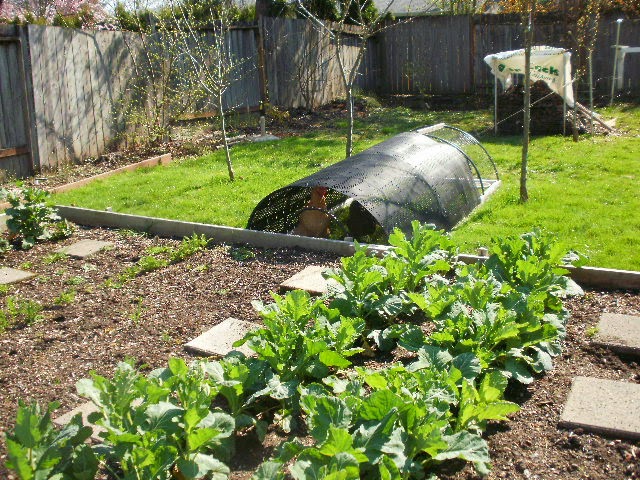 According to the very Irish priest at the last parish I attended, the Irish are more inclined to eat a Guiness-braised stew, and he made a great big batch of it every year for the St. Patrick's Day Party my church circle would throw to raise money for the church for projects like fixing the roof and what not.  I cannot for the life of me remember what his name was; I remember there was a Father Sullivan, but he was the American guy.  Then at St. Joseph's there was Father Walsh, who was also Irish, but that was a different parish. The best time to go to mass at St. Joseph's was at noon on Sunday which was Father Walsh's gig, and if you were lucky and there was a football game on at one, he would blast through the service in forty-five minutes so he could get back to the rectory in time for kick off. He earned himself the nickname Father Whoosh for that. But I digress.

What I really wanted to tell you about was what I served with this year's corned beef, because I'd forgotten about it and it's so good, I don't want to forget again.  Ever heard of Colcannon mash?

Colcannon mash is one of those dishes whose main ingredients don't sound like they should go together at all, but whose sum winds up tasting better than its two parts: potatoes and cabbage.  Except I like it better with other greens than cabbage.  One time I substituted a half bag of arugula that was threatening to go off- delish- tonight it was some mixed greens I have in the fridge.  I also tend to fry it up after mashing it, because that is the way I had it the first time.  But if you haven't tried it, you owe yourself, because it's really good.  If you can't justify it that way, think of it as a slightly lower calorie way of getting your mashed potatoes, or a sneaky but acceptable way of getting those deep greens you know you should be eating.  (By the way, I haven't tried gravy on Colcannon mash, but I bet it would be wonderful, if not entirely traditional. It would not be less fattening, however.)

And this is more just how to get it made rather than a recipe; I'm assuming that you know how to boil potatoes for mashing- just don't over boil them and get them water-logged.

Boil your normal quantity of potatoes (by which I mean whatever quantity is normal for you) in salted water until they're almost cooked.  A few minutes before they're done, throw in several handfuls of greens, and some chopped green onions.  Cook the greens until they are wilted and cooked, but still bright green.  Turn off the heat and drain the spuds and greens in a colander until they are pretty thorough drained. If you can press out some of the water from the greens, so much the better, but take care you don't mash the spuds through the colander holes.

Return the whole thing back to the pan and turn the heat back on.  Mash the whole thing with a potato masher and add a little buttermilk, sour cream, or yogurt and a pat or two of butter. Season with salt and pepper, and either serve as is or, fry up in a hot skillet in a couple of tablespoons of vegetable oil and butter.  Turn when browned and add a little more fat if you have to.   Serve it instead of the straight potatoes and cabbage with your corned beef.