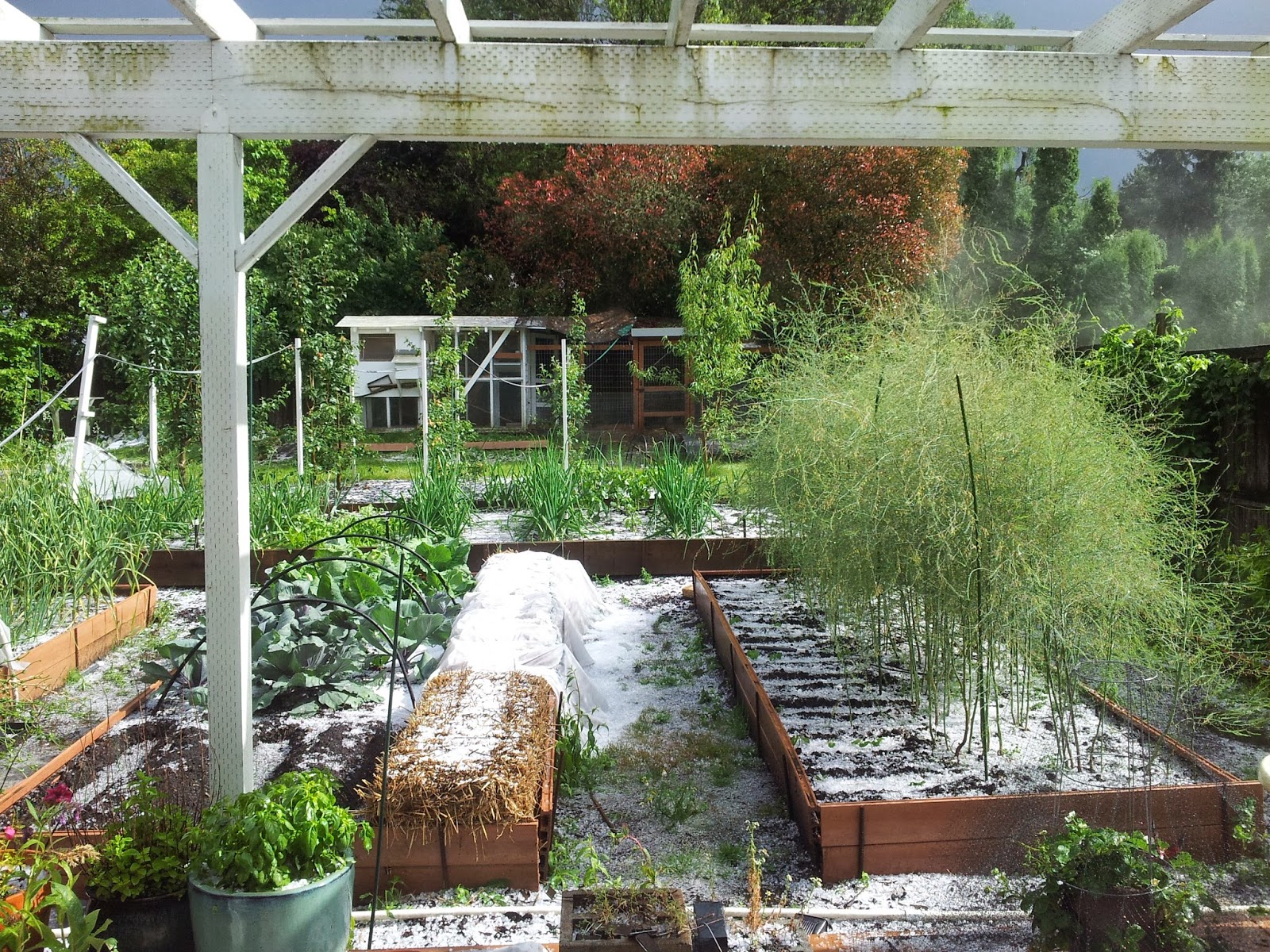 The day before yesterday, I'm in the shower, and when I turn off the water I hear this THUNDERING ROAR…it was hailing- the worst hailstorm I've ever witnessed.  It was worse than anything I'd experienced in Florida.  I've never seen so much hail come down so fast and so hard. The last time we had a bad, late hailstorm it was in May, which was bad enough, but then my plants weren't so far along.  This one happened mid-June- I dreaded what it was doing to my garden.

I finally got outside to see what kind of havoc the hail storm had wrought, and my heart sank when I saw the damage.  A few things are going to be okay- the pole beans and cucumbers, for instance, because they were sitting under their respective trellises which provided a modicum of cover.  The cabbages will probably be alright because I think enough surface area of them are unscathed.

But the mainstays of my summer garden- the tomatoes, eggplants, peppers, and kale- were pulverized.  I'd just trimmed the tomatoes to a single leader and one of them was flopped over broken.  I don't know what that means for production from that one.

Also decimated were the crops that are newer to me, the cardoons and Sweet Meat squashes.

I can't quite say everything's wrecked, but enough of it is to make me feel that it all is.  I really don't know if the tomatoes can come back from it; I'll just have to see. About a third of my sweet corn crop which I just got into the ground also was ruined.

I guess I could be seriously depressed about this, and maybe I am, because I decided to make a dessert I haven't made in a very long time-  probably not for five years.  I don't know why not- it's one of Steve's favorites and it's pretty easy to make.

If eating this doesn't cheer me up, nothing can.** Roll out and line a rectangular* tart pan with the pie crust.

Fill it with the chopped nuts and semisweet chocolate chips and set aside.

Mix together the rest of the ingredients and pour over the nuts and chocolate pieces.

* I always make this in a long rectangular tart pan and it takes 45 minutes- if all you have is round tart pan, increase the nuts and chocolate chips a little and bake it for 55 minutes to an hour.

** I'm not actually expecting this to make me feel better because I'm not an emotional eater.  Nothing encourages, or unfortunately, discourages my appetite.

Some of you may remember my post on coppicing woodlots.

(Obviously you can read up on it if you don't.)

About three or so years ago I planted some cider gums (Eucalyptus gunnerii) with the intent to coppice them.

First the bad news: one of them died.


Now the good news: it's not dead and it coppiced itself!


See all that new growth at the bottom?  Those will grow into new tree trunks.  I'll let them get a little larger, and probably some time this summer I'll drop the dead portion of the tree across the neighbor's lawn, taking much care to miss his apple trees and pick a day he's out with his truck so it's not in the way.  I'll cut the deadfall into short sections, probably ten inches or less, and stack that for fire wood. Then I'll thin the smaller shoots out and leave the sturdier ones to grow, and cage the whole thing so that weed whacking won't thwart my efforts.  Once they're as tall as the cage, I'll remove the cage.

Eucalyptus is very, very hard, and makes great firewood- it doesn't usually figure in lists for best woods for firewood because most of those lists are European or American in origin.  But growing up we had eucalyptus in the back yard, and the prunings were sectioned and kept for firewood because dry, it's a very hard wood.  I have to admit that I'm thrilled to see it coppice the way I'd anticipated it would.

This won't replace buying firewood for our suburban lot, but it will help.  Maybe a lot!
Posted by Paula at 5:57 PM No comments:

Get Rid of It

So much has happened recently, I don't know where to start.  Oh yes I do.

I finally had it up to here with my boss and quit my toxic job, so I'm updating my resume and looking for work again. Fortunately for me, work made an exception and cashed out my two weeks vacation, which ends this Friday.

But last weekend, we went to the Mother Earth News Fair in Puyallup, Washington, and again, we learned a ton. So much so that I haven't finished transcribing notes.  There were two talks that really influenced me- one was on the benefits and how-to's of living tiny, and the other was on improving soils. I'll get back to the soils later* but first I want to give you a little info on downsizing, to which Steve and I had previously agreed, but so far I've done nothing about.

First, I have to admit that I'm a pack rat.  Not a hoarder, per se, but my pack-ratting habits could easily descend into hoarding. I have all kinds of things squirreled away 'just in case', so the very notion of going through everything and making a decision about it is daunting.

The best start to the process of downsizing is using the 365 Day rule: if you haven't used it in a year, get rid of it. I have to use my own rule in this instance because, where the speaker had rock-climbing gear he hadn't used in a year and probably wouldn't again because he got it in college and now he's forty-one and unlikely to climb rocks again, I have a sewing machine that I probably haven't used in a year, but definitely need to hang on to because I have future projects that will need it, plus it's a good tool. I hang on to good tools.  But I could probably get rid of some of the fabric I've been hoarding for a while.  I don't see much point to ridding myself of my knitting supplies because they don't take up that much room and they're necessary for a particularly productive hobby, but I could probably rid myself of the art supplies I'll never use again.

And then there are the books. Books are much harder to go through, and I've already done it once, but yes, I need to do it again.  I'm keeping all my homesteading books, and I'll keep my complete Jane Austen, but I think it's time to pass on my children's book collection. Which brings me to one of the more important tenets about letting go of stuff.

One of the children's books I'll jettison is my Tasha Tudor Book of Fairy Tales which I received for my seventh birthday.  Like the velveteen rabbit, the book's condition will attest to how much I love it, which is why I still have it at the tender age of fifty-four.  Never mind 365 days; I haven't cracked it open in 365 months, which is a little over thirty years, so why do I still have it?  Because I spent many happy hours with it?

The thing to recognize with the sentimental stuff you can't let go of is that the memories they hold are not really held within them; they're held within you.  Getting rid of that book will not get rid of the memories- those will stay with me until the Alzheimer's hits, and if that happens, the book will not help anyway. So out it goes. 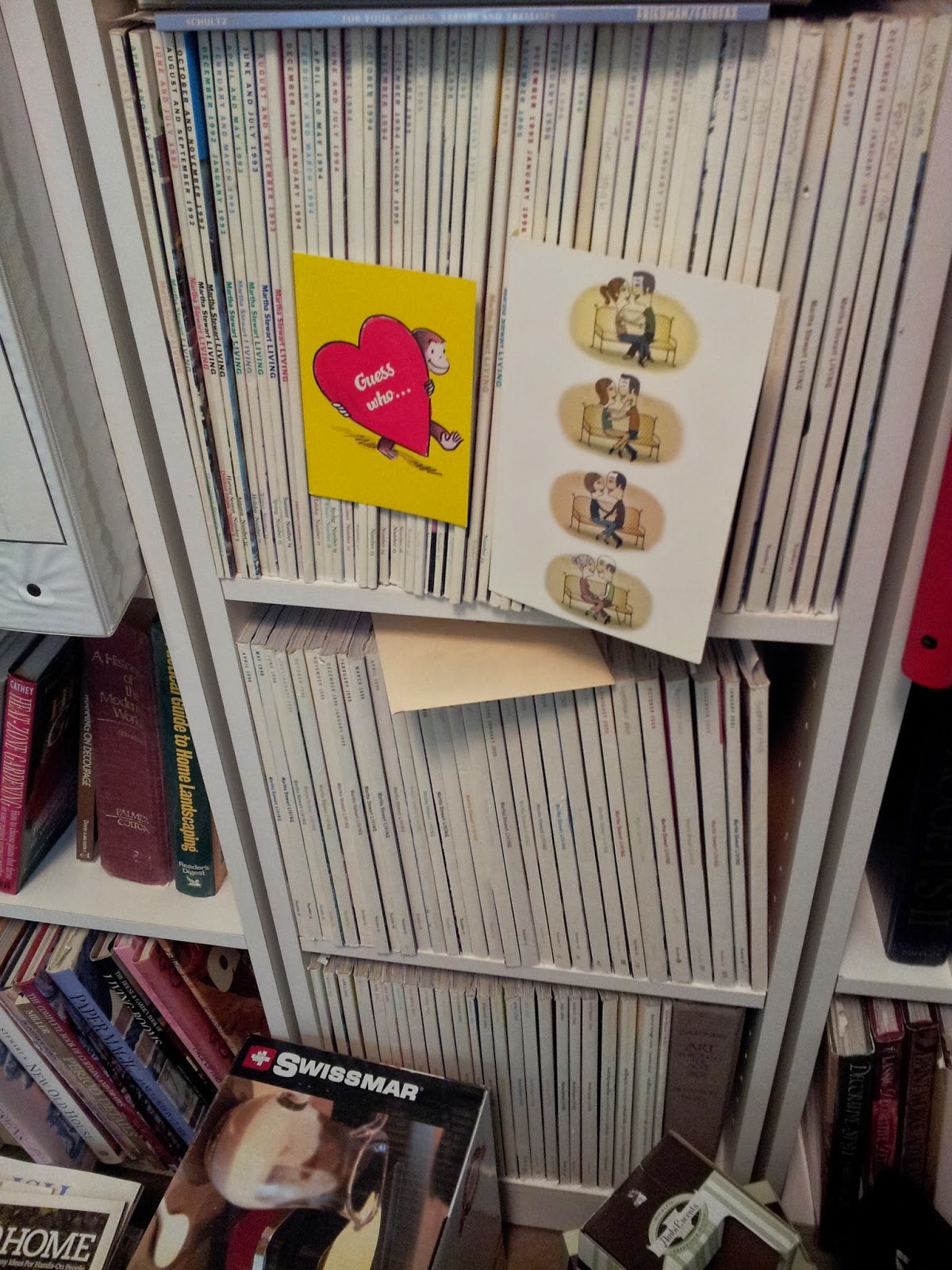 Getting rid of my ten years (Feb 1992 - Dec 2002) of Martha Stewart Living magazines complete with index is not going to be so easy though....