Book Review: An Everlasting Meal - Cooking with Economy and Grace

We all know how cheap frugal I am, so when I tell you I've found a book to buy, you'll appreciate that I think it's worth the money.

Tamar Adler is someone I'd like to meet and talk with someday. Like me, she loves food and words, and her writing reflects that. In An Everlasting Meal - Cooking with Economy and Grace which I happily stumbled upon at the library (always borrow it first if you can), Adler blends ideas and instruction with a bit of philosophy, all crafted with a remarkable gift for turning a phrase.
Regarding beans she writes: "Beyond the indelible stain the poor little things will never shake, the distaste we feel for beans in not unfounded either. Our beans are rarely as good as they can be.  They're usually so bad, in fact, that basing an opinion of their merits on prior experience is very much like deciding you don't like Bach after hearing the Goldberg Variations played on kazoo."  Which is really apt, considering we're talking about beans.  She delicately then goes on to say: "Once the sun has set and risen, drain the beans through a colander and cover them by two inches with fresh, cold water.  What gets flushed out of the beans on their overnight wallow is what inspires musicality in eaters.  Feed their soaking water to your plants, who will digest it more quietly, if you like."  I also likes how she deals with cooking times and the importance of letting things take as long as it needs to to taste good: "If a soup seems thin, let it go on cooking. If tomato sauce still tastes acidic, give everyone a bowl of olives and a stern look and cook the sauce until it mellows out."

Even her chapter titles are clever: How to Teach an Egg to Fly covers, naturally, eggs; How to Catch Your Tail deals with not wasting anything in the kitchen, and the last chapter, How to Snatch Victory from the Jaws of Defeat tells how to save a ruined meal or ingredient (and who hasn't had one of those!).   There are few actual recipes in the book, which is a good thing, because most of it is the kind of instruction which leads you to eventually be able to intuit what you need to do to cook and save well.

There was only one place in the book where I disagreed with her despite her phrasing, and that was the subject of some vegetables tasting better pickled than they do fresh: "If creation had had any pretensions of being perfect, okra and green beans would have both grown from seed to fruit full of vinegar and salt."  I think that's highly personal take on their merits, because I would much rather mow my way through a bowl of fried okra than I would popcorn, and French filet beans with a little butter, garlic and lemon juice, or bacon, spaetzle, butter, and Penzey's Bavarian Seasoning are marvelous revelations for one's mouth to get around.

All that aside though, the book would be useful for any scratch cook who cooks from scratch not only for the fun of it but also because of the economy of it.  For anyone trying to get more out of less and live well in the process, having An Everlasting Meal to refer to would be like being able to ask someone whose cooking you admire for their instruction and advice anytime you like.

I'm going to buy a copy, and that's the best recommendation I can make for any book I've borrowed.
Posted by Paula at 11:00 AM No comments:

What with planting a cucumber called Marketmore, not thinning them out (I've had trouble with cucurbits this summer and didn't dare), and the generosity of (someone else's!) bees, we are up to our eyebrows in cucumbers this summer.  I still have a large colander full of cukes in various stages of growth on the table and have been making salads with the better ones and chopping the not so great ones into hunks for the girls, who think they've died and gone to heaven when I toss them into Hensdeep for them.

But since picking that veritable shit load, I've gotten wise to cucumbers: pick them when they are still tiny and make cornichons from them.  Sometimes, I'm not so on top of things in the cucumber department (I'm also picking and processing green beans and zucchini as well) and run across pickle-sized cucumbers, which get picked and turned into regular pickles.

All my recipes are coming from The Joy of Pickling by Linda Ziedrich, a terrific book I've mentioned here and here. 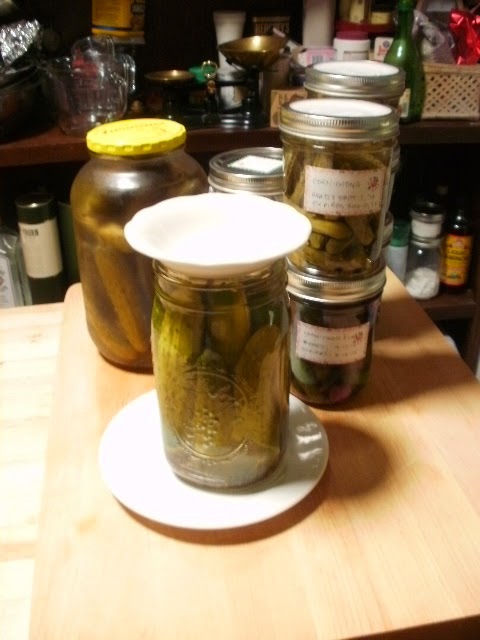 Clockwise from the top left are: Lower East Side Full Sour Dills, Cornichons A Cru, and Hungarian Summer Pickles, By The Quart.

The green beans I'm processing are the lovely French filet beans that I love so much.  This year, I grew 'Denver' again, and trialed 'Vanguard' from Franchi seeds by way of Seeds From Italy, and I have to say that the Vanguard seem to be a much better bean.  I had better germination from them and the plants are more robust and prolific, as well as started producing sooner.  Vanguard is a very good name for them and I'll be sowing this bean again.  To process, I'm blanching them for only a minute and then shocking them in ice water** before stuffing them into labeled freezer bags. Then I stuff the freezer bags into a shoe box I keep in the freezer which kind of forces then into a shape that's easier to stack.  I'm excited about my green beans this year- they are going to be lovely to eat this winter.

The zucchini is another story: I love zucchini bread and have a great recipe to share with you, but I'm not baking any this summer.  That's because I don't bake in the summer.  In fact, I don't cook in the house at all in the summer, unless we're having a freak rain storm and the predicted high is in the seventies (like today)(we had enchiladas for dinner tonight- I'm not missing that opportunity). I read in my trusty MEN* that you can shred them (the zucchini, not the enchiladas) for zucchini bread and then freeze them, and then thaw them out later at bread baking time, so I've been shredding and freezing them three and a half cups at a time, which will make three loaves of zucchini bread.  So far I've frozen enough for thirty loaves, which at three and a half cups each is a lot easier to store than baked bread. I also like to substitute some of my potato with shredded zucchini when making latkes- the secret to that is to take a handful of shredded zucchini and s-q-u-e-e-z-e the living daylights out of it (pretend it's your ex-husband or bat-shit crazy ex-girlfriend- that kind of squeezing) before mixing it with the potato, et al.  After freezing, it might be too mushy for latkes- I'll have to report back on that for you. But three and a half cups fills a quart-sized freezer bag which I then flatten out on a cookie sheet to freeze, and those get stacked in the veggie bin once they're hard.

I'll report more of what's coming out of the garden this summer- the alliums will take a whole post by themselves.

*Mother Earth News
**I've found that a very good solution to not wanting to buy ice or waste tray ice is to float a couple of large blue-ice packs in the shock water- they don't melt as fast as regular ice and I can reuse them.
Posted by Paula at 10:10 PM 1 comment: