A Birthday Wish Comes True (Sorry- It's Not For World Peace)

I find, as I get older, (and today I am one year older) that birthdays are best observed or celebrated, whichever your preference, by wonderful experiences upon which you can recall (for as long as you can); they are the gifts that truly keep on giving.

Last year for my birthday, I was given a the experience of mushrooming by a friend who had no idea that it was my birthday, and who gave me the unreserved gift of her time, freely given.  It was a great day, and a treasured memory. I asked about mushrooms this year, but the rains have been insufficient.  I hope that we can still go later in the season, when the rains have returned.  If we get a day mushrooming this autumn, that too will be a gift, and I will be grateful.

But for this year's birthday I wanted a guitar.  I've been wanting to learn to play the guitar for years and told Steve that if I don't learn to play it will be something that I will regret on my deathbed (among a thousand other things that I have also failed to do, or unhappily, have done).  But then it occurred to me: if, and when the SHTF, a guitar will not get you dinner (and I do not pretend to believe I will ever play well enough that it should); perhaps instead I'd better ask for fishing gear, which is of course what I did. Steve agreed.

I called an ex-vendor friend of mine who is an avid outdoorsman and a very nice guy to help me pick out what I'd need; the cherished notion of ever learning to fly fish giving way to the better practicality of plain old casting for lake trout being the more sensible approach to this new skill I was keen to learn won out.  I would learn to cast.  We met at the local large anglers' establishment and, mmmm, seventy-two or so dollars later I had my gear and my new pole was rigged with everything except the hook.

I have never fished before.  It was not something my own father did, and my dear grandfather passed long before I was old enough to even know how to spell fish, much less be interested in catching one.  So then, how to learn?  Ah! YouTube. Wonderful invention; it's where I learned the toe graft stitch (AKA the Kitchener stitch).  I found a video and watched raptly- this guy knew what he was talking about (and unlike so many who post to YouTube, he didn't waste time with a lot of useless talking but got right to the point- capital!).  But I wasn't getting it- I retrieved my pole and tried to mimic what I was seeing short of actually casting in the house, but, unbelievably, without even actually casting (in the house), I managed to lose the barrel swivel, leader, and lead weight somewhere between my desk and the front hall and fouled up the line.  I hadn't even cast!  I was just holding the thing and it all went pear shaped!  How the hell did I manage to do that? Obviously I needed one on one coaching and my neighbor Larry would fit the bill.

I need a favor of you, I told him last week. I want to learn how to fish; will you show me how to cast?  Of course he would, and last Thursday when he showed me how to cast and while I was practicing in the street, he and his wife Kathy and I got to talking and the next thing you know we've arranged to go on my birthday the following Sunday up to the trout farm where they take the grandkids.

So this morning while I am running around trying to put together a picnic lunch and get my own birthday cake into the oven, Kathy shows up with a bakery box.  Which she opens to reveal: 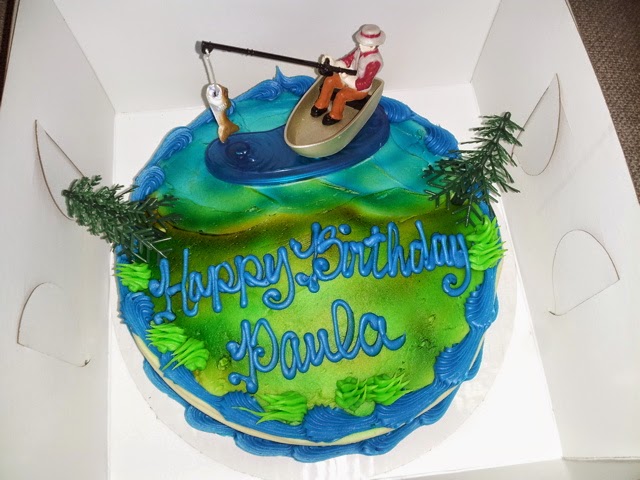 Steve takes one look and concedes, "Oh yeah. That's crazy cute." (Never heard him use that one before.)

But it was crazy cute.

I finish the picnic prep and we load up Larry's truck and drive up there. We find our spot on the pond (now, I know this isn't the macho way to fish, but you don't need a license, it being on private property, and I wanted to get some casting and, more importantly, catching experience under my belt before trying this on my own. With a license. Somewhere out where other anglers go and I can be seen fishing.  So did not want to embarrass myself) and set up in the shade.  Inexperienced as I am, even I know you don't catch fish casting your shadow in the water.

Larry catches a fish right away: 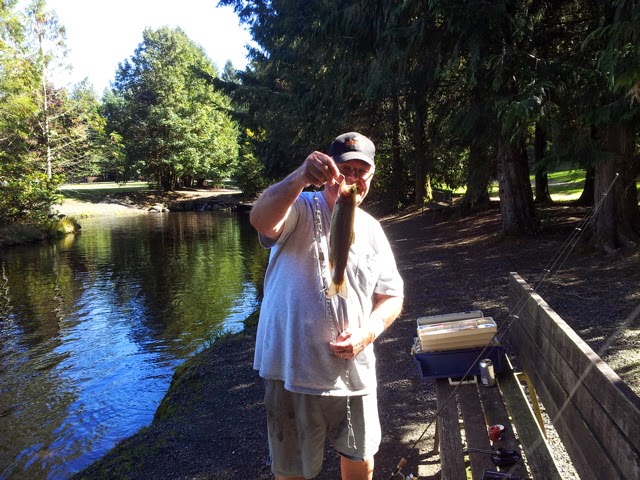 I immediately catch a couple fish, but wind up dithering on the bank, trying to re-bait my hook, although at this point I think I've lost my hook and I'm retying on another, hence the intense concentration (and my reading glasses): 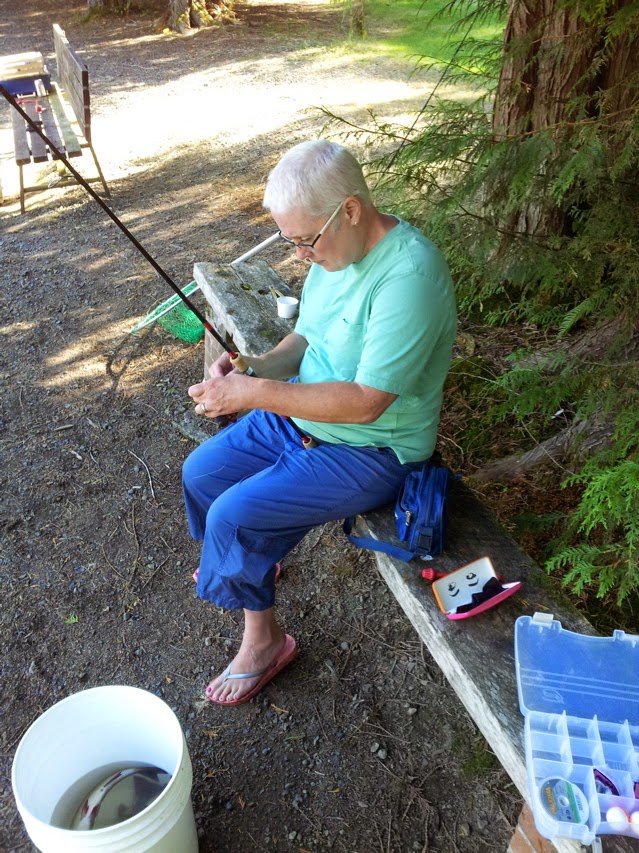 I get three fish into the bucket and hook a fourth, and I can tell, even though, you know, I've never done this before, that this guy is a little bigger than the others, never mind that I'm going to have to pay more for him; he winds up being fifteen inches long- not quite a pound, but I don't care because I'm catching fish on my birthday!

Steve hasn't caught anything yet; he's working with a live bait hook and a worm.  I've been catching fish pretty rapidly with power bait, and I want him to experience this, except that somehow, he manages to seriously foul my line.  I mean he's managed to get the line caught up way the hell up under the spindle inside the reel.  I bite the treble hook off my line and tie it on to his leader (after dispensing with his live hook) and get him all set up.  Kathy, bless her heart (and patience) takes my gear and later gets the line pulled free of the reel and gets me back to square one.  It later turns out that I'd had the free spin button turned on which was the source of all my angst.  Glad I learned that one on the little pond before embarrassing myself out in the wild.

In the meantime, true to form, the power bait wastes no time and Steve has a fish, which he reels in.  It also turns out to be fifteen inches long: 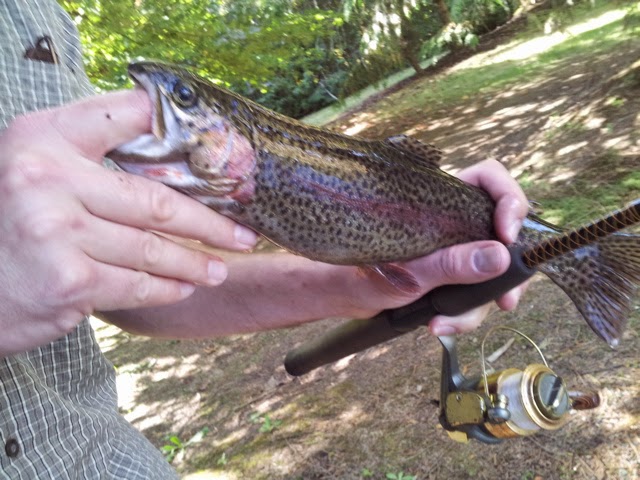 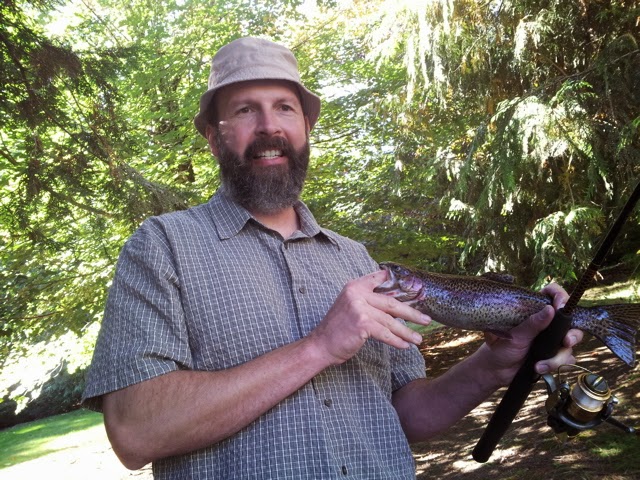 I'm a happy girl (I use that term loosely in view of the fact that I am now pushing fifty from the wrong side).

It was an awesome day.  Fish are going to learn to fear me.