Thanksgiving always distills my sense of gratitude every year- it never fails.  This year it seems I have more than ever for which to be thankful, but having Steve in my life always tops everything else.  But even if I didn't have him, I would still have more than a lot of folks.  I'm really glad that we have a day to remind us of everything that's good in our lives.

Warmest wishes to everyone for a Happy Thanksgiving!
Posted by Paula at 9:10 AM 1 comment:

Wow! If you weren't convinced before that you need to raise as much of your own food as you can, maybe this story will convince you.  And here is the PBS original story.
Posted by Paula at 12:19 PM No comments:

Steve and I have been making pizzas at home for a long time, and we're pretty good at it, but we still hadn't nailed down the crust yet.  We've been using a pizza stone for a long time and have tried it in all the positions in the oven; from the bottom to the top and everything in between.  We've tried different temperatures, different baking duration, different recipes, different amounts of water in the recipe we like, topping the pizza with cheese before putting it in the oven, baking the crust with the sauce for a few minutes, and then topping it with cheese, etc.  The crust would come out either too underdone for the bottom to be crunchy, or it would come out like hard tack- it was never just right. Until last Friday.

I read about pizza steels on SeriousEats.com, but they are really spendy.  Then somehow, and I can't remember how, I wound up on Amazon looking at Lodge cast iron, and found they make a pizza pan. And their pizza pan had great reviews.  Out of 764 reviews, 694 were five stars. I found the ones by A. Stribling and S. Peterson (their reviews are near the top) were the most fun and useful, and didn't read much more.   That, and the high number of five star reviews was enough for me, so I went ahead and ordered one.

However, when it showed up, it had the same problem all new cast iron has anymore, enameled cast iron excepted; it has a really pebbly cooking surface.  I have a really old Wagner pan that I've had since my late teens that has a very smooth cooking surface, which is really non-stick.  When Steve and I got our wood stove, his sister gave us a small cast iron frying pan for Christmas that would fit on the wood stove.  I haven't really used it because it too, had a pebbly surface.  Then I found out that you can sand cast iron and smooth some of that out.  Who knew?

So I attacked both pans with sandpaper- first 80 grit, then 150, and then 220.  I also did this on the stove with the hood fan running full blast, because inhaling that stuff would give a new meaning to iron lung.

This is the small frying pan: 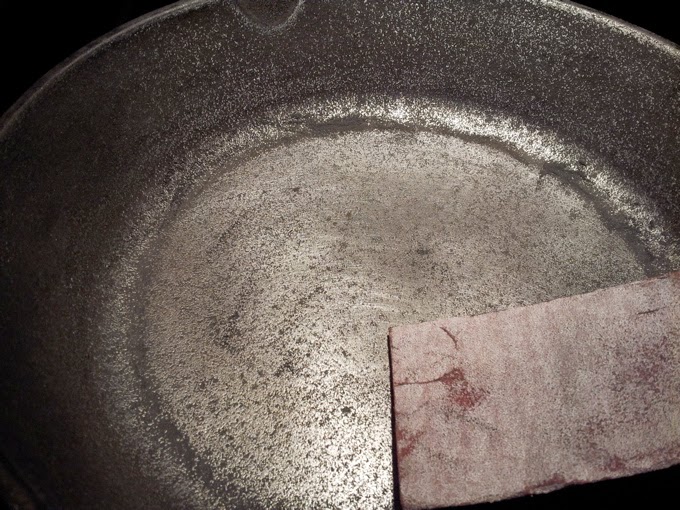 You can see what I mean about pebbly; in this picture I only took off the top of the surface on the sides of the pan because I didn't feel like wasting time on a surface that will only occasionally get food on it.  All the action really occurs on the bottom of the pan: 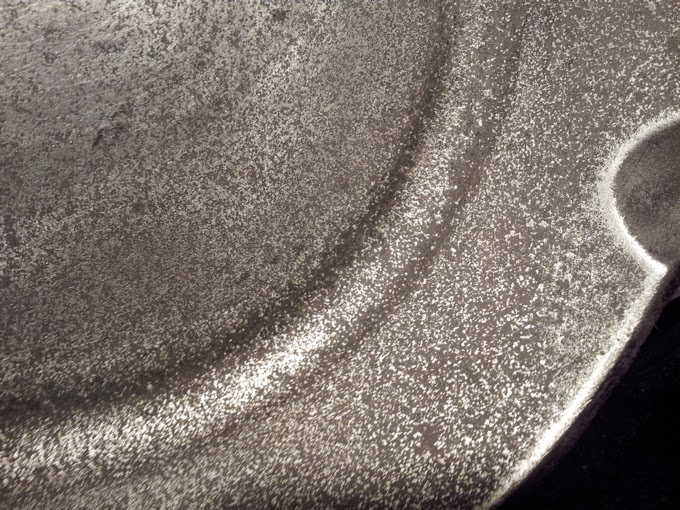 Even after sanding most of the high spots off the pizza pan, you can still see the low spots that were left. That's okay, because it would really take a long time and a lot of iron off the pan, and besides I know the best way to season cast iron, because after all this sanding, I was going to need to do that anyway: 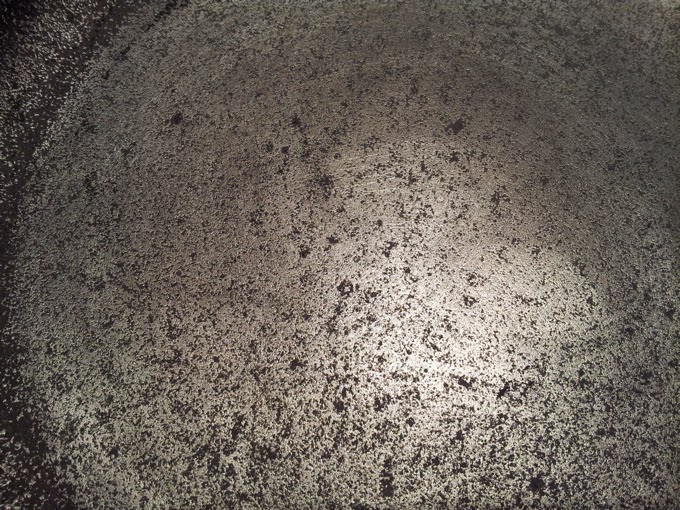 The absolute best oil to use for seasoning a new cast iron pan is flax seed oil.  I learned it here, and I'll let her explain why it works, but I will say that it does do a great job.  It will also let you heat your pan to the 500F you need for baking a pizza.  700F is better, but I don't have a brick pizza oven, so I have to settle for what my ovens will give me, and 525F is the top end on one of them.

This crust was the closest we've ever come to pizzeria pizza- crunchy on the bottom as well as on top, but nice and soft and thoroughly cooked all the way through: 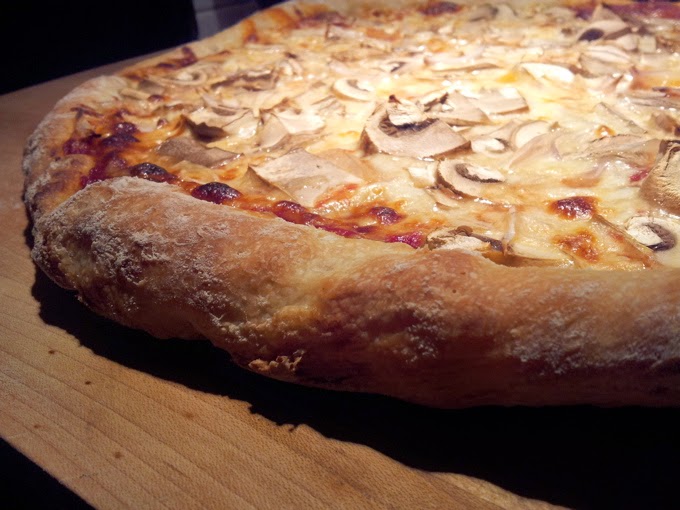 This works because cast iron, while being a lousy conductor of heat, holds on to what heat it gets for a long time.  Some folks have tested it and found that outside of the exact spot where the burner on your stove is, the rest of a cast iron pan doesn't really get as hot as the part over the burner, and you can test this yourself on any of your pans by spreading flour evenly over the cooking surface and cranking the hell out of the burners.  In fact, after a late turn on the seasoning, I turned off the oven and left the pans in the oven, and they were still warm when I got up the next morning six hours later.  At any rate, in the oven, getting blasted by heat from all directions, cast iron heats up pretty well and stays hot for a long time, so if you preheat it well before putting your dough on it, it will start baking the bottom of the crust while you are still topping your pizza.  And you don't have to leave the whole pizza in the oven for a really long time, drying out the crust and burning the cheese just trying to get the center of your crust baked through.

I love this pan! 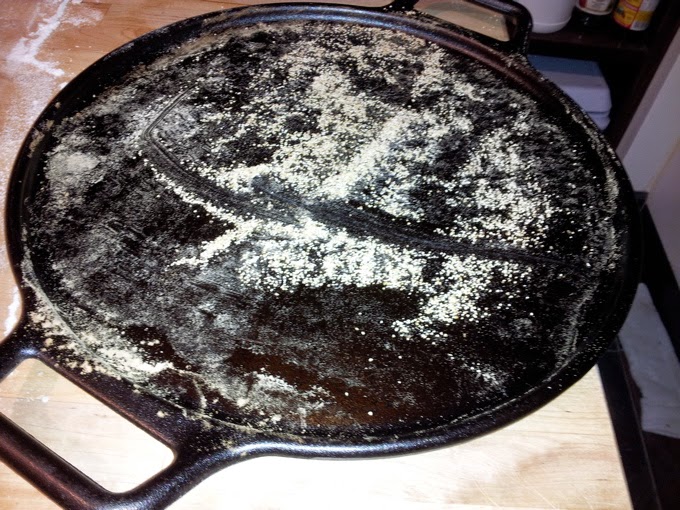 Sometime last summer I learned about Kouign Amann (pronounced Queen A-mahn, but if you remember your high school French you'll recall that the three letters o, u, and i, together as in oui, are actually pronounced 'ooh-wee' really fast, so it would be koo-ween a-mahn and the koo-ween would roughly come out Queen), which is a French pastry from the Brittany region of France.  It sounded pretty wonderful, so naturally I forwarded several online recipes to Steve to choose from.  We have this deal: he makes the dough and I finish the item- soft pretzels excluded).  We set one aside to wait for the weather to cool down as we don't like to bake in the house during the summer.

Then a few weeks ago when we had to go into Portland after brewables, we stopped at a bakery that had Kouign Amann (after having scoured the city bakery menus online to find out who did them).  We got the last two they had, and they were just okay- not shaped as expected and really greasy and not terribly buttery.

This past Saturday we finally got around to baking them for ourselves. The recipe came from here, and as promised, it was pretty easy, and didn't take too long.  It does help to start the night before, and finish up the morning you want to eat them.  We had them for breakfast, and then again for dessert with a scoop of vanilla ice cream on them.  They were way, way better then the ones we got from the bakery.

And in case you're wondering, I started my diet yesterday. 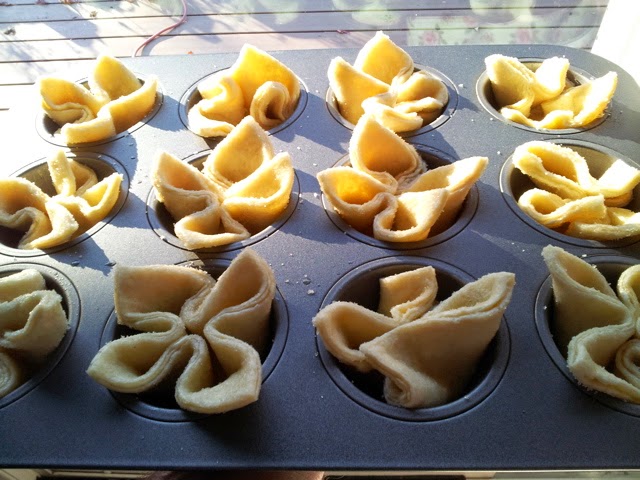 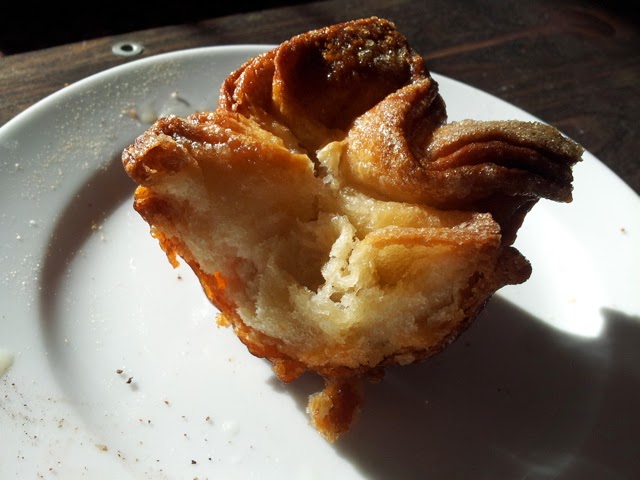 Will There Be Gravy?

This was an oft-repeated question of Steve's over the course of our marriage, which, coincidently, will be thirteen years old tomorrow.  He usually asked this about things for which there certainly could be gravy, but generally did not lend themselves to gravy, such as baked chicken, or maybe pork chops.  Honestly, there was a while there when I thought he thought that gravy just happened, like spontaneous combustion.  Clearly, he had no clue what good gravy required, and that would be pan drippings.  The problem was, I'd learned to bake chicken in a glass baking dish, and the drippings usually got thrown out.   But then it dawned on me, and you probably figured this one out long ago: bake the chicken in a frying pan, remove it to a platter to keep warm, and make gravy with whatever's in the pan!

So that's what I do: the chicken parts (thighs, usually) get baked and removed to a platter to keep warm, and then I add whatever amount of flour the pan looks like it needs to make a good roux.  Then I add stock (if I have it) or more likely, water and chicken bouillon and herbs (thyme and marjoram) and fresh ground nutmeg and pepper.  The gravy gets to simmer for a little while to thoroughly cook the flour in the roux and thicken somewhat.  Tonight I poached the carrots in the gravy to impart a little flavor and color to it and the carrots were divine. The gravy wasn't too bad either.

Since starting this method anytime I announce that I'm going to bake chicken for dinner, Steve no longer asks the question.  He knows.