I don't usually get political, especially here, but something is going on in congress that has me pretty riled up.  I don't know about you, but I really, really want to see our food labeled whether or not it's GMO.  Some folks don't believe that genetically engineered foods are harmful and I can't say for a fact that they are; I just don't think they've been around long enough for us to know  the long term effects and I would like to be able to choose not to eat them because I quite frankly don't want to take the risk.  I don't want to ban them altogether; I just want to be able to make an informed choice.

Yesterday, Monsanto’s favorite congressman, Mike Pompeo of Kansas, introduced H.R. 1599 a.k.a. the DARK Act, a bill that would outlaw any federal or state law to require labels on genetically engineered food. Even states that have already passed labeling laws would be prohibited from enforcing them.With Republicans in control of both houses of Congress and anti-labeling lobbying expenditures at an all-time high, the threat to the GMO labeling movement has never been more serious.We need phones on Capitol Hill to be ringing off the hook with the message that Americans OPPOSE the DARK Act (H.R. 1599) and SUPPORT the Genetically Engineered Food Right-to-Know Act (H.R. 913).
This bill may as well be called the Monsanto Profit Protection Act, because it was written for one reason: To protect the corporate profits of big pesticide and junk food companies at the expense of our right to know what’s in our food.If H.R. 1599 is passed, it could set the GMO labeling movement back decades. There has never been a more important time to stand up to Monsanto and their allies with a call your representative right now:Dial 1-877-796-1949 right now and you’ll be automatically connected with your Representative in Washington.Please spread this information to as many people as you think will participate.

Not wasting daylight is one thing, but managing your time so that it's maxed out does not leave wiggle room for when something goes horribly wrong. 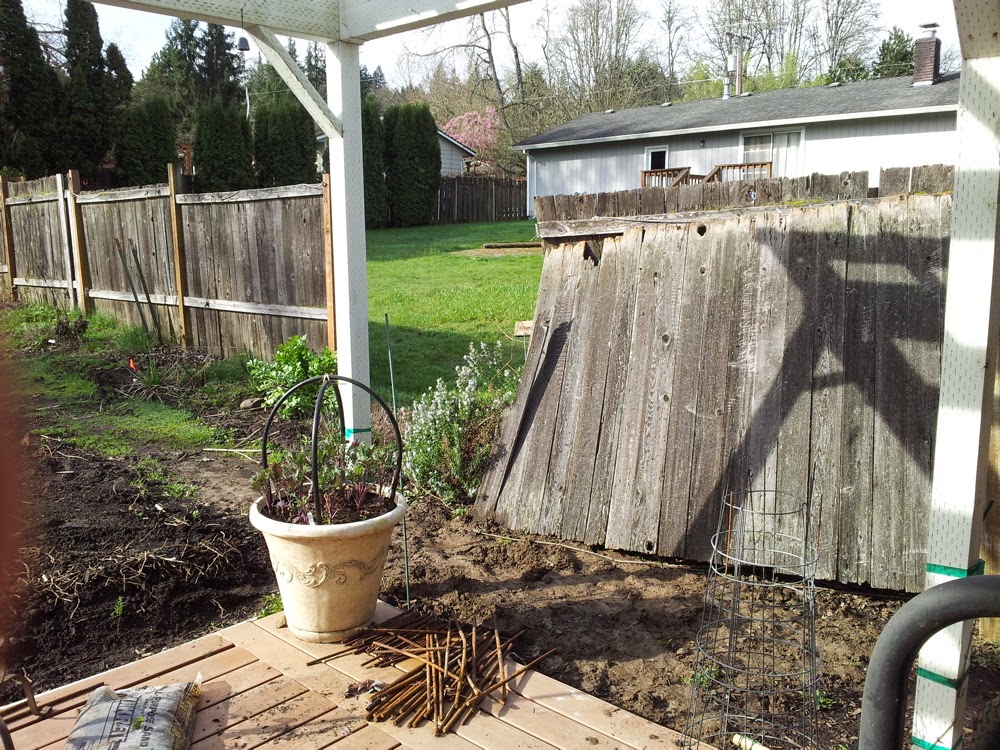 Everything I've been planning since January is all coming to a head at the same time, which would be bad enough, but to make matters a little more urgent, last weekend part of our fence blew down, so we are having the fences on the sides of our backyard replaced because they are overdue for it.  The tough part is that while I'm still getting bids (get this- the first one was $7600!), the fence area is right where I was going to put the bee hive!  It will be an interesting and nail-biting race to see what shows up first: the bees or the fence crew.  I really don't have another place to put them which is why I chose that spot. Nuts!

In January I broke down and ordered said bee package, which is due to arrive sometime in April, which means I had to have the new hive finished by the end of March. I got that done and I also built one for my SIL, and have parts cuts for a second of my own in case the girls swarm this summer, but I'm getting ahead of myself.  I still need to make sure they don't swarm immediately and take off three days after installation like the last time. 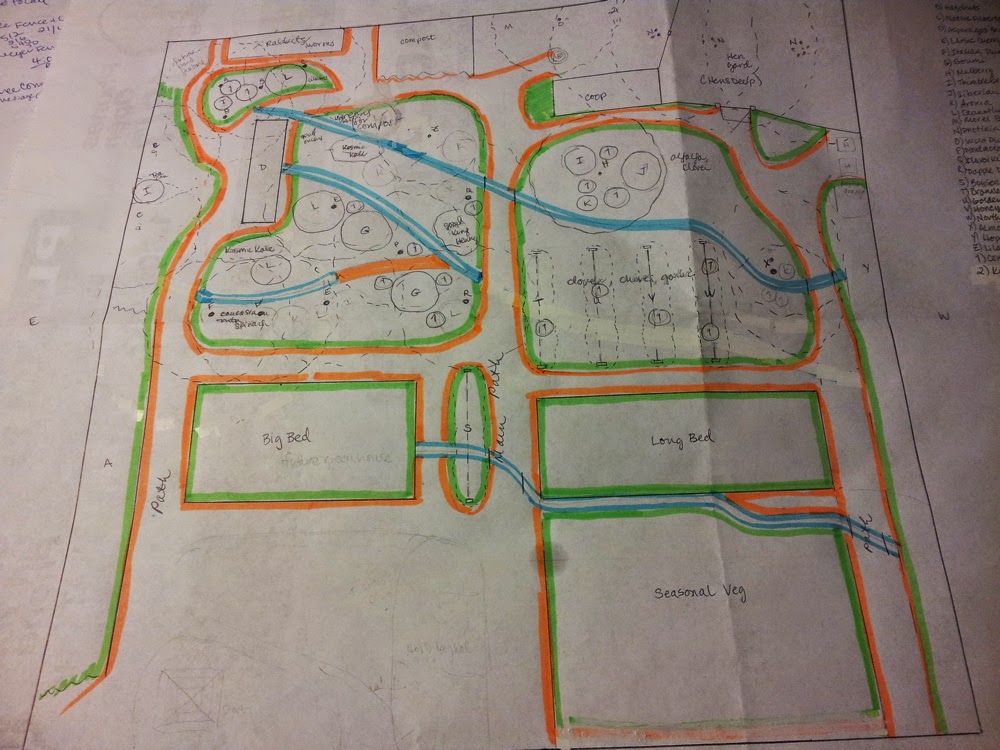 Also in January I started researching perma-culture, kind of by accident. When I first started the garden I had the opportunity to plan it with permaculture in mind but I didn't because I was impatient to get the garden started.  So now I'm planning around established trees and boxed beds, and it is not easy.  In this drawing, which you can see better if you click on it, the established trees are represented by dashed or dotted lines, and the plants I'm going to put in are represented by solid lines. (I'll write a separate post on what I'm planting and why when I get to them.) 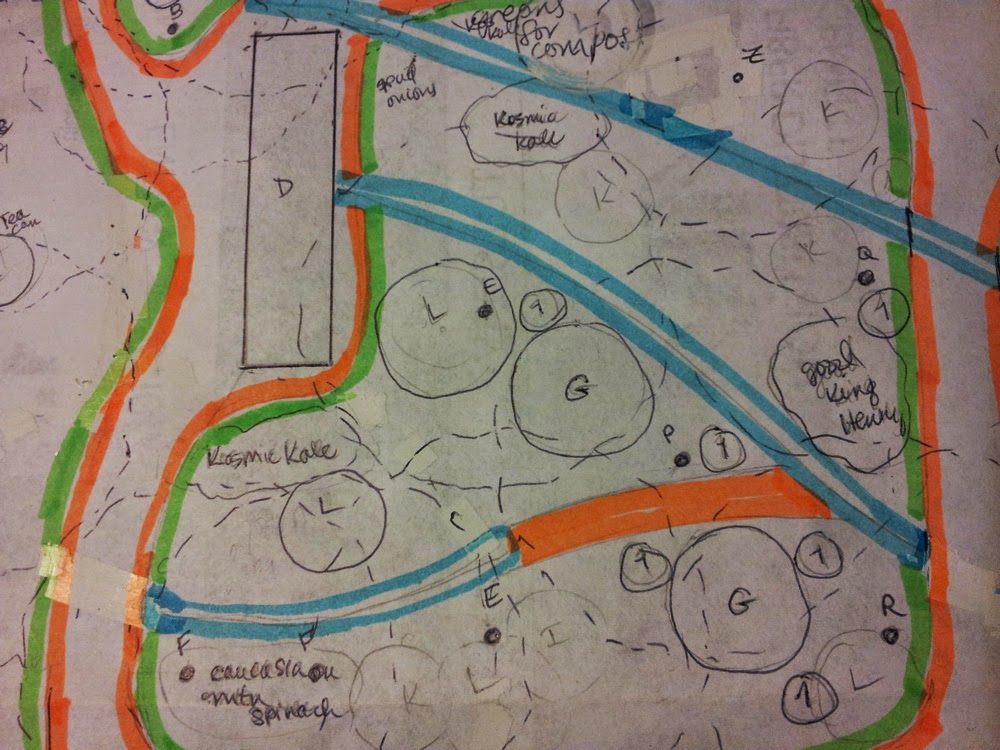 This is a detail of the food forest that I'll be creating from the stone fruits orchard.  It will be pretty crowded in there, but the swales (represented by the blue lines)  and access path (represented by by the solid orange line) will allow decent access into it. Most of the plants going in will be either nitrogen-fixing or biomass-generating, which means they'll be support plants for the trees that are there.  This, by the way, is known as guild planting, but more on that later as well.

I am by no means doing this in the right order; permaculture is all about the planning and designing, because the idea is to mimic nature's systems.  For instance, I haven't completely finished the plan because I still need to size the cistern tanks, which are getting put off again because I have to buy fences this spring. Nuts!)  Thus, the area in front of the pergola hasn't been finalized, however, I do know that the clothesline will be there (because it already is and has been for a couple of years), and I'll also install a keyhole bed for the herbs there as well, rather than the standard permaculture herb spiral, which I do not like.  I don't like herb spirals because they require too much soil to build and way too much bending over to get at the herbs in the middle.  So because the rain catchment system isn't in, I don't have the irrigation planned, which really should go in before the plants.  The plants, by the way, are cooling their jets in the garage in buckets of damp pine shavings because I already ordered them, and I already ordered them because I need to get them in as bare roots.  And I can't get them in until we finish..... 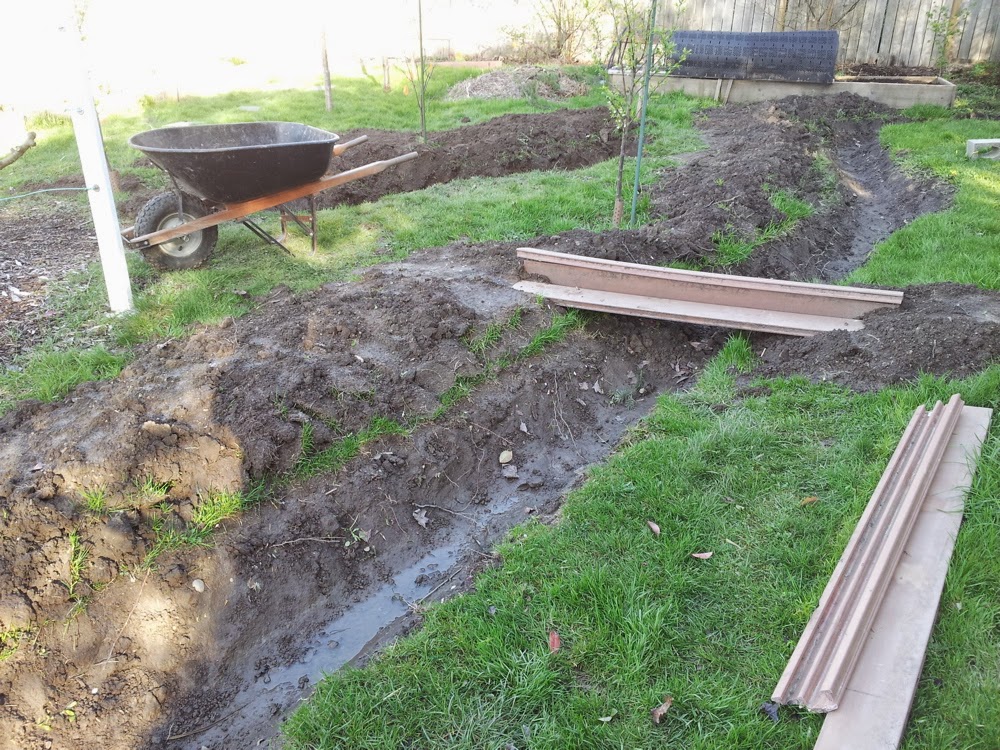 ...digging swales. Swales, nitrogen fixing plants, and chop and drop biomass plants are the three keys to permaculture success.  Swales slow the progress of rain draining across your property by collecting it and allowing the water to infiltrate the soil.  They allow trees to water themselves by raising the water table. I am hoping that they will water the trees this summer so that I won't have to, because I'll be concentrating on the new plants.  Swales are dug 'on contour', which means that you pick an elevation and draw a line all along the same elevation, which ensures that your water gathers and infiltrates evenly.  On large properties, swales can culminate in a dammed pond, and if positioned above your crops, well, then you have a gravity-fed irrigation system.   We'll fill our swales with hemlock bark, at which point they'll also become access paths.  The swales themselves are eighteen inches wide and a foot deep, and the hemlock bark will hold a lot of water.  Before the hemlock goes in though, I have to spread agricultural gypsum in them to help open the clay so that the water will move through.   We have two more swales to dig, and then I can order the hemlock, which will also be used to cover the established paths. 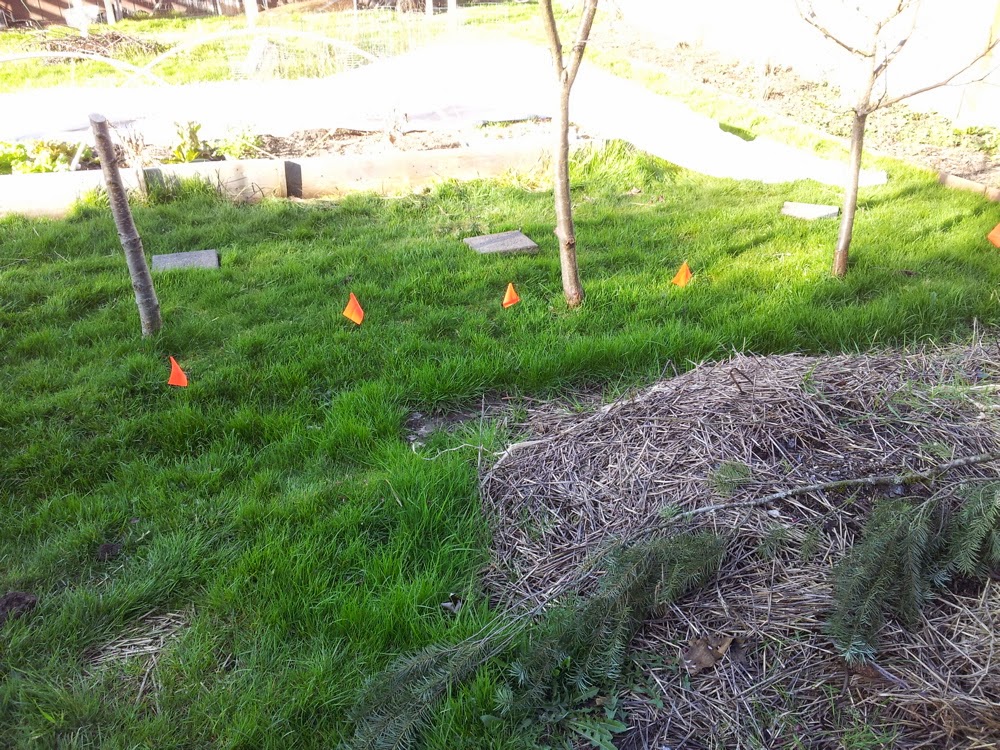 Chop and drop biomass plants create soil as they decay where they've been dropped, sometimes where there was no soil before, as in the permaculture experiments in Jordan - search 'greening the desert' and look for Geoff Lawton- his work is amazing. Nitrogen fixing plants fertilize that soil and make nitrogen available to adjacent plants.  If you have really sandy, permeable soil, permaculture is a good way to fix it.

Permaculture is becoming more popular and that's a good thing, because after seeing some of the incredible things it's done, I'm convinced that permaculture is the way to correct hydrocycles across the globe and survive and even thrive during climate change.  It doesn't happen over night, though, so start planning now if you've a mind to try it.

And plan for it to get started in the autumn like sane people do so you're not running around trying to do everything at once.