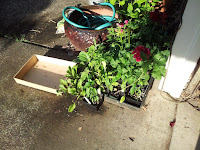 Saturday Rae and I hit the Canby Garden Show, which appeared to not have as many vendors as in years past.  This made me wonder why: did the missing vendors decide it just wasn't worth the trouble? Did they go out of business?  I missed the vendor from whom I bought peppers the year before last- I especially wanted Italian roasting peppers, but couldn't find any. But I did find eggplant, bell peppers, Serrano peppers, (which reminds me I have to find tomatillo plants- note to self), three different tomatoes for slicing, and for which I didn't pay much (I'm finally getting around to trying a Brandywine this year), and a six pack of beets.  I also grabbed a lemon verbena plant, tarragon, English thyme, sage,  anise hyssop, and a couple of flashy geraniums, just because I like flashy geraniums.  Some of this will go into the ground tomorrow, but the herbs will have to wait because the new herb bed is not ready.  Well, I mean the box is built, but it's full of construction detritus and I still need to fill it with something, probably compost.  I'm going to guess that it will take all the ready compost that I have. 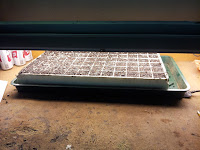 Then the other thing that got accomplished was I finally got off my duff and got some seed started.  I don't have the luxury of being able to eat just any old vegetable, so the selection is going to be limited.  That selection consists of tomatoes (for putting up), cucumbers, basil, scallions, bush green beans, French filet beans, and some more beets. Tomorrow I'll soak and then start some okra seed, which is a bit of an experiment this year.  Have I told you how much I love okra?  A neighbor in Jacksonville who grew up in the south turned me onto a wonderful dish called okra and tomatoes. You cook a mess of bacon and onions together, and then throw in a can (or jar, if you put them up yourself, you industrious thing you) and a mess of sliced okra.  Let it simmer for twenty minutes and then serve the whole thing over rice.  Delicious!  Except that I can't eat cooked onions or rice anymore.  So I've been cooking with garlic as the stand in for onions, and serving it over cauliflower rice.  The last time I made it I browned a couple of Italian sausages with the bacon, which I fished out, and then after I got the okra and tomatoes in, I laid the sausages on top of the whole thing to cook with the rest of it.  And I served the whole thing on grits. That was also pretty wonderful; I didn't know I could make it better, but those sausages went a long way in that department. Another okra dish that I love is fried okra.  I would rather snack on fried okra than popcorn any day.  So anyway, the okra plants will be an experiment, as I said.  They need some pretty consistent and serious heat, which we don't always have in the Pacific Northwest, but I bought the seed from Territorial Seed, which is in Cottage Grove, Oregon, and they said this variety did pretty well for them.

I just hope it does well for me, too!
Posted by Paula at 7:04 PM No comments: