At Last! I Managed A Fall And Winter Garden This Year!

It was really hard, but I finally did it.  I got a fall and winter garden planted this year, my most challenging gardening year to date. It's been so challenging that I broke down and bought some winter starts last week at Home Depot.

I was in there after fasteners and thought, you know? Why don't you just wander over to the nursery and see if they have any, by chance. And they did! I bought arugula, kale and pac choi starts. I'd have purchased lettuces starts as well, but they were a little old.

When it comes to growing for the winter months, when they tell you to start in mid-July, well for some things, they really do mean mid-July.  So that's what I did. This summer was also one of our hotter summers, so there was that challenge. How do you keep cool weather crop seedlings cool in the hottest part of the year?

When I built the beds in late spring, I included frames around the tops with the intention of covering them in greenhouse plastic for the winter.  It turned out the frames were also a great support for laying reed fencing across to create some dappled shade for the seedlings.  It actually worked really well, and I think the results speak for themselves. Next year I want to see about cutting down the fences so that they don't take up so much room over the pathways.

I planned one bed to be covered in plastic this winter and one bed to be exposed. Maybe next year when I have more growing space I'll be able to devote more area outside the winter beds to plants that handle frost, like kale and parsnips. But I only had so much room, and I did what I did, so we'll see how long the food lasts.  In any case, the bed that gets covered has beets and lettuce seedlings.

How long the food lasts will be the ultimate test of how well I did.  I'm hoping that by growing copious quantities of greens of various kinds, I'll be able to make the root vegetables last longer. And, I'm hoping that each of my sections has enough to last at least a month.  This is going to be very hard to do if we eat vegetables with every meal, and we do.  Fortunately, a few of the root vegetables have tops that can be eaten as well, like beets, kohlrabi, and rutabagas, so that will help.  I do not recommend eating carrot tops, no matter what that irresponsible idiot you see on the internet or TV who says you can. Carrot tops contain alkaloids and if you get enough of them you can poison yourself. Not a good idea.

We've started eating some of the greens already. I have a few more store bought vegetables in the fridge and I'm trying to put off both going back to the grocery store and harvesting stuff out of the garden.  But where I can make the store bought stuff last a little longer by helping it out with some homegrown, I am.  At some point, I'll dig up the volunteer Italian chard (actually Verde de Taglio from Franchi) and replant it in the hoop house, with the hope that it survives the transplanting. If I don't, it'll die in the first frost anyway, so I may as well try it.

If you've been struggling with getting a winter garden in, I hope my success and methods give you more hope and some solid ideas for getting around the heat in summer so that you can make it happen for yourself.

I have to say though, that finally getting one going is a really huge step for us in the quest for a year-round garden. Maybe eventually, I really will learn how to feed us from the back yard.

The Grapes Are Ripe 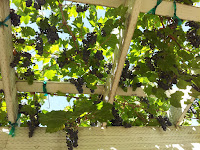 The birds were telling me for days that the grapes are ripe.  Then a week ago Thursday around midnight I was awakened by a racket on the deck. At first I wasn't so keen to get up and investigate because we have a resident skunk that uses our backyard for a thoroughfare, traversing it first by walking calmly across the deck. Actually, I'm not sure where he lives exactly, but he's intermittently regular, so I was wary that it might be him. But the racket persisted, so I grabbed my headlamp and went out there and peered up into the pergola and who do I see amid my grapes? Raccoons!! Three of them!

I quickly grabbed my critter gitter, AKA my spading fork, and start jabbing at them. A few minutes later the yard was free of raccoons and I was amped on adrenaline.  Fighting raccoons always stimulates my fight or flight response and I was absolutely jangling. So sleep was out for awhile, but it was obvious I had to get the grapes in if I was going to get any wine made this year. 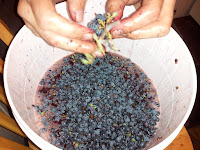 So that's what we did.  We made a quick trip into Portland the next day to get yeast and an acid test kit plus a couple other items from F. H. Steinbart, and then came home and started picking grapes.  We de-stemmed them by hand.  Don't let anyone fool you. De-stemming grapes by hand is a LOT of work. And crushing them by hand to get the juices going (so you can put a campden tablet in the juice to kill all the nasties before you go to pitch the yeast) is hard on your hands also, particularly if you have a touch of arthritis in them. Which I do. 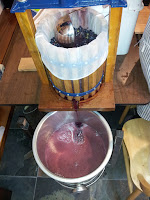 Eventually over a couple of days we got enough grapes crushed and juiced to make up a full fermenter of wine must.  I have to thank Steve (and did) for all his help because he knows what he's doing with a fermenter and with the sanitation of all things fermenting-related.  We finally pitched the yeast, and are now on the way to having somewhere around five gallons of wine in the near future. Or wine vinegar. We could be making a lifetime supply of wine vinegar.

The grape I chose to grow is called Marechal Foch, and I chose it because it handles cold really well. It's grown in upstate New York and Canada, so that should give you some idea of the kind of cold they can handle. What I didn't know when I bought them was that the grapes themselves are very small, and are subject to bird pressure. Nuts.  Then it occurred to me that I didn't know what the wine was supposed to taste like.  I looked online for where I could either taste some or buy some nearby and luckily there were two wineries fairly close by that had it, so one day early this summer Steve drove me out to Newberg, Oregon to the Purple Cow Winery where I had my first taste of Marechal Foch wine. Which I did not like. Double nuts.  Didn't stop me from buying a bottle to put down; the vintner said that it would be much better in eight years, which puts us at 2025.  Then Steve drove me to August Cellars, where the Marechal Foch I tried there was a little better, but that was because it was older.  I bought a bottle that was ready to drink now, but it is lying under the dresser in my bedroom with the Purple Cow because I am not opening the August Cellars until I've lost ten pounds.  Which means by the time I get to it, it will probably be a LOT better.

So it looked like I was going to have to find a place to store a bunch of wine while it sat awhile becoming drinkable.  The only person I know with a basement and plenty of room is my sister-in-law, and she lives five hours away.  That would certainly keep me out of the wine while it aged.   Fortunately, I ran across a PDF on how to make wine with Marechal Foch and Millot grapes, and it said that you can make a blush with them.  I really like a dry rose, so I researched making blush wines, which sounded like a lot less trouble than a red, so that's what we did.

The must is happily bubbling away in one of Steve's stainless steel fermenters in the kitchen.  It's been bubbling pretty steadily at the same pace for a few days now, so it's not slowing down yet. Once the bubbling has stopped, the fermenting is over, and we'll let it sit in there for another month before we go to bottle.

Whether we bottle wine or vinegar remains to be seen.