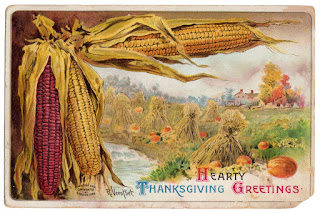 Today we leave town for Thanksgiving with friends in Seattle. I am greatly looking forward to a change of scenery and hanging out with fun and interesting people.  Oh yeah- and the food. Thanksgiving is one of those holidays where if you have to spend it alone, it helps to remember that even though any holiday is better spent with other people, this one really isn't about being with a crowd.  It's about being grateful for what you have, whatever it is. Obviously, some people have more to be grateful for than others, but a sincere spirit of gratitude applied to every circumstance makes even that disparity disappear.  It also plays nicely with that difficult child- the idea of 'enough'.

I have found over the years that keeping a grateful frame of mind is the best balm for a stormy spirit, and there have been many times when my spirit has been less than chipper and gratitude put everything back into perspective for me.  It's hard to stay worked up about things gone wrong when you're bearing in mind all the little wonderful elements that make up your life. You could be grateful for people, things, achievements, experiences, even things you don't think about like your native intelligence or the fact that both your legs meet the ground at the same time, if indeed, your legs do meet the ground at the same time. Fortunately, mine do, and yes, I'm grateful for that.  I especially like to remember to be grateful for all the blessings that I don't even know about. The behind-the-scenes stuff that works to help me get on with life. I even frequently take a moment to be grateful when I just have a good idea. I'm not lying.

In any case, gratitude is not just for Thanksgiving. It's nice to have this holiday, but anyone can reap the simple benefits of gratitude at anytime.

Wherever your Thanksgiving holiday takes you, and however you spend it, my sincerest hearty good wishes for peace and plenty.

Are you tracking everything you spend?

I am. I even note down my library fines.  This is why I know that out of the thirty thousand dollars that I have every year with which to manage the household, I am probably not going to bring in the end of the year on budget. If I did, it would be a book-cooking miracle. But I know that it ain’t gonna happen.

At this point, I’m just trying to see how close to thirty thousand I can get. The first year I started this particular stat was 2014, and that year came in at a little over thirty-one thousand.  Thank goodness for savings accounts. 2015 came in six percent higher than 2014, and 2016 came in two percent higher than 2015.  Since I’m trying to get our expenditures down to where we can take care of them with interest income (hah! I say), this is 180 degrees in the wrong direction.  I can’t tell if it’s because stuff is higher than it was two years ago or if I just suck at it, but I will cop to not doing a  good job. I know it's mostly my failure. So yeah, I suck.

The sad part is, we don’t have mortgage or rent to pay. We don’t have kids. Our electric bill is only $11.82 every month, which allows us connection to the grid which we currently use as a big battery (no pun intended). So why is it taking so much money to get through the month? We only go out to shop for food like once a week, and between that and sporadic trips for lumber or something, we hardly ever have to fill the vehicles. I think we buy gas for each vehicle only once a month.

How are people with kids and mortgages and commutes managing?

This morning I was mentally preparing myself for an unwanted trip to the grocery store but figured  I should go see if anything was ready in the garden instead, just in case.  That was a good move, because I think I got enough out of it today to last a few more days, in which time maybe something else will be ready enough to harvest. If I can get most of our vegetables from it, it will really help.  We only eat twice a day, but we eat vegetables with every meal, so we go through them pretty fast.

The winter garden will in all likelihood not last beyond the end of the year if it even lasts that long, but if it helps me squeak out the rest of this year, it will still have been a very good thing. And it is helping. This morning proved it.