I'm really glad I got that done, because Monday night wound up being 31F,  and Tuesday was 34; last night we finally had our first frost of the season.  This means that the kale and parsnips will now be sweeter, and it means that I won't lose my beets, because they're covered!

Putting the Squirrels on Notice!

I got the garlic planted on October 25, and felt pretty smug about it, which was a mistake.  Some few weeks later I noticed a squirrel roaming around the garlic bed, and then the next day, saw regular little divots where the little fucker had dug up all my cloves.

And I know he got all of them because they should have been up by now and not a one came up. 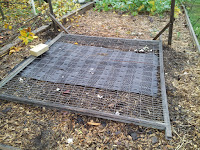 So this week, I got them planted again, only this time I put in the squirrel-deterrent, otherwise known as half a compost plastic with a trellis planted over it. And a brick, for good measure.

I'm putting all the squirrels on notice that I've just learned how to easily kill a bunch of them, and from what I've read, squirrel is delicious; somewhat nutty and sweeter than chicken.

I wonder how it tastes with garlic.
Posted by Paula at 4:08 PM 1 comment:

We Fired Our ISP and Here's Why

We were Comcast customers up until yesterday, but their rates had gone up.  Again.

We were already on the lowest tier for services, being the frugal people that we are (our internet and cable were bundled together), but somehow just having the bill go up again and not getting anything extra for it really irritated me. Then I happened to see a click bait ad that said, "Fire your cable company- get an antenna!", which got me to thinking.

We really needed to look into replacing what we had with a cheaper option, so I pitched it to Steve.  Couldn't we make it work? There weren't that many broadcast shows that we watch. We mainly use other services for most of our entertainment, including borrowing a lot of movies for free from our very good public library.

Steve already has a different ISP for working from home for which his employer is paying. So he looked into the antenna and he looked into getting another line run to his office.  The antenna was around $50, and a separate, dedicated line for our internet would cost us $45 a month, plus the incidental, egregiously unwarranted surcharges, so say $52 a month when all is said and done. For life. No more rate increases.  Now granted, we'll be stuck at the speed for which we signed up, but we can always change later if that's what we decide we need to do.  So I reckon we'll be saving fifty-eight dollars a month, which is $696 a year, or, if you think like Mr. Money Mustache does, $6,960 over the course of ten years.

That's a lot of money.

From everything I've read about canceling your service with Comcast, the way to avoid a long, tedious, frustrating, and ultimately un-successful conversation with one of their customer retention employees is to tell them you are moving out of the country.  If you tell them you're moving in with someone with internet service, they'll evidently ask you who the service is with and then they'll verify it. If you tell them you're moving to an area that doesn't have Comcast coverage, they'll ask you where and then verify that it doesn't. If you tell them you're moving, they'll ask if there will be anyone else staying there that would need internet service.  We had our story straight- we were moving to Germany and if Steve got any flak, he could 'lose it' in German in their office for added believability.  He never did get the expected blow-back, and I can't account for it. Maybe the customer retention dude wasn't in that day...I dunno.  But we were relieved to be let off so easily, after reading item after item about what a nightmare canceling your service with Comcast is.  We have the receipt for returning the cable box scanned and saved, and Steve received an acknowledgment for its return in his email, which is also parked in a safe place.  And prior to going into the office, he took our account off automatic payment, so we can expect a pro-rated bill toward the end of the month, according to the Comcast employee Steve talked to.  It won't be just for the six or so days since the start of the billing period because there is a base rate, but it should be around $25 or so.

We've been using the new ISP and antenna since Monday, and so far everything seems to be okay (although there have been a couple of times that Steve has cried,"what have you done to us woman?").  There are admittedly a couple of adjustments we'll have to make, and I'll have to learn the new remote, but I figure that these are small prices to pay for the savings we'll be reaping over the course of, oh, the rest of our lives, but in the long run, any bumps we hit now will be quickly forgotten.